"Game of Thrones" recap: Is there hope for Westeros after all?

An important alliance might be on the southern horizon, but up north on the Wall, two powers collide 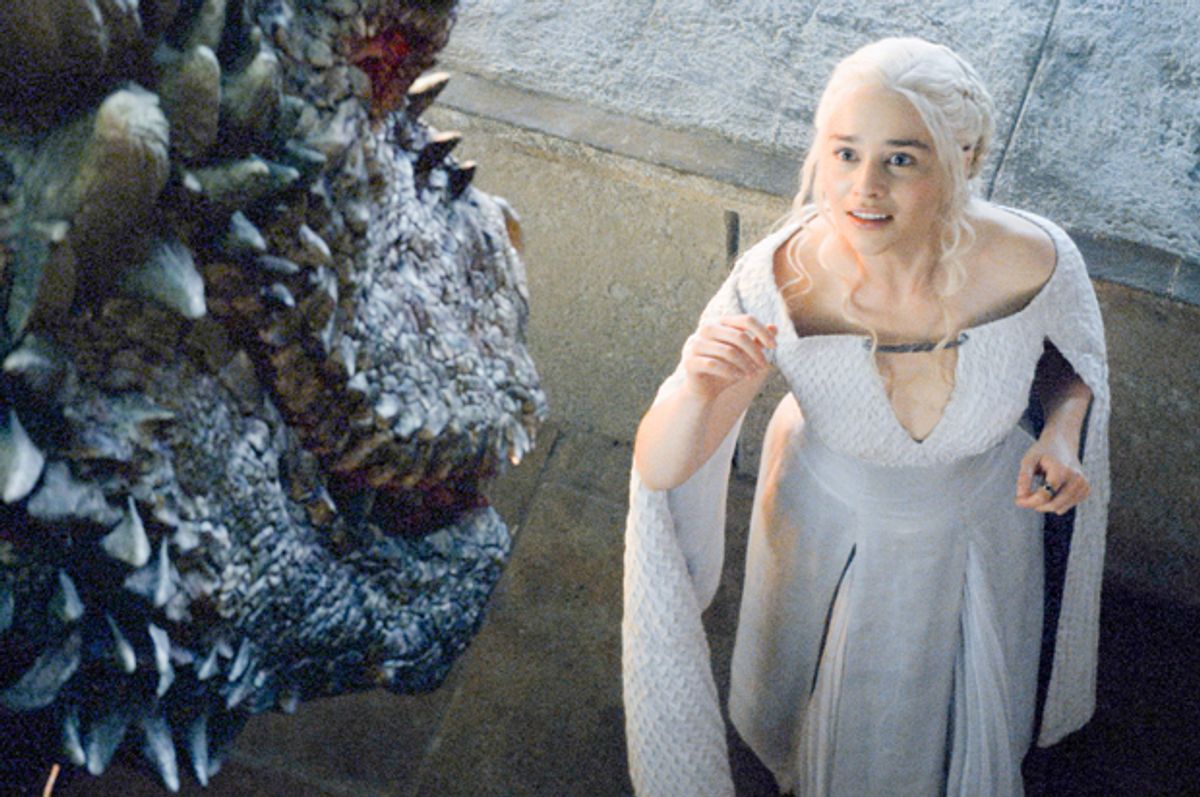 As dour as "Game of Thrones" can be in even its brightest episodes, few hours in its run can rival the sheer level of foreboding permeating nearly every moment of the fifth season premiere, “The Wars to Come.”

Practically every scene in the episode is suffused with a desperate anxiety, a hopelessness that has seeped into the characters' bones like the chill of a winter that won’t end. Westeros is crumbling, trapped as a perpetually war-torn continent. But the most interesting element to come from all this strife is how pervasive the fear of uncertainty is. It doesn’t defer to rank or status. The powerful and the powerless are similarly afflicted. No one is spared of the creeping malaise and subtle terror of true hopelessness.

This dull ache is unsettling to watch, not because it repeatedly hits the same emotional notes like a particularly derivative Philip Glass composition, but because of how familiar it feels. It’s a bit like a lingering nightmare. The premiere is disquieting because, once you get past the costumes and accents, it felt a bit too much like watching the news.

That’s an oversimplification, but not as extreme as you might expect. Take Cersei and Jaime arguing over the body of their father, for instance. The two exchange paranoid whispers about how all of their allies are waiting for them to show the first sign of weakness so they can pounce. It’s a familiar exercise, the powerful doing whatever they must to keep the power they so desire, even if it drives them mad.

Sansa, once a soft, simpering girl, is morphing into a powerful woman, but the cost is so high. The lessons she learns in manipulation and survival come from a dangerous source that cannot be trusted (i.e., Littlefinger), and it remains to be seen whether she can remain the good person she has always been while simultaneously becoming someone strong enough to weather the heart of the coming winter.

Meanwhile, both Jon Snow and Daenerys struggle to walk the line between the justice and moral certainty they seek to preserve and the burden of being something beyond an inspirational figurehead and more akin to an effective leader. In Dany’s case, she tries to govern an unfamiliar people, assuming that what worked before would work now and rather willfully ignoring the reading of any kind of political tea leaves as to how the situation should be dealt with. As though that weren’t complicated enough, her magical, goat-killing dragon mood rings are still acting out, angsty teenagers that she can’t control any better than she can her new subjects.

Jon, on the other hand, serves as Stannis’ diplomatic go-between, begging Mance Rayder to bend the knee and bring the wildlings to serve on the side of the Baratheon army. Jon does as he’s instructed because he fears for his friend’s life, but Mance refuses. It’s not his people’s job to fight another man’s war, a sentiment that is almost as resonant as the moment when Jon tells Stannis that the only thing the wildlings did wrong was being born on the other side of the wall. Both statements resonate with any number of political battles currently being waged in the United States, be it the ongoing arguments over immigration policy or lingering threat of foreign wars.

But the point is never more pointedly distilled than it is in the scenes between Tyrion and Varys. Having finally reached the safety of Targaryen supporter Illyrio Mopatis’ home in Pentos, after Varys secreted Tyrion out of Westeros, the dwarf is released from his hiding crate and sets about drinking, while he and Varys engage in an ongoing discussion about the fate of their land. Varys pointedly wants to discuss the future of the Seven Kingdoms, to which Tyrion replies, “The future is shit. Just like the past,” before vomiting and beginning to drink again.

In a single moment, Tyrion summarizes the current political climate for any number of individuals. The future is shit. The past is shit. Drinking makes you vomit. Vomiting makes you want to drink. Politics and alcoholism are similar ouroboros situations. It’s impossible to tell where the snake begins and where it ends.

Tyrion is not just hopeless; he’s indifferent. And he’s not alone. Throughout the Seven Kingdoms and beyond, people are settling into an empty malaise that fills the gaping hole that depression and grief leave in their wake. Though he’d like to believe himself a pessimist, Tyrion has always been too much of a realist, which is what makes him such a perfect foil for the one man in the world who still believes that something better awaits the country that he loves.

Varys’ former position of Master of Whisperers had him dealing almost exclusively behind the scenes, trading in illicit information, surely one of the most cynicism-inducing assignments in the realm. But now that he’s free from the bonds of forced loyalty and on the lam with a traitor, Varys has become an even more unique figure within the show’s universe. Though as concerned for the future as any other resident, he now deals in something more dangerous and insidious than secrets: he’s pushing the audacity of hope.

Each time we see Varys in the premiere, he gently guides Tyrion through his grief urging him to join in his search for a savior for their broken land. Varys yearns for a land where the powerful do not prey on the powerless, and Tyrion dismisses the thought, telling him that this is the way it’s always been. In response, Varys offers, “Perhaps we’ve grown so used to horror, we’ve forgotten there’s any other way.”

There’s a reason people stop watching the news. Sometimes, looking out the window at the world around you becomes too horrible to bear, and this is when life is never more dangerous. What happens when people stop talking about, caring about, and paying attention to the horrors in the world around them is that things get even worse.

What Varys understands inherently, and what he’ll hopefully bring Tyrion around on in short order, is the fact that the only way to get people organized and motivated and focused, is to give them something to believe in, something to hope for. What Varys finds in the tales he hears of the precipitous rise of Daenerys Targaryen is not just the fire of her dragons, but the spark she ignites in those in her care. If hope is a product and Varys its pitchman, then Dany will be the face.

Now they just have to agree to terms and sell, sell, sell.

Despite having read a few of the early books of the series, these weekly reviews will not be incorporating book-only material into them, making them safe for those who’ve only experienced the show itself.

Dany says that she’s not a politician, she’s a queen. That’s all well and good, but it seems like some political knowhow would have come in handy this episode.

Jon takes mercy on his friend Mance and shoots him in the heart while he’s being burned alive, putting him out of his misery. I expect Stannis will be underwhelmed and, really, wouldn’t Mance have suffocated by that point anyway?

There seemed to be equal representation of boobs to (male) butts in this episode. Let’s hear it for equal opportunity sexposition!

The casting of young Cersei for the opening scene was some of the best the show’s ever done. She was the spitting image of Joffrey.

Tywin’s eye stones made him look like a pet rock with the glued on googly eyes.

Speaking of the "Game of Thrones" relation to current American politics, I’m wondering where the show is going to end up with regards to the wisdom of the dynasty.

*not appearing in Season Five