"Live long and f**k off": The 10 best insults and one-liners from last night's "Veep" premiere

The gang is back, baby! 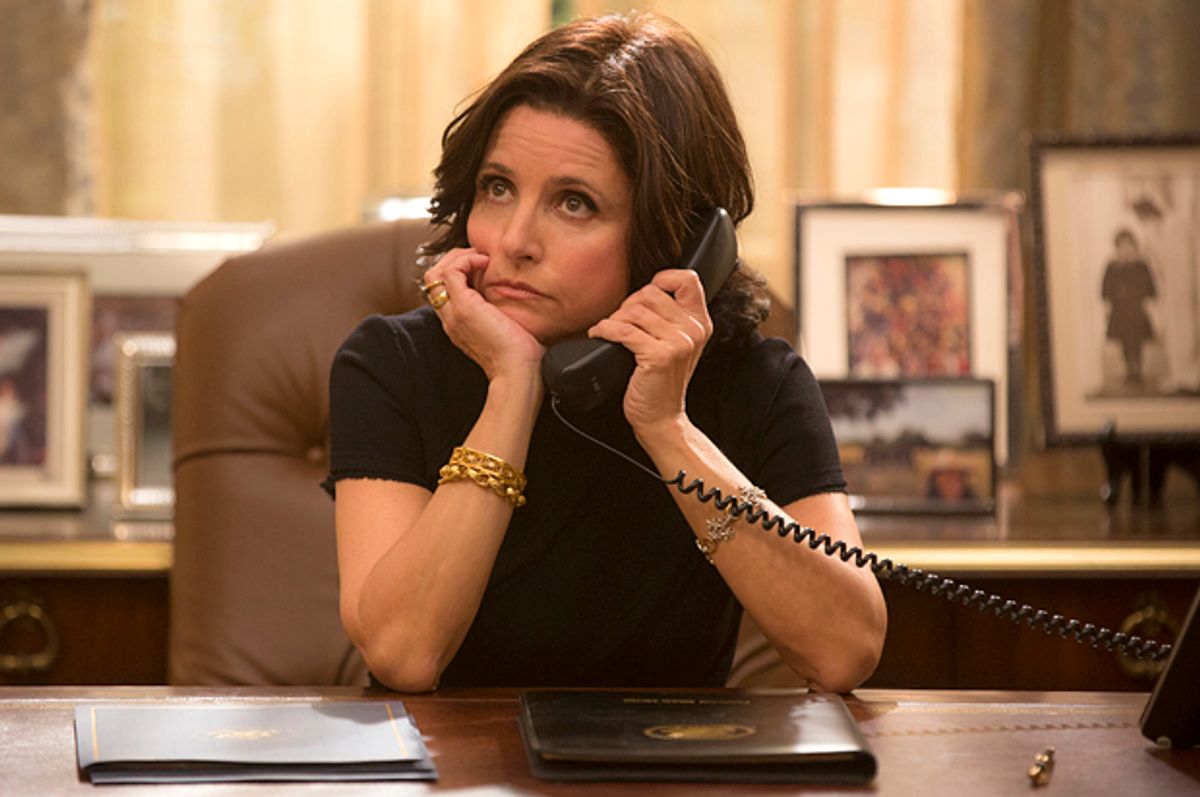 "Veep" returned for its fourth season last night, and, despite Selina's promotion to POTUS, things are blessedly the same as they ever were: Everyone is still incompetent and/or awful, Jonah is still an insufferable doofus, and Selina's staff are still coming up with increasingly elaborate ways to insult each other. Here are the best disses, one-liners and put-downs from last night's premiere. (Bonus points to Dan Bakkedahl's Congressman Roger Furlong, who had by far the zippiest barbs of the evening).

1. Mike: "Sue, does the President have any spare time this afternoon for an extra speechwriting meeting?"
Sue: "Can mice levitate, Mike? Can mice levitate and fire lasers out of their mouse eyes? Well then we've just asked each other equally ridiculous questions."

2. Amy: "Is this about the submarine jobs?"
Roger: "Ten fucking points to Elsa the Ice Queen."
Kent: "Shall we recalibrate our language, Roger?"
Roger: It's congressman Furlong to you, Grey Elvis."

3. Roger, to Selina's staff: “You can wave bye bye to the Families First bill because the lawmakers in these distrcits are going to Vulcan death grip you to fuck. Live long and fuck off!"

5. Jonah, to Selina's staff: "If any of you new bitch puppies need help finding the mommy teets around here, you can just ask a West Wing vet."

6. Ben: “So you ready for these buzz-cut bozos?"
Selina: "What are you talking about? I’m used to dealing with angry, aggressive, dysfunctional men -- ie. men."
Ben: "Well that's what we do best, that and farting during first communions."
Selina: "That's funny, I don't really think of you as a man."

7. Bill, to Amy: “This is a nice room, for a lonely suicide or an affair with your secretary”

8.  Ben, to Selina: "The Joint Chiefs are on their way, we should hear their big clanking balls any second and then all the paintings will fall off the walls"

10. Roger, to Jonah: “This is a man hang now, it doesnt reek of moisturiser and vaginal spray anymore. And that was just Dan.”