Rand Paul's Benghazi insanity: Why the 2016 contender is campaigning on crazy 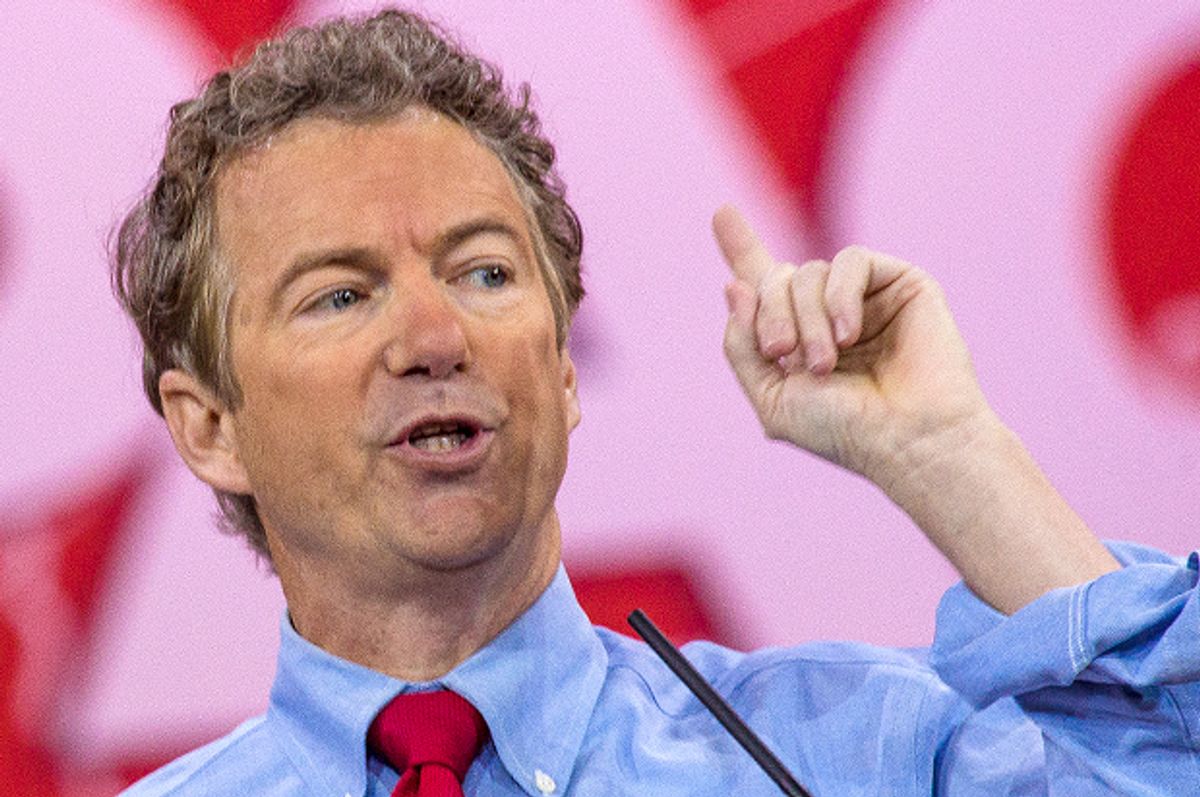 Hillary Clinton is officially running for president, and that means the blissful hiatus in Republican Benghazi hysterics we’ve been enjoying of late has now come to a close. The Republican members of the House Select Committee on Benghazi are promising reporters that Hillary’s transition from presumed to declared 2016 candidate won’t have any influence on their quest for the truth – which is amusing given that the committee exists largely to keep Benghazi alive as an issue while Hillary Clinton runs for president. The recent flap over Clinton’s email practices while at State has given committee chair Trey Gowdy the excuse he needed to turn the investigation to matters that are (in his words) “broader than Benghazi” and shift the focus from Benghazi to Hillary herself.

This is welcome news for Rand Paul, who’s spent years establishing himself as one of Clinton’s chief Benghazi antagonists. Appearing on CNN’s “State of the Union” a few hours before Hillary released her announcement video, Rand was asked by host Dana Bash if he thought Clinton had any successes during her time as Secretary of State. He answered by churning out a canned line on the Benghazi attacks:

She didn't - she didn't provide the security, not just that day, for nine months.  Dozens and dozens of requests for more security, all completely ignored by Hillary Clinton.

Reminded by Bash that she was actually looking for him to identify something positive in Clinton’s record, Rand explained, hilariously, that he was “getting through the things that I remember that aren't so good and trying to think of something good.” As is so often the case when it comes to Republicans and Benghazi, Rand wasn’t in complete command of the facts – there’s no evidence Hillary denied or “ignored” security requests. But whatever! He got the Hillary-Benghazi talking point in there, and that’s what matters.

And he’s not stopping there. Yesterday Rand unleashed a weird tweetstorm micro-moneybomb thing to help pay for ads he wants to run in the early primary states about Hillary and Benghazi and other fun Clinton scandals.

So Rand is hardly a week into being a candidate for the Republican presidential nomination, and already he’s running against Hillary Clinton. Points for ambition, I suppose. He figured out a long time ago that attacking Hillary on Benghazi is a sure-fire way to generate headlines for yourself, and the fact that he’s calling back to the “3 a.m. phone call” nonsense means that he’s putting on a show for the political press.

But it’s also a cheap way for Rand to endear himself to conservatives who despise him for his foreign policy platform. Just last week, prominent conservatives and Republicans were attacking Rand over his criticisms of neocon foreign policy by arguing that he’d actually be worse than Hillary on national security. Outside groups are running ads claiming – not entirely truthfully – that he backs Barack Obama’s stance on negotiating over Iran’s nuclear program. Though he’s shifted markedly to the right during his time in the Senate, Rand is still the odd-man-out among 2016 Republicans when it comes to national security policy (with the possible exception of Ted Cruz) and he’s going to need to blunt some of the criticism he’s already taking from his own side. Benghazi and Hillary-bashing are two areas at least in which most conservatives find themselves in perfect alignment, and Rand can sell himself on the most basic level as “not Hillary.” It’s not much, but it’s better than nothing.