Sometimes, you can't love yourself at any size: How I lost 160 pounds

I made excuses for my gluttony, but in 20 months I lost the equivalent of another human -- and it wasn't that hard 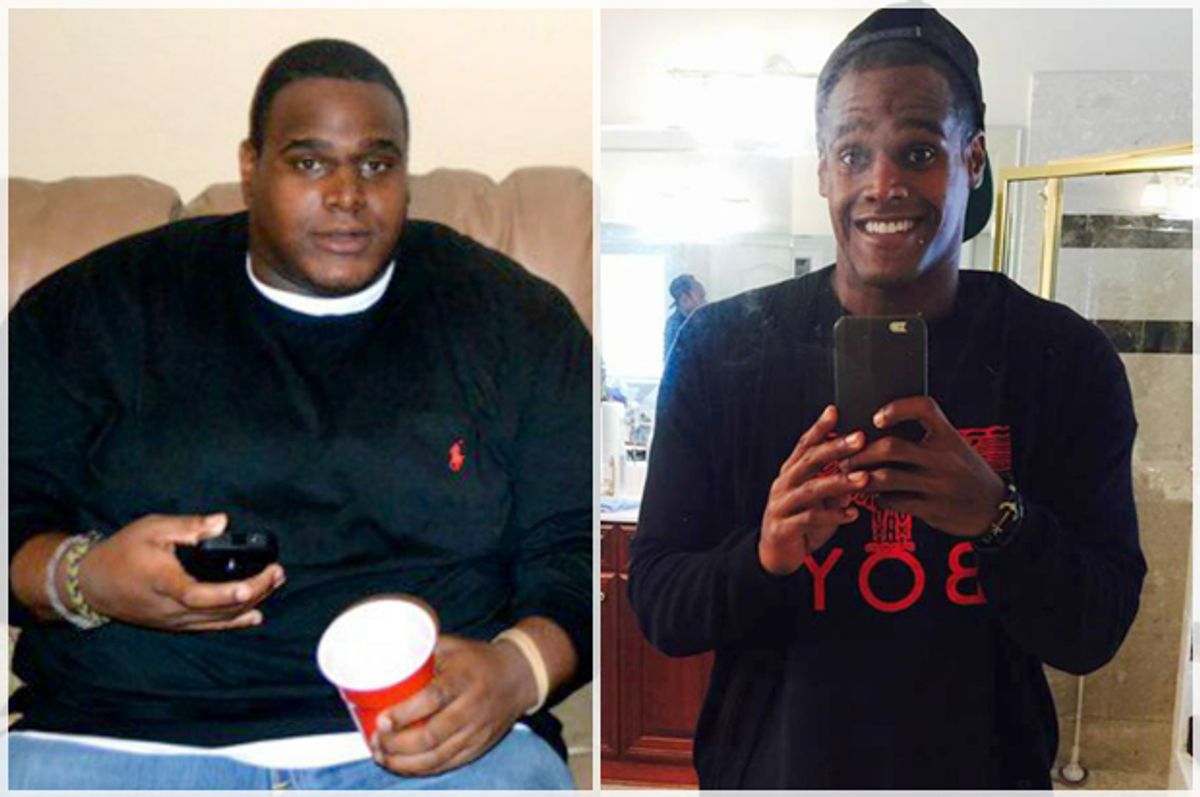 A photo of the author, before and after
--

In a year and a half, I essentially cut a whole person from my being. After my friends recovered from their shock, they started suggesting I tell people how I did it. Because, you know, obesity is an epidemic, and people need advice, and Jared Fogle makes bank. That could be you, they’ll say. But while a sponsorship from Chipotle or Sam’s—the foremost entities responsible for my 160-pound weight loss— does sound nice, the driving force behind my journey was never a Jillian Michaels-like celebrity, or free burrito bowls for life.

Rather, my dreams were simple: To buy off the rack and no longer perspire on a girl’s blouse when in close proximity; to feel at ease on furniture, and in plane seats, and theater chairs; to view staircases less as hostile threats and more like, well, steps; to stand in line for a roller coaster, or in the waiting room at the doctor’s office, without fretting; to have sex; to like myself; not to kick the bucket prematurely.

There are a lot of platitudes about weight. One of them is that you should love yourself no matter your size. I’m here to say that’s bullshit. Being fat sucks. I love myself way more now than I ever have.

Before you call me an asshole, let me first acknowledge a few complications about body image and shape. Some weight issues are simply the result of genetics, or biology. For some, their weight and/or figure may be outside of their governance. I’m not talking about them.

I’m talking to anyone who, like me, was consciously unrelenting in his or her pursuit of gluttony, and steadfast in balking at physical activity. I’m talking to people who have the audacity to lean on well-intentioned phrases like “love yourself at any weight” as a way to excuse their slothful lifestyle. For those who can do something about their size, and simply refuse to, trust me: Life is so much better on the other side.

At some point, food became my salvation—an inexpensive and easily accessible vice, far more socially acceptable than abusing drugs or alcohol, though potentially just as harmful. I can’t think of a specific catalyst. But as an only child with unabated access to nearly everything, my appetite grew insatiable. As I got older, I grew bigger. The freedom of college allowed constant ingress to food. Drive-thru runs occurred thrice daily, and sometimes four—the grease-stained bags holding contents that were both friend and foe. Unwittingly, I began a cycle common among people of bigger ilk, captured famously by Fat Bastard in “Austin Powers”: “I eat because I’m unhappy. I’m unhappy because I eat.”

My weight undermined nearly every aspect of my life, not least of which was my sex life. Playful banter quickly turned unnerving when a casual fling once mentioned my breathing habits during our hookups. My labored pants had made for awkward intimacy, she said. I foolishly thought she hadn’t noticed, or perhaps mistook it as an attempt by moi to spice up the moment. Truth is, I was winded; the shortness of breath came soon after I rounded first base. (This extended to all intimate moments, but no one else brought it up, God bless them.) I wasn’t really into these women, either, and so the encounters brought more shame than joy, leaving me reluctant to engage in the sharing of salacious stories common to male friends, which (fair or not) felt mandatory for our bonding. I was questioned about my lack of experience as well as, on a couple occasions, my sexuality.

I calmly fought off the ridicule, and later found comfort in a Whopper or Quarter Pounder. Though never morbid in thought — only in obesity— I struggled to enjoy a life that would have been seen by many as enviable. Excessively funded by my parents, I enrolled at one of America’s largest— and most partying-est—institutions. However, I often misappropriated my allowance to purchase food and snacks. Too fat or too embarrassed to pursue the social life I really wanted, I eventually became a hermit, wrapping myself up in my own self-pity.

I’ve never tried drugs, but I empathize with those addicted to the needle, or the pipe. I know what it feels like to be acutely aware your vice is killing you, or at the very least, keeping you from living your best life. You know these problems are caused by your addiction — by that thing, whatever it is — but you also know that thing is what can release you from these burdens. How do you break that cycle?

I made a few half-assed efforts over the years, each time falling short no matter the size of the carrot dangled in front of me: the promise of an extended football career in one instance, or a new car if I lost 40 pounds during one summer. But I couldn’t escape food’s gravitational pull.

What made me finally do it? I can’t say exactly. But the passing of time meant an accumulation of embarrassments and missed opportunities that became too much to bear. A Cinco De Mayo reunion with friends one year convinced me to give it a shot. My compadre, Joubert—whose figure once resembled mine—unveiled a shockingly svelte silhouette. My initial shock briefly gave way to jealousy, before morphing into inspiration. If he could do it, then I could, too. The following Monday, I went walking.

Some 20 months since committing myself, and after dropping a number in pounds equal to that of a welterweight boxer, the fruits of my labor taste as sweet as imagined.  I am no longer a person in hiding. I no longer feel judged when ordering a meal.

My female interactions, both IRL and on Tinder, have been far more fulfilling. Once exclusively the chaser, I am now for the first time, the chase-ee, a role that would have been unimaginable to me a few years ago. Inhaling and exhaling while kissing are done at regular intervals. Nights are spent flirting and flaunting, and if anything, I am probably leaning more toward arrogance these days. (An ego check is nigh, I’m sure of it.)

My only regret is not doing it sooner. Isn’t that always the case? I missed out on a lot. At 27 years old, the brown is just starting to impinge upon youth’s greenery, but I also feel like I made it just in time. After a lifetime of social uneasiness rooted in my girth, I’ve finally been granted access to comfort in my relative prime.

I am now, after years and years, my physical ideal — or at least close to it: a guy merely of normal frame and gait, unafraid of and unperturbed by the opposite sex and social settings, no longer bogged down by 354 pounds of lard, or sartorially burdened by a 48-inch waist, and 22.5-inch neck. I can shop inside H&M, one of many stores whose sizing charts once fell a few X’s too short for my figure. For the first time, physically, I fit in.

You may be wondering how I did it. It was quite simple, really. I swapped out double-doubles for rotisserie birds, and emptied the contents of my burritos into flour-less bowls. I took up almonds and pistachios, spinach and kale. It was a struggle at first, yes. But I kept picturing the endgame during walks, which slowly turned into runs. I tried and failed several times to finish a session of "Insanity," before becoming so adept at it that it bored me. But this essay was never supposed to be about dietary or exercise suggestions. Rather, it serves as proof that the status quo only remains intact should you let it, and that anything is possible, and that which you covet, be it superficial or practical, is often accessible. At 25 years old, I finally started my life — and no matter your current age or status, you can start yours, too. If a glutton can become sensible, and a sloth tirelessly active, then there’s no doubt … that could be you.

Alex Gray is a 27-year-old freelancer based in Atlanta. His work can be found in Paste, The Cauldron and SB Nation.