Every snide joke you've told about Ringo is wrong: The least-celebrated Beatle is finally getting the respect he deserves

Not even the best drummer in the Beatles? False! His Hall of Fame induction is long overdue 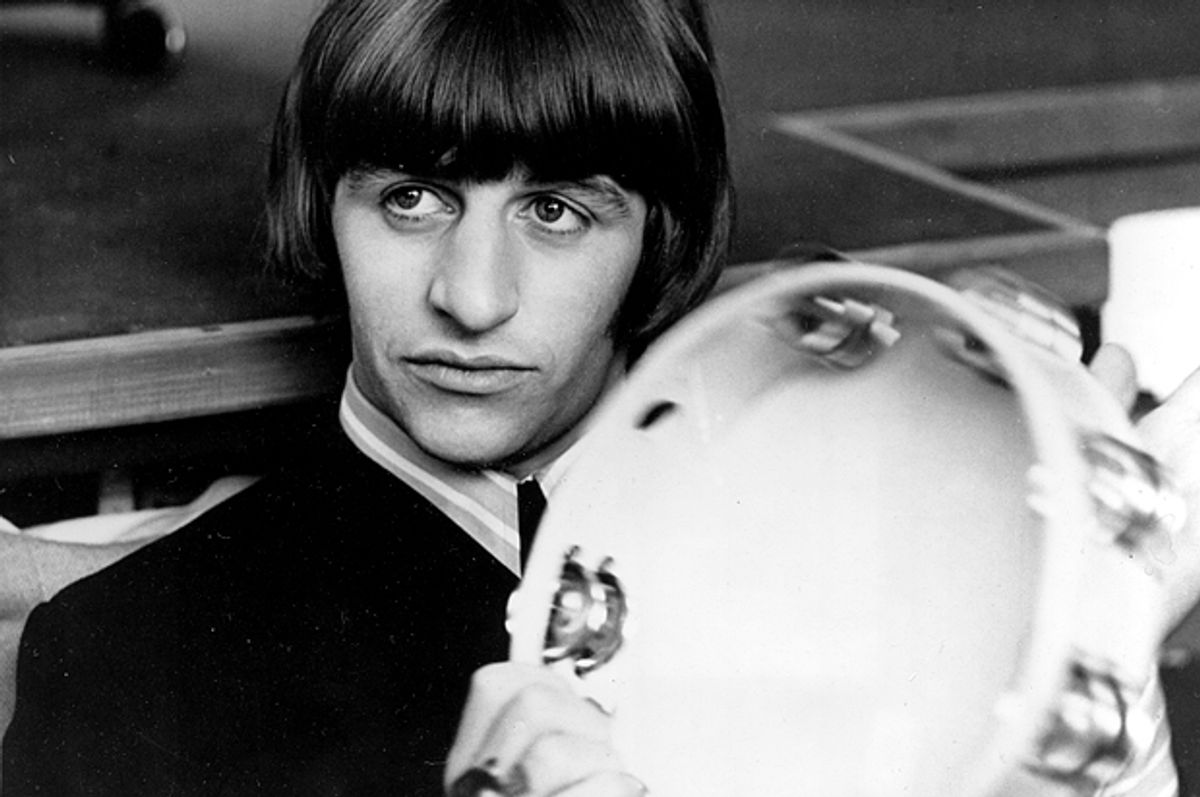 Somewhere in the world right now, there’s a drummer in a recording studio or rehearsal room being instructed to “play it like Ringo,” which is to say they’re being tasked with adding to a song the kind of tumbling fills that have a melody of their own (like the tom-tom break in “With a Little Help From My Friends”), give a tune a swinging feel that also rocks (think: “I Saw Her Standing There”), attack a number with psychedelic abandon (“Tomorrow Never Knows”), or perhaps apply all three of those elements to one song (“Rain”).

That parts Ringo Starr played roughly 50 years ago with the Beatles are still being used regularly as rhythmic points of reference and that “play it like Ringo” is a commonly used entry in the musical lexicon speaks to his considerable influence and lasting impact on the art of rock drumming. He was more than just the happy-go-lucky guy that kept steady time for the most important musical group ever, a combo that changed the course of culture in the space of about seven years. Ringo is the most important and influential rock drummer ever.

And now, because of his game-changing contributions to rock drumming, Ringo is getting a plaque of his own in Cleveland. The Rock and Roll Hall of Fame will honor the Beatles drummer with the Award for Musical Excellence on April 18 during induction ceremonies for the class of 2015.

Mock the Rock and Roll Hall of Fame all you want — from opting to induct Bruce Springsteen without the E Street Band because only Bruce’s name appeared on the album covers, to allowing Sammy Hagar to accept the award for Van Halen when original frontman David Lee Roth and the Van Halen brothers didn’t show at the band’s induction, to the institution’s murky induction criteria, we could sit here all week finding fault with the Hall — but they’re getting this one right by enshrining Ringo the drummer, not Ringo the solo artist. His run of early solo singles contained some certifiable classics (like “It Don’t Come Easy,” “Photograph” and “Back Off Boogaloo”) but it would be hard to justify solo Ringo as a Rock and Roll Hall of Famer when so much of his post-Beatles workload has involved playing casinos surrounded by members of Mr. Mister, Toto, Journey, the Romantics, Night Ranger and Men at Work in his All-Starr Band, and features records full of trite nostalgia like his latest, "Postcards From Paradise," whose title track name-checks 26 Beatles songs.

The Award for Musical Excellence (formerly the Sideman Award) Ringo will receive is a most appropriate way to recognize what he’s accomplished with his Ludwig drums. The award “honors musicians, songwriters and producers who have spent their life creating important and memorable music. Their originality, impact and influence have changed the course of music history. These artists have achieved the highest level of distinction that transcends time.”

There is no doubt that the man who helped the Beatles change the course of music history by keeping such tasteful time has contributed a body of rhythmic work that transcends time.

There was no “play it like Ringo” before Ringo – there was no “play it like…” any rock or pop drummer until the Beatles exploded and Ringo became the first household name rock drummer. Groups weren’t really a thing yet, and precious few knew or cared who was drumming on a particular song. First-call studio drumming legends like Earl Palmer and Hal Blaine were working steadily before the Beatles were putting out records, but they were hired-gun shadow figures, doing whatever was required from bandleaders and producers on the pop and R&B tracks they were recording. Ringo was the first rock drummer on the scene with a sound and style of his own, and a distinct feel that was embedded in his band’s songs. He was influenced by other drummers (you can definitely hear bits of Palmer and Blaine, along with the swing of jazz giants like Gene Krupa and Buddy Rich in his playing) but the way he played was pure Ringo. And it was basically ground zero for Rock Band Drumming.

He gave us the rapid-fire right hand on the hi-hats in songs like “I’m a Loser” and showed how a deep groove could be applied to both the ballads (“Let It Be”) and the rockers (“Taxman”). He introduced those fills-as-hooks that appeared from nowhere in the middle of a verse (like the snare-to-tom-tom pattern that follows ‘He blew his mind out in a car …’ in “A Day in the Life”), and those stoned-sounding cadences in songs like “I’m Only Sleeping” and “Strawberry Fields Forever” that helped to usher in the psychedelic rock era. He dropped on the world that groovy beat to “Ticket to Ride” (OK, the beat was Paul’s idea, but Ringo nailed it) that’s been copped by a million garage and power pop bands. He married a minimalist approach with maximum effort on the Abbey Road-medley capper “The End” to produce the most identifiable drum solo in history. He – the drummer! – even sang lead occasionally, for Pete Best’s sake! Above all, he introduced to rock 'n' roll drumming that Ringo Feel. You know that feel when you hear it. It’s a snappy, head-bobbing vibe when it’s up-tempo, and sits in a beautifully unhurried place just behind the beat at a slower pace. That feel was the secret ingredient to the Beatles sound.

Yet for some reason, Ringo’s role in the Beatles’ cultural impact seems to come with an asterisk — as if his only contribution was showing up to the gigs and recording sessions.  Some contend that Ringo is merely the luckiest man on earth — successful and notable only by his association with musical visionaries like John Lennon, Paul McCartney and George Harrison; that any old serviceable drummer would’ve been suitable for that lot.

I say this with peace and love: The Ringo detractors don’t know their ass from a hole in Blackburn, Lancashire. Technically speaking, no, Ringo is certainly not the best drummer in rock history. No one will ever confuse his unfussy approach to timekeeping with John Bonham’s raw power and monster groove, Neil Peart’s percussive wizardry or Bernard Purdie’s deep, precise pocket. (Purdie, incidentally, claims to appear uncredited on a number of Beatles tracks where Ringo is credited. Go down that internet rabbit hole at your own peril.)

But with the melodies, imagination and studio innovation the Beatles had at their disposal, they didn’t need a virtuoso drummer to help get their songs across — just one that knew his role as part of the ensemble, which Ringo did.  Live, he drove the band (there’s no better example of this than the Live at the BBC collection), and in the studio he glued all that boundary-smashing creativity together with a song-first sensibility that evolved with the sophistication of the songwriting. People like to mention how in the space of a couple of years Lennon and McCartney went from writing bubblegum-y love songs like “She Loves You” to deeper fare like “Nowhere Man.” But don’t forget Ringo matriculated from backbeat-focused playing to the more adventurous patterns of songs like “Baby You’re a Rich Man” and “She Said, She Said” in fairly short order as well.

It’s also worth noting that Ringo glued the Beatles together on a personal level. He was the lighthearted everyman in a roiling pit of personal agendas and outside influences.

Bottom line: He was a perfect fit for the Beatles. And he is most deserving of his singular place in the Rock and Roll Hall of Fame.