Opting out of the stressful, high-stakes test isn't so easy for many families 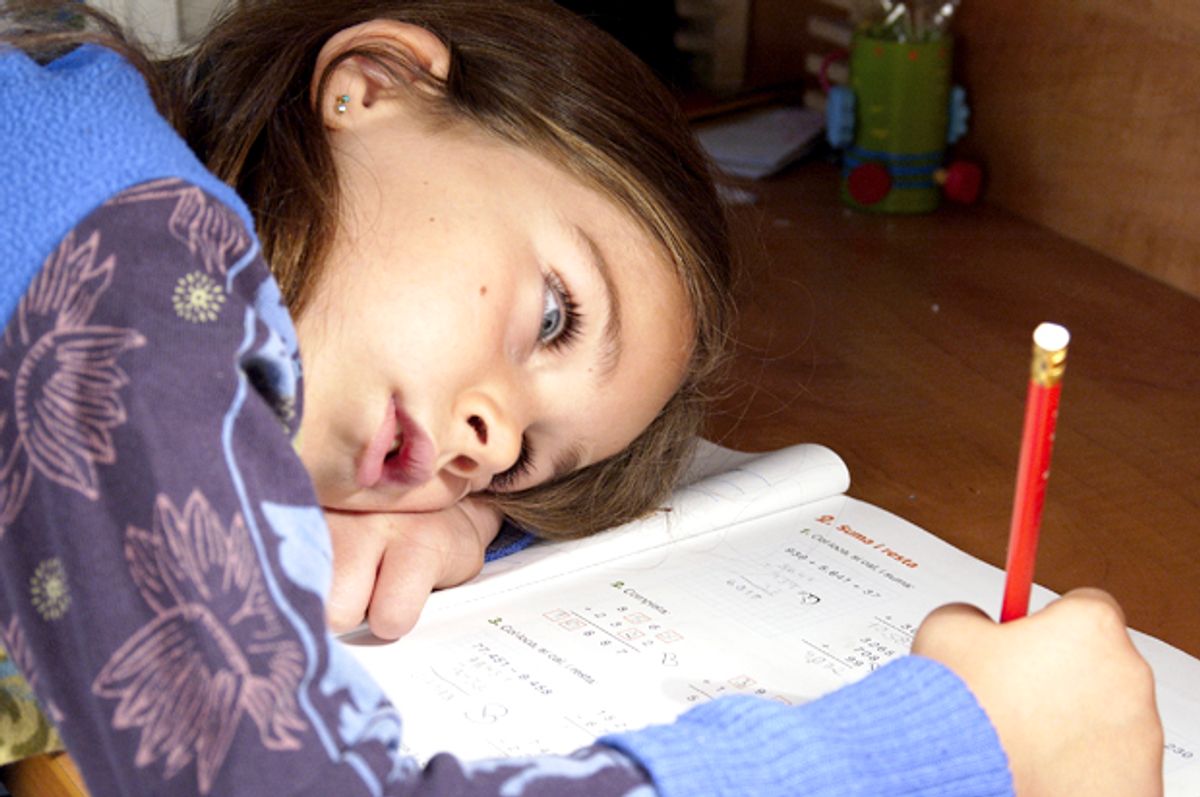 On Tuesday morning, my 11 year-old younger daughter went thorough the same routine she had performed on Monday morning. She woke up, got dressed, ate her breakfast, and broke down and cried. I expect the rest of the week to go pretty much the same way.

This week, New York state began the first part of its standardized testing for grade school students with the English language arts exams. And my daughter, a fifth grade student at a progressive, nurturing, "We don't teach to the test" public school, has been made to prepare for it — and stress out about it — all year long. "What if I fail?" she sobbed as she stirred her Cheerios. "Will I get left back? Will they let me go to middle school?" And though I did my best to assure her that the test doesn't matter, I knew the truth -- it does.

Like many public school parents, I am deeply frustrated with the Common Core and the ways in which individual school curriculums have been chipped away in favor of excessive test prep. I have been demoralized watching our school's students attend "prep rally" events designed to whip up their enthusiasm for a process its own administration has vocally taken issue with. I am enraged when I think of how many teachers in my small circle of friends are afraid of the professional consequences they face if their students' test scores aren't up to snuff, and how many of our children are too exhausted and anxious to enjoy the other aspects of their lives, because their academic year boils down to how they perform on a handful of days in April. I am enraged, because I know we are just a microcosm — and the same scenes are being played out all across the country. I am enraged when I think how profitable all this suffering is for publishers like Pearson. I find the culture in which our children are being educated in this country right now, by and large, sickening.

In our state last year, over 60,000 students did not take the tests. Even more are expected this year. And yet, I did not tell my daughter she could stay home this week. Our family is not among the growing population choosing to opt out. As so often happens here in the real world, conviction has to be tempered with an understanding of the consequences. And that's a huge part of what makes our current system of testing so exasperating — the fact that whether we like it or not, there are repercussions for not playing ball. The state Education Department this week warned that "districts with a student participation rate lower than 95 percent could face potentially significant consequences." Spokesman Jonathan Burman chillingly told the Journal News Monday, "When a district fails to ensure that students participate in required state assessments, the state education agency is expected to consider imposing sanctions on that district, including — in the most egregious cases — withholding programmatic funds." And our children's educational opportunities often come down to how well they perform too.

Opting out is a gamble. Here in New York, public school students must apply to middle and high school. The more academically competitive schools field hundreds, sometimes thousand of applicants from the five boroughs for a limited number of spots. At my older daughter's school — another progressive, "We don't teach to the test" institution -- each grade has roughly sixty students. But other public schools, ones that cap at similar class sizes, do look very closely at the student scores. We're not talking Ivy League track, elite private schools here, by the way. We're talking just solid, enriching public schools. And if you happen to live in a vastly underfunded district like mine, where the local middle and high school options are improving but not always a sure thing, you have to take a long view. The cold reality is that opting out is for many parents a luxury they can't afford. We don't live in a bubble in which the test doesn't matter.

So this week, and then again later this month when it's math testing time, I am sending a crying child off to school. I'll do my best to reassure her it'll all work out and that it'll be over soon. But I am tired of feeling like our kids and our teachers are pawns here, and that we're being punished if we object to a system that is so inherently broken. I'm tired of having the choice between a stressed out kid and a kid whose school choices are restricted. This isn't college admissions. This is happening to grade school aged children, starting in third grade. And as a father of two public school students told the New York Times this week, "I would like to think that I would have the courage of my convictions, but can I really do that when it means I’m gambling with my kids’ futures?"