Bromance with a murderer: The bizarre true story behind James Franco's "True Story" 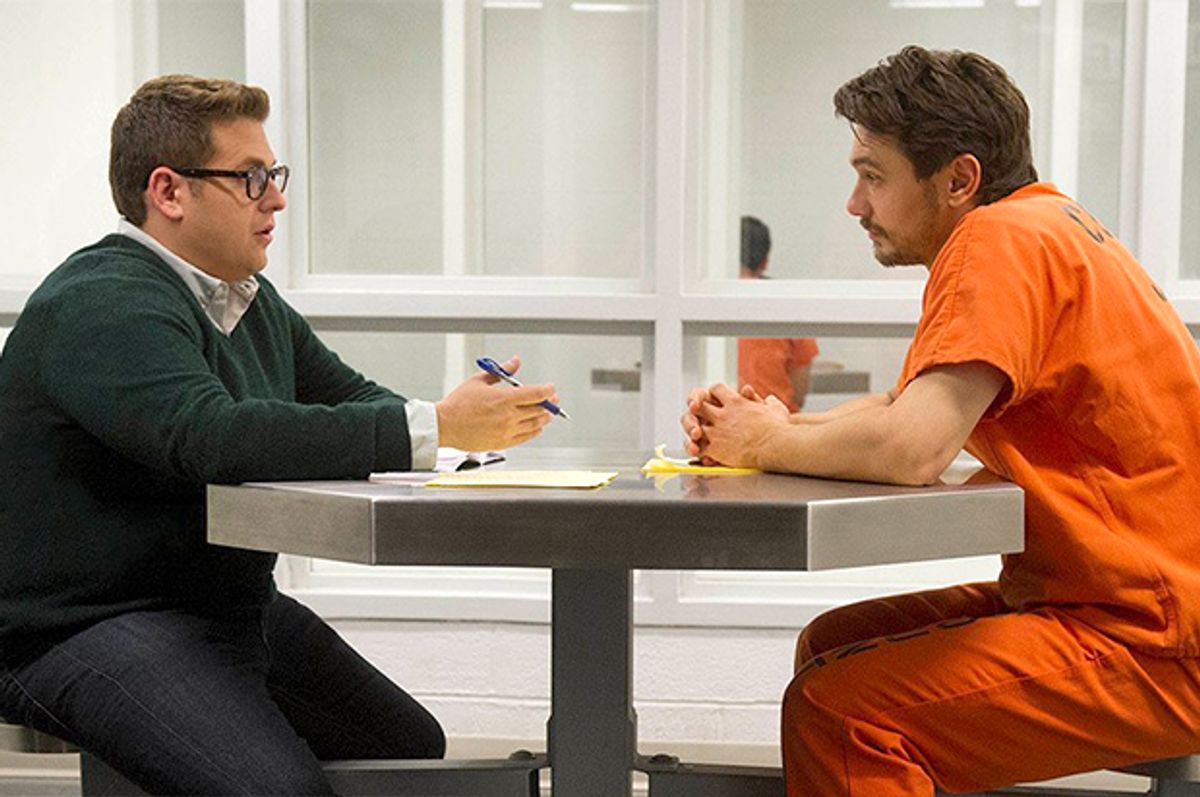 “Did you do it?” murmurs the dead-eyed, handsome multiple-murder suspect to the wide-eyed, credulous reporter who’s supposed to be there to interview him, but who actually has other goals in mind. The reporter, a real person named Michael Finkel who is played by Jonah Hill in the movie “True Story,” has enough presence of mind to observe that he should be asking Christian Longo (James Franco) that same question. But not enough to stop himself from walking into Longo’s trap, even though he knows it’s a trap. This isn’t in the movie, but the real Mike Finkel had been warned by a forensic psychologist that Longo was a dangerous person who suffered from a narcissistic personality disorder and was a pathological liar. For someone like him, the psychologist wrote, “Lying is their nature. Not just their second nature, but their nature. Beware of their snares.”

The true story of “True Story,” which Finkel recounted in his 2005 memoir of the same title (and which I wrote about at the time), is so bizarre and so overloaded with inscrutable meaning that no movie could possibly do it justice. It’s a plot Charles Dickens would have rejected as overly melodramatic and implausible. Finkel was a star reporter for the New York Times who was fired after faking central details in a Sunday magazine cover story (under circumstances far more anguished, and more damning, than are depicted here). Days later he learned that Longo, a fugitive suspected of murdering his wife and three children in Oregon, had been arrested in Mexico – where he had been telling everyone he met that he was Michael Finkel of the New York Times. Finkel embraced this coincidence as a gift from God – “the journalistic equivalent of a winning lottery ticket,” in his phrase – when it might have been more prudent to suspect that the gift came from another party entirely.

What we have here, in a mid-budget indie adaptation from British writer-director Rupert Goold (who rewrote an original screenplay by David Kajganich), is an intermittently effective psychological drama, sometimes buoyed and sometimes bogged down by the presence of two stars better known for comedy. Franco always excels at playing duplicitous characters; in his portrayal of Longo, the Oregon killer is a sinister distant cousin to Alien in “Spring Breakers,” Mr. B in “Palo Alto” and even the unctuous and self-involved James Franco of “This Is the End.” In Franco’s best scenes with Hill, you can feel Goold almost (but not quite) liberating this unlikely narrative from its anguished true-crime roots and turning it into a species of pitch-black comedy.

A real story in which a sociopath kills three children is by definition not funny, but Longo’s jailhouse tête-à-tête sessions with Finkel, as we see them here, are full of delicious possibility. Franco is by turns seductive, introspective, apologetic and achingly sincere or mock-sincere (since with this guy there is no difference). By showing us two actors together in physical space, Goold brings out the element of homoerotic and/or narcissistic attraction between Longo and Finkel, which was certainly present in the latter’s book but a bit submerged beneath the self-castigation and intellectual argumentation. Longo was an aspiring writer who had memorized snatches of Finkel’s prose, and daydreamed about what “the real life of Michael Finkel must be like.” For his part, Finkel was pretty sick of his own real life and his journalistic disgrace, and openly envied the suave and handsome Longo’s success with women. (When he was apprehended in Cancún, Longo was cohabiting with a German photographer – who believed her new lover was named Mike Finkel.)

Viewers may be forgiven for assuming that the filmmakers have sensationalized the real story of Mike Finkel and Chris Longo for dramatic purposes. Certainly events have been compressed and truncated somewhat (and locations in and around New York City are substituted for Oregon, with moderate success), but if anything the opposite is true. Looking back at Finkel’s book after 10 years, I feel even more strongly than I did then that it contains object lessons not just for journalists but for human beings – and I feel the same impulse to punch him out and praise him to the skies.

Finkel’s memoir is a remarkable mea culpa in which he accepts full responsibility for his journalistic misdeeds, never attempting to deflect blame onto his bosses or the artificial conventions of journalism (although in retrospect I would say those things played a role). In his falsified Times Magazine story about a boy enslaved on an African cocoa plantation, and his subsequent attempts to cover for his lies (not mentioned in the film), Finkel identifies in them the symptoms of a larger pattern of troubling behavior in other areas of his life. But how did Finkel seek redemption for these sins? By forging an intense and mutually dependent friendship with the murder suspect who had impersonated him -- a man he had every reason to believe had killed four people, including a 5-year-old boy and 3-year-old girl who had been dropped off a bridge into a pond, while they were asleep, with pillowcases full of rocks tied to their ankles. There isn’t enough self-recrimination available anywhere – not in Mike Finkel, not in St. Augustine -- to cover all the implications of that.

On one hand, I entirely agree with what Finkel tells his wife in the movie: Everyone, no matter what they have done, has a story and deserves to have it heard by someone. Was it crossing an ethical line for Finkel to buy Longo a subscription to the New Yorker, or send him books by David Foster Wallace? That’s easy for us to say from here. Even in my own far more limited experience as a reporter, I’ve had the disorienting sensation of believing that I was being lied to by someone who had done bad things, and wanting for narrative purposes to believe that person’s lies or at least suspend my better judgment. And it is easy, far too easy, to become sucked in by those narrative possibilities and lose your moral compass altogether.

When Finkel, in his book, announces that he hates Longo and wants nothing more to do with him, it isn’t because he finally understands that Longo is a liar and a murderer, since that has been obvious all the way along. It’s because he feels that Longo has betrayed him personally, and betrayed the narrative. As I wrote in 2005, Finkel wanted a convincing and enlightening story that would provide the surprise ending to a true-crime bestseller, and was crushed to learn that no such thing was to be extracted from Longo’s deeply disordered mind. He seems almost entirely dissociated from the horrible reality of Longo’s crimes, in the same way that he seems dissociated from the real consequences of his faked magazine article, which did considerable damage to child-welfare activism on the ground in Africa.

Jonah Hill might well be able to play Finkel as a tormented existential antihero, a man who sees some but not all of his tragic flaw (since this also applies to the rest of us), a man who – to use the inescapable Nietzschean cliché – stared long and eagerly into the abyss, knowing exactly what will happen. But this is a movie with the collapsed moral universe of most movies, and while there are snatches of those possibilities in Goold’s script and Hill’s sweaty, indrawn performance, the fictional Finkel we get here has to be more or less heroic. At least he has to learn and grow and find himself in a position of moral rectitude at the end of the story, thanks largely to the guidance of his wife (played by Felicity Jones, who gets one terrific scene with Franco).

There’s enough unfulfilled possibility in “True Story” to make it an intriguing introduction to this story of deception and self-deception, but the balance between true-crime cable soap and the darker, richer layers of Franco’s performance never quite adds up. When Longo purrs, “Did you do it?” it’s like a sexual come-on; the question is less Did you tell a lie? than Aren’t we alike, you and I? and Don’t you want to know how deep the kinship goes? Finkel and Longo are not alike, of course, in that their misdeeds are not remotely comparable. But what they spotted and embraced in each other were advanced symptoms of a widespread modern disorder: We obsess about our own sins, we tell and retell our own stories until we don’t know whether they are true, we do not quite believe other people are real or that we can hurt them.