The Walter Scott outrage nobody is talking about

The killing of an unarmed man has rightly captured our attention. But another aspect of the story remains unnoticed 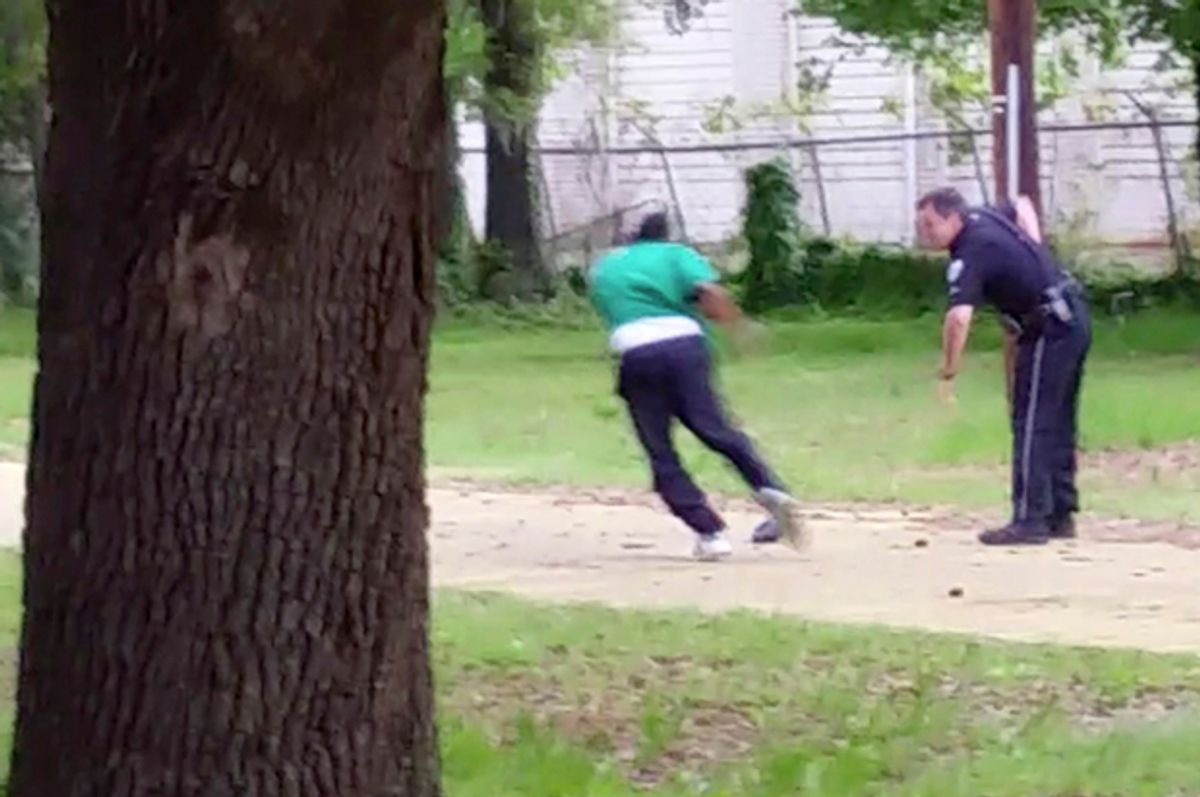 Michael Thomas Slager, right, pulls out his handgun as Walter Scott runs away from him, April 4, 2015, in North Charleston, S.C. (AP/Courtesy of L. Chris Stewart)
--

The horrific story of the unarmed Walter Scott's death at the hands of Officer Michael Slager continues to reverberate. Aside from the incontrovertible evidence on the tape that the accused officer shot him in the back as if he were doing target practice, there has since emerged more tape of the traffic stop itself and audio of the officer speaking with his superiors on the phone raising even more questions about his state of mind at the time of the shooting. But as journalists have gone back and studied the officer's record and found that he was previously investigated for taser abuse. And on even further investigation it was found that this jurisdiction is known as "Taser town":

Until the eight shots heard ’round the world, cops in North Charleston, South Carolina, were primarily distinguished by their zesty use of Tasers.

As computed by a local newspaper in 2006, cops there used Tasers 201 times in an 18-month period, averaging once every 40 hours in one six-month stretch and disproportionately upon African Americans.

The Charleston Post & Courier did the tally after the death of a mentally ill man named Kip Black, who was tasered six times on one occasion and nine times on another. Black died immediately after the second jolting, though the coroner set the cause of death as cocaine-fueled “excited delirium syndrome.”

It's important to note that Taser International has spent large sums convincing local coroners that this syndrome (which primarily seems to kill people in police custody) makes it the victim's responsibility if they have the bad luck to die from being shot full of electricity with a taser. It's not just illegal drugs in the system which can allegedly cause it. Adrenaline can as well. So if a person fails to remain calm in face of an arrest and finds the feeling of 50,000 volts going through their system to be stressful they have no one to blame but themselves if they die.

Those who have been following the story of Walter Scott understand the significance of the taser. It's not just that the officer evidently lied about Scott taking his taser, thus somehow justifying his using lethal force, or the fact that he appears to have tried to plant the taser next to the slain man's body to cover his tracks. The man who filmed the shooting said this:

It's not unusual for people to try to escape from a taser if they can. It is, quite literally, a torture device designed to force compliance with terrible pain. The people of Taser Town, particularly African American men, undoubtedly understand exactly what is going to happen if they find themselves in the custody of a police officer. Here's one example of how it would likely go down, as reported by The Guardian:

Slager is among three patrolmen named in a lawsuit filed by Julius Wilson, who said he was arrested after being stopped in his car in August last year. Wilson is also suing the city of North Charleston, the city police department and police chief Eddie Driggers.

Speaking at a press conference on Monday, Wilson described Slager and his colleagues as “bad, corrupt cops”. He said: “The use of excessive force or punishment to torture suspects is not something that should be tolerated by the North Charleston police department.”[...]

Wilson, who has a criminal record, said he was stopped on 25 August because his vehicle had a broken tail light. Scott, 50, was stopped for the same reason on 5 April before fleeing and being shot dead by Slager.

Wilson was stopped by an Officer Edwards, he said, who was joined 10 minutes later by Slager and an officer Clemens despite Wilson calmly “making small talk and laughing”.

After refusing to step out until he was told why he was being arrested, Wilson claimed, he was forcibly pulled out of his vehicle by Slager and the two other officers. The three then “forcibly restrained Wilson on his stomach on the pavement face down,” the lawsuit stated.

Despite Wilson “not moving, nor resisting” and lying with his hands above his head, the lawsuit claimed, Slager broke a silence among the officers by shouting: “Watch out! I’m going to tase!” He then allegedly “shot his NCPD-issued taser into Wilson’s back”.

The lawsuit alleged Wilson “writhed in pain from the electric shock”. It said when Slager warned his colleagues he was about to fire his taser, “Wilson was cooperating fully” and allowing the two other officers to place his hands behind his back.

Tasers guidelines vary by department and jurisdiction, but generally their use is only considered reasonable when the subject poses a safety threat. Clearly, shooting an unarmed 50-year-old man when he runs from the taser is not one of those cases. The video of the Scott incident shows that Officer Slager is confused on that issue, to say the least. And it's just as clear, based on that same standard, that nobody could ever claim such force is justified when presented with an unarmed suspect facing down on the ground, with his hands behind his back. Using a taser in that situation is simply a form of unofficial street justice, a little torture at the hands of the authorities to make a point. Tasers are not simply used in place of lethal force, and they're not always used to force compliance. They are very often used as on-the-spot punishment by police who want to teach citizens a lesson.

Take the now notorious California incident that happened to be filmed by a local news station, in which  a man on horseback led police on a chase through the desert. When he fell from the horse, police swarmed and he very clearly laid down on his stomach and put his hands behind his back. Then the police beat the hell out of him and tasered him repeatedly. This footage has garnered widespread criticism because of the beating, and for good reason. It's brutal, primitive behavior.

But you won't find many people expressing outrage about the electric shocks being administered to this man over and over again. Here's a typical news report of the incident:

In video captured by cameras aboard a helicopter for KNBC, deputies gather around the man after he falls from a horse he was riding to flee from them. The video shows deputies using a stun gun on him and then repeatedly kicking and hitting him.

KNBC reported that the man -- identified by authorities as Francis Pusok -- appeared to be kicked 17 times, punched 37 times and hit with a baton four times.

Again, if you look at the footage, Pusok was on the ground, face down with his hands behind his back before anyone tasered him or physically assaulted him. And yet the tasering is apparently considered a-ok. At the very least, it isn't mentioned as something that shocks the conscience the way the beating does.Perhaps this is because the searing pain of electro-shock doesn't leave much in the way of a mark. But hideously painful it is. Yet for some reason, delivering this particular agony to a suspect is not something people reject when there is no danger to police or bystanders, and the suspect is compliant. But police do it routinely, and are rarely sanctioned for it.

Some of this undoubtedly stems from the fact that popular culture has turned tasering into slapstick comedy. Movies and TV shows and countless Youtube videos portray it as a hilarious joke. "Don't tase me bro" became as national catch phrase. But it's not funny. Tasers can kill people. And regardless of what level of respect and compliance one thinks police are entitled to get from the public, they are not entitled to torture and punish citizens to teach them a lesson.

Walter Scott ran from the pain of the taser and he was shot in the back numerous times for doing it. Francis Pusok was compliant and was tasered and beaten repeatedly anyway. It appears that such shootings and beatings, when captured on film anyway, are still considered beyond the pale in America these days. In both cases, officers will have to face some sanction for their behavior. Slager is facing a murder charge. It's unknown what the California cops will face, but the FBI is investigating, so there may be some federal civil rights charges. It will be very interesting if any of the officers are charged with assault for using the taser. Let's just say it will be among the vast minority of cases ever brought if they are.