Wall Street's favorite myth just got busted: The rise of "shadow banking" and the fall of GE Capital

Thanks to Washington, big banks are getting sneakier — but G.E. just proved it doesn't have to be that way 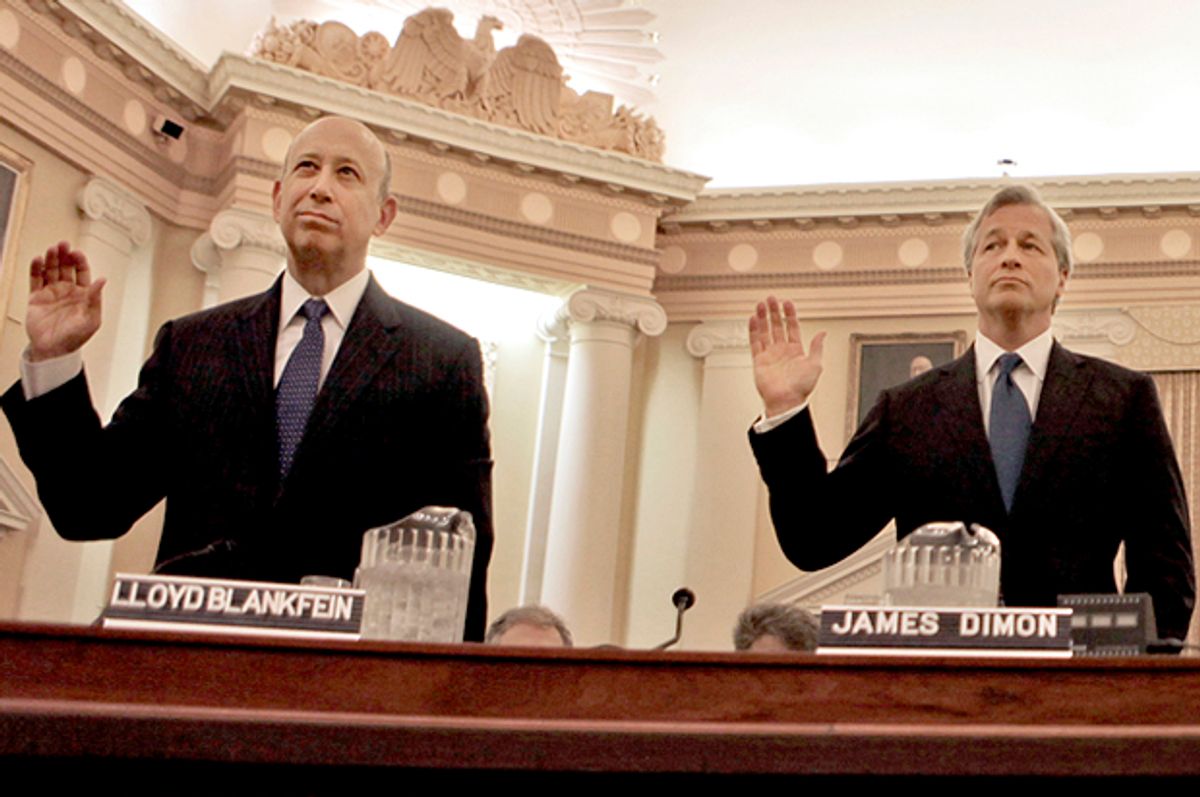 Lloyd Blankfein and Jamie Dimon are sworn in on Capitol Hill, Jan. 13, 2010, prior to testifying before the Financial Crisis Inquiry Commission (AP/Pablo Martinez Monsivais)
--

The Dodd-Frank Act is a sprawling work of hundreds of provisions encompassing the entire financial sector. Singling out one development and insisting it shows Dodd-Frank “working” is an act of either tremendous partisanship or misinformation. In reality, it’s a testament to how big the financial system is – too big, in fact – that you can build as compelling a roster of evidence about Dodd-Frank successes as you can about its failures.

That said, the decision by General Electric to sell off its financial unit, GE Capital, is important, though not for the reasons many have been giving. General Electric focusing on manufacturing instead of lending represents one of the few retreats for creeping financialization – the transformation of every corporation into a banking and trading concern – in recent decades. More importantly, the positive market reaction to GE’s decision shows that Dodd-Frank, if anything, didn’t go far enough. If you can break up GE Capital without systemic disruption or loss of global competitiveness, you can break up the banks, too.

First, let’s inject some perspective: GE Capital is close to a sui generis case, an arm of an industrial company immersed in finance. Over time, GE Capital’s lending book swelled to hundreds of billions of dollars; it was even a subprime lender, through WMC Mortgage. Since the bankruptcy of GMAC, the finance arm of General Motors, there aren’t really any corporations with a similar profile.

In announcing the breakup of GE Capital, GE CEO Jeffrey Immelt specifically cited the company's designation as a systemically important financial institution, or SIFI. Under Dodd-Frank, SIFIs are subject to higher capital and other regulatory requirements, through the “super-regulator,” the Financial Stability Oversight Council (FSOC). GE was labeled a SIFI in 2013, and the compliance costs and capital needs can drag on profits.

Financial reform advocates and Obama Administration defenders leaped to praise this as a victory for Dodd-Frank. “GE’s decision shows that some of the financial reform measures regulators have taken are working,” said Dennis Kelleher of the reform group Better Markets. “The much maligned Dodd-Frank financial reform is doing some real good,” added Paul Krugman, who specifically noted how the SIFI designation cracks down on “shadow banking,” non-banks exploiting a lack of regulatory oversight to engage in risky practices.

But it’s not like GE’s lending business has been eliminated; in fact, much of it just moved into less-regulated corners. Most of the first $26.5 billion sale of GE Capital’s commercial real estate holdings went to the Blackstone Group, a private equity firm not likely to be designated a SIFI. Wells Fargo bought the rest, an example of their gradual push into riskier areas of banking. Wells already has regulatory compliance structures, so absorbing a bigger balance sheet doesn’t make much difference. But it’s hardly a universally good outcome of GE Capital disappearing -- a too-big-to-fail bank has gotten bigger and more complex.

The shadow-banking system, what Krugman says the GE Capital deal shows is in its last throes, is actually near a pre-crisis peak. The Financial Stability Board estimates that shadow banks hold over $75 trillion (with a T) in assets as of 2013 in the most developed countries – around 120 percent of the region’s gross domestic product, and rising. U.S. shadow banks hold three times as many assets as any other country.

Recent changes to Dodd-Frank will actually increase shadow banking. In last year’s so-called “CRomnibus” deal, President Obama signed the “Insurance Capital Standards Clarification Act of 2014,” protecting large insurance companies from stringent capital and other regulatory requirements. Krugman could just read his own paper to understand how once-sleepy life insurers have been getting into lending and increasing risk.

That’s not to say that the breakup of GE Capital is meaningless. In one respect it’s great news. “The future for GE is as an industrial company,” CEO Immelt said Friday. Good. Manufacturers should focus on manufacturing, a rarity in recent years. The rise of “financialization,” where corporations engage in financially engineering short-term profits rather than actually making things people want, has hit workers hard. Thomas Palley of the Levy Economics Institute argues that financialization has helped cause wages to disconnect from productivity growth. The money gets disgorged away from the people who produce the goods and into the hands of shareholders, instead of back into the firm.

Admittedly, GE’s decision was accompanied with some extreme financialization – a vow to buy back $50 billion in stock, a cash leak to shareholders. But doing this will force them to reduce a separate type of financial engineering, by bringing back $36 billion in profits from overseas and paying $6 billion in taxes on the earnings. This looks to be part of an emerging trend by multinationals to stop hoarding cash. To the extent any of that money goes into actual physical investment to grow the business – Immelt is promising up to $5 billion a year – it’s the first real step backward for financialization in a long time.

Importantly, investors wanted this shift, and rewarded GE for making it. The stock jumped 11 percent on Friday, and even with some profit-taking on Monday, shares are well above where they were before the GE Capital announcement.

We’ve heard constantly since the financial crisis that big banks could not be broken up, because America would lose its global status as a financial center, or because sophisticated corporations needed big banks to help them acquire capital. The GE Capital announcement dismantles that talking point. A SIFI voluntarily unwinds itself, and Mr. Market loves it.

That’s because they know GE Capital is worth more in parts than as a whole unit. GE spun off its retail finance arm as Synchrony Financial last year for $19 billion and it’s now worth over 30 percent more. This also holds for big banks: Goldman Sachs found in a report last year that JPMorgan would be worth much more if it broke itself up, and other mega-banks are in a similar position.

Like GE Capital, splitting JPMorgan or Bank of America into smaller pieces wouldn’t eliminate systemic risk as much as it would move it around. But it would change the equation on political economy. Big banks acquire power along with their size, enabling them to rewrite laws like, well, Dodd-Frank. A more fragmented financial system with smaller banks could lessen that pressure. And it would allow regulators to focus on severing connections between smaller banks and the commercial sector, or one another. In other words: Take too-big-to-fail out of the equation, and you free up regulators to focus on shrinking the whole system. Unlike GE Capital, big banks won’t do this voluntarily; their SIFI status is endemic to their existence. So the government should make the decision for them.

If the GE Capital breakup really did depress shadow banking, it would be reason to celebrate. Unfortunately, while SIFI designation can be successful at unmasking big shadow banks, it doesn’t take all of them out of the shadows. The best way to expand that regulatory perimeter is to get the real financial behemoths off the playing field first. And as GE Capital shows the JPMorgans of the world, breaking up isn’t hard to do.