A "free range" family fights back: "The police coerced our children into the back of a patrol car"

Danielle and Alexander Meitiv say CPS has gone too far 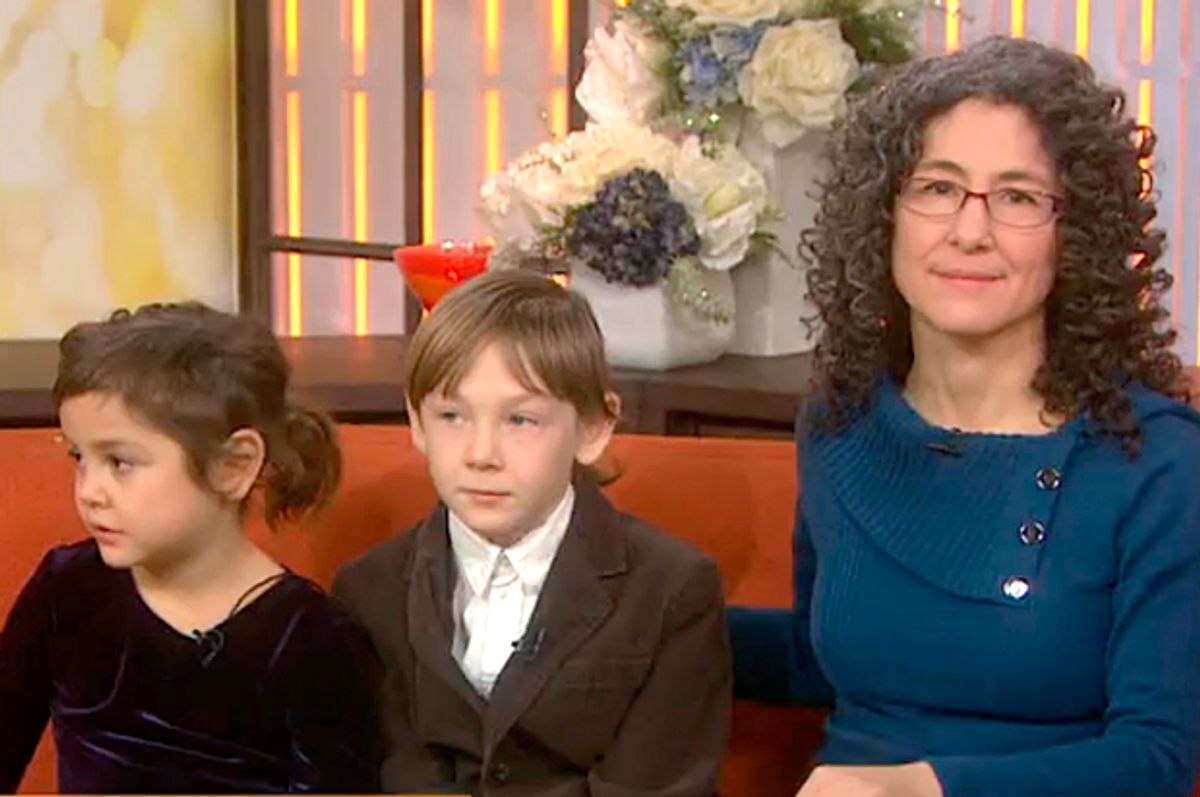 Danielle Meitiv, with her children Dvora and Rafi (Today Show)
--

Maryland parents Danielle and Alexander Meitiv say they're afraid of their children being snatched away from them. They are not, however, concerned about the ominous threat of stranger danger. They say they're worried about local authorities. And they say they're pursuing "all legal remedies" to protect themselves and their kids.

This is just the latest twist in a story that began in January when the Meitiv children — Rafi, 10, and Dvora, 6 — were the center of a neglect investigation after their parents let them walk a mile home unaccompanied from a playground. Danielle Meitiv, a self-identified "free range" parent, later told CNN that halfway back, the children were stopped by the police, who asked if they were lost. They said no, but the police brought them home, and later that day Child Protective Services came to the house to tell the parents the kids could not be out unsupervised. Yet as CNN points out, there is no Maryland law limiting how old a child can be out alone. "This is no joke," Danielle Meitiv said. "The threat that they can take my kids is real."

Then this week, the family found itself back in the spotlight, after Danielle posted on Facebook Monday that they'd had another run-in with authorities. She claims they'd sent the kids to the park again and told them to return in two hours. Instead, she said, "The police coerced our children into the back of a patrol car, telling them they would drive them home. They kept the kids trapped there for three hours, without notifying us, before dropping them at the Crisis Center, and holding them there without dinner for another two and a half hours. We finally got home at 11pm and the kids slept in our room because we were all exhausted and terrified." Montgomery County Police, meanwhile, claim they received a call to check on the children, and that when they arrived, the children were in a parking garage and that "The officer observed a homeless subject who he was familiar with, eyeing the children." Just a reminder — stranger danger is a very small threat. Up to 90% of child sex offenders know their victims, and half of them are relatives. Also, the homeless are permitted to look in the direction of children. Danielle says that CPS has now made them sign a "safety plan" that they "will not leave their kids unattended at all until CPS follows up."

But now the parents have lawyered up. In a statement Tuesday, Matthew Dowd of the the firm Wiley Rein said that the Meitivs are "rightfully outraged by the irresponsible action" of Maryland Child Protective Services and Montgomery County police, and added, “We must ask ourselves how we reached the point where a parent’s biggest fear is that government officials will literally seize our children off the streets as they walk in our neighborhoods." And the Meitivs allege that the police did not contact them or permit their children to do so.

The Meitivs have the energy and inclination — and now a platform — to push back on their investigation. But the great problem with overzealous protective intervention is that it more often targets low income families, who are subjected to unreasonable penalties. Last summer, South Carolina mother Debra Harrell was arrested when she let her 9 year-old daughter play in the park while she went to her job at McDonald's. She had to pay $4,000 to bond out. Soon after, Florida mother Nicole Gainey was arrested for letting her 7 year-old walk alone to a local park.

Given their experience just earlier this year, were the Meitivs playing a dangerous game of chicken with authorities by allowing their children to play unsupervised? Perhaps. Are their children mature enough to be outside on their own, or are they likely to wander off into unsafe situations, including heavy traffic? That's a difficult call, and certainly one no parent would want to be on wrong side of. But it should be very clear that excessive and aggressive actions on the part of authorities are not at all what local CPS cluelessly calls "in the best interest of all children." It should be clear that if children can articulate where they live and how to reach their parents, they are not lost and in need of assistance. But what's at the heart of the issue isn't just how young is too young to be outside in the world — because eventually, every child is going to take that walk to school alone, to get on the subway by himself. It's about how to keep kids safe while teaching them to be competent individuals. It's about assessing risk. And about whether "a parent's biggest fear" should be a stranger or CPS.