From Sally Draper to Arya Stark: 5 TV dramas that bet big on kid actors and won

Child actors can turn into nightmare adults, but choosing wisely in early casting can change the course of a show 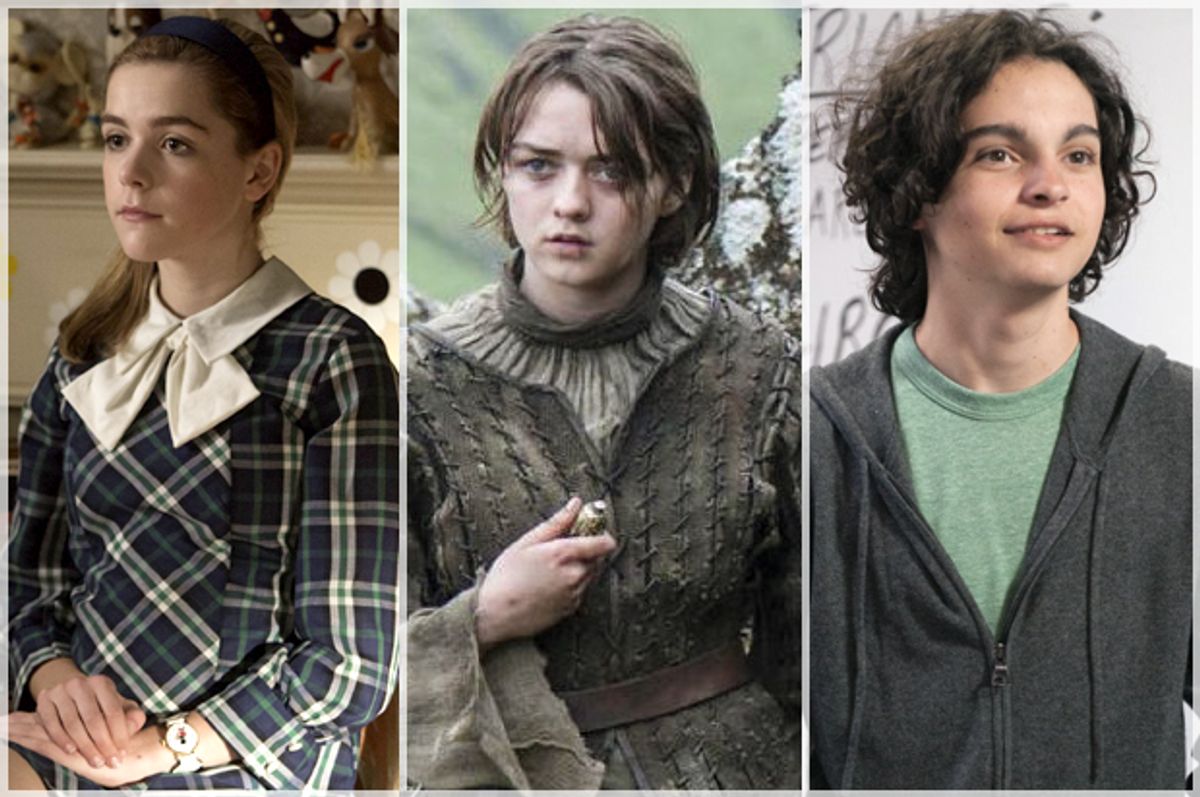 Casting a kid actor is always a gamble. It's tough to know what a fresh-faced six year old might look like or sound like in a few years, and whether a child's ability to memorize lines without stammering will transition into an ability to shoulder intense dramatic material down the line. But on the rare occasion that gamble pays off, it can be magical. Long-running serialized shows have a certain "Boyhood"-esque -- or perhaps even more often, "Girlhood"-esque -- quality to them, wherein we get to see a young actor or actress blossom and evolve before our eyes, often becoming the heart and soul of the shows that surround them. Here's five examples of kid casting at its finest:

When the show began, Sansa and Arya Stark (played by 13-year-old Sophie Turner and 12-year-old novice Maisie Williams) were mostly overshadowed by the older members of the Stark clan: Their parents Ned and Catelyn, and their strapping older brothers Robb and Jon Snow (oh and Theon, sorta). Now, with much of the Stark clan beheaded/Red Weddinged/"Reek"ed out of the picture, Sansa and Arya are emerging as two of the most key players in Westeros -- and two of the show's most beloved characters.

While we don't know how things are going to shake out, one has the distinct feeling these two young ladies will be pivotal in shaping the kingdom’s fate. As the New York Times writes, “The new season finds the Stark girls transforming into drivers of the action, joining a coterie of female “Thrones” characters coming to power.” As with anyone on "GoT", the young actresses are forced to grapple with brutal material, from Arya learning how to defend herself to Sansa’s near-constant abuse (per Turner, this season she has a scene coming that is "super traumatic"). In the hands of two lesser actresses, the show wouldn't be what it is today.

Few shows rely as heavily on their kid actors as "Shameless," which follows the six Gallagher kids as they are forced to fend for themselves in a world wracked with poverty and dysfunction. As the years have gone on, the kids have had to shoulder increasingly dark and difficult storylines, from Emma Kenney's Debbie trying to get pregnant at age 14 (which our own Sonia Saraiya explored recently) to Ethan Cutkosky brilliantly navigating Carl's psychopathic tendencies and blossoming sexuality. In an interview with the Chicago Tribune, EP Mark Mylod talked about how Carl's role on the show grew as Ethan's talent became evident. "When you look at Season 1, the role of Carl was to occasionally say something slightly shocking, but we certainly would never dream of actually putting any kind of narrative on him or giving him any kind of story strand," he said. But as they "needed Ethan's character to pull a lot more dramatic weight... [he] stepped up to the plate wonderfully and continues to impress us all both as a young man and as an actor."

"It’s exciting to watch them take hold of their characters in different ways," added Emmy Rossum, who plays the oldest sister Fiona Gallagher, in an interview with Entertainment Weekly. "Ethan, who plays Carl, he’s very instinctual, there’s really no method to his madness. Emma, she’s like me, she’s very type-A, she has notes written in every margin, so it’s interesting to watch them develop into the artists that they’re going to be."

"The Americans" is another instance where, after proving herself capable, a child actress gradually moved from the show’s periphery to its center. Surprisingly, the show is better for it; as HitFix's Alan Sepinwall wrote, "No good usually comes from focusing on the teenage kids of cable drama anti-heroes and heroines..."The Americans” actually got better in its second season by concentrating more on Paige." Come season three, young Paige Jennings is at the very heart of the action, as we see her grappling with the truth about her parents' secret lives as spies, and possibly even being groomed to follow in their footsteps. Paige is fully her own woman with her own sense of motivations and desires, but she's also a prism through which her parents' existential struggle is reflected. Only an actress as gifted as 17-year-old Holly Taylor could pull off the sort of emotional heavy-lifting this part demands.

I interviewed Taylor recently, and it's clear that the young actress' sweet, thoughtful personality informed the direction of the character. "If you were to imagine the epitome of the precocious awful child star, she is the absolute antithesis of it,” Matthew Rhys, who plays her father Phillip, tells WSJ's Speakeasy. “She is the sweetest, humblest, loveliest girl I’ve ever come across. And that lends itself to her acting. She’s got a great truth about her. She’s incredibly sincere, and I think that serves her well, especially in the story line of having this very simple but incredibly strong belief. It lends itself to the way she’s handling this story line incredibly well.”

One of the greatest delights of “Mad Men” has been watching Sally Draper grow up before our eyes. Kiernan Shipka was just six years old when she was cast on the show, and early on, her presence was relegated to brief cameos (her first appearance was getting scolded by Betty for wearing a drycleaning bag on her head). Now, a beautiful and self-posessed 15-year old, Sally Draper has become one of the show's most important characters (perhaps even the most important character, as Scott Eric Kaufman argues over at Vox).

Over the show's seven seasons, Weiner has given Sally increasingly complex material to grapple with, from her teenage rebellion at boarding school to walking in on her father cheating with his neighbor, all of which she has handled with aplomb. As showrunner Matthew Weiner recently put it in the New York Times, "I had no right to hope she’d turn out this beautiful. But you never know how a 6-year-old is going to develop. Will they become self-conscious in front of the camera or lose interest? But Kiernan is a prodigy.”

Showrunner Jason Katims has said that he was initially so terrified about casting Max Braverman, an 8-year-old with Asperger's syndrome, that he wrote two outlines for the show: One that included Max and one without him. "It was difficult enough to find a child actor who was able to be natural and comfortable in his own skin," explained Katims, who also has a child with Asperger’s, in THR. "But to ask a then-11-year-old boy to be able to accurately portray a disorder that is so difficult for highly educated adults to understand seemed almost impossible.”

So Katims seriously lucked out with 13-year-old Max Burkholder, who brought an unexpected level of sensitivity and understanding to the part, as well as a nuanced physicality that came from researching the disorder extensively and even getting involved with autism activism outside the show. As the show has gone on, Katims gave Burkholder increasingly more to do ("Max so locked in to the character, I felt inspired to push his stories even further," Katims says) from dealing with his mother’s cancer to developing his first crush. As Katims told Buzzfeed, "Max gave me the confidence to know I didn’t have to shy away from any story.”