Marco Rubio's cynical Tupac fandom: Why “I don’t listen to music for the politics” is a hip-hop cop-out 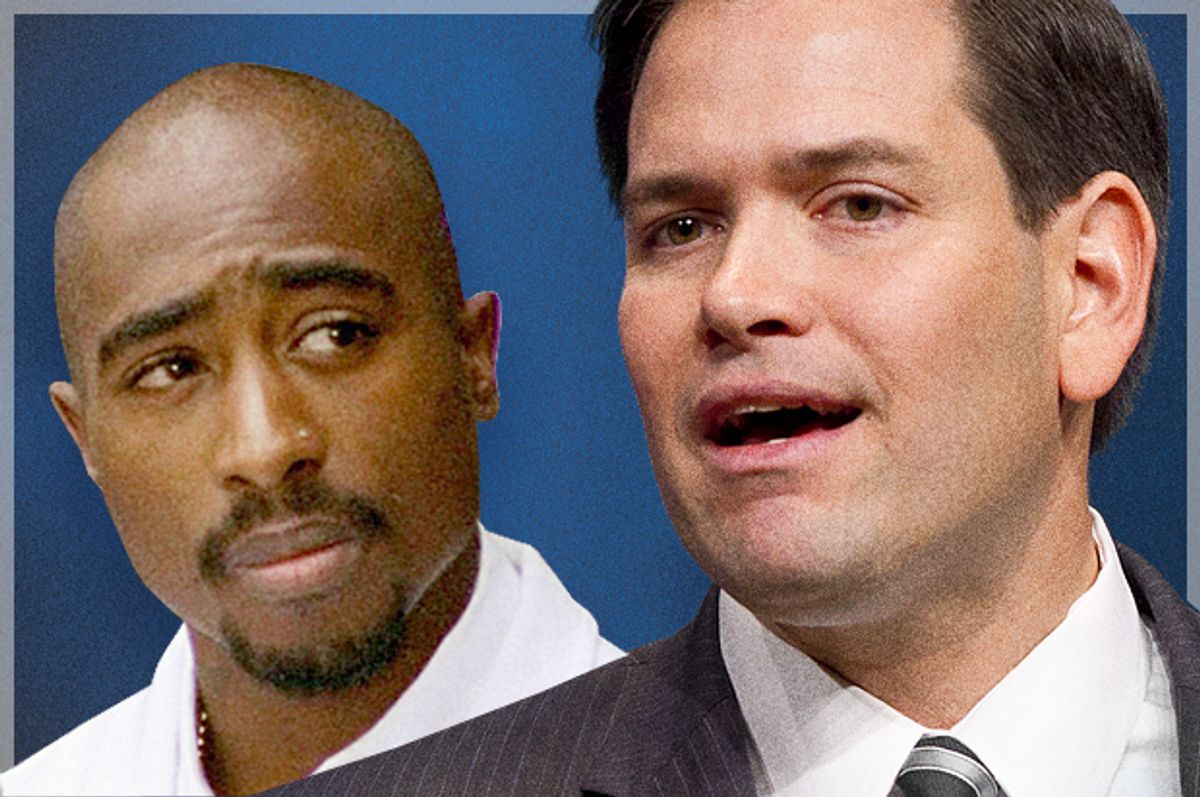 Senior advisers to presidential hopeful Sen. Marco Rubio are betting on the candidate’s fluency in youth pop culture as his comparative advantage against the elder titans, Gov. Jeb Bush and former Secretary of State Hillary Clinton, reports BuzzFeed’s McKay Coppins. Chief among Rubio’s young and hip bona fides is his love for late rapper 2Pac, say advisers. Rubio “cherishes” his 2Pac albums, and the senator is proudly able to knowledgeably defend 2Pac in a Biggie vs. Pac debate, one of the long-standing debates in hip-hop.

Oh word, Marco? You like Pac too? Didn’t think we had anything in common. What is it about 2Pac’s life and art that you’re most into?

Is it his participation in Black Panther radicalism, the revolutionary milieu into which he was born and apart from which his music and life cannot be understood? Tupac was the son of a Black Panther and lived his life among black radicals and revolutionaries. His mother Afeni Shakur was a member of the infamous Panther 21, accused (but acquitted) in 1969 of planning a bombing campaign in New York. His godmother is Assata Shakur, who remains in asylum in Cuba, under the protection of the Castro regime, because she is hunted by the U.S. government as the first woman ever placed on the FBI’s Most Wanted Terrorists list.

Pac’s godfather was high-ranking Black Panther Geronimo Pratt, who did 27 years for murder while with the Panthers. Tupac’s stepfather was Mutulu Shakur, a black revolutionary who spent five years underground before being arrested in 1986 on charges of “conspiracy and participation in a clandestine paramilitary unit” when Shakur and members of the Weather Underground held up a Brinks bank truck, an attack that resulted in the deaths of two police officers. (Now that’s palling around with Bill Ayers.)

A young Tupac even became chairman of the New Afrikan Panthers, a neo-Black Panther group.

A real fan of 2Pac, like Rubio, would recognize these names from the rapper’s first album, when on “Words of Wisdom” he associated his goals in the rap game with those of the black revolutionaries:

The shout out to these enemies of the state directly follows a sort of mission statement or manifesto from Pac:

NIGHTMARE! That's what I am
America's Nightmare
I am what you made me
The hate and the evil that you gave me
I shine as a reminder of what you've done to my people
For four hundred plus years
You should be scared
You should be running
You should be trying to silence me
Ha, but you can not escape fate
Well, it is my turn to come
Just as you rose you will fall
By my hands
America, you reap what you sow.

But Rubio would know all of this, right? Since he’s such a fan and points out how “Tupac was more someone who was trying to inform us about what was going on” and “gave us insight into a time in our country and really gave a voice to a people in America at that time who were facing different struggles.”

Rubio, being both a Pac fan and a Republican, would surely know of the public beef between 2Pac and Vice President Dan Quayle, when Pac rapped, “Boom bam boom!! It's a stick up / Vice president Dan Quayle, eat a dick up!” I wonder which side a young Marco chose.

Surely Rubio is a fan of 2Pac’s biggest hit, the posthumously released “Changes.” The first verse of the song posits that '80s-era conservatives, with President Reagan at the center, shipped cocaine and guns into the hood to, as he rapped on “Words of Wisdom,” “eliminate the problem” of “troublesome black youth of the ghetto”:

"Give the crack to the kids; who the hell cares?
One less hungry mouth on the welfare!"
First ship 'em dope and let 'em deal to brothers
Give 'em guns, step back, watch 'em kill each other.

The theory is returned to in the third verse in a tight, two-line denunciation of the Reagan turn from a Johnson-era “Great Society” ethos to one of austerity and mass incarceration: "Instead of war on poverty / They got a war on drugs so the police can bother me."

Rubio tries to hedge by saying, “I don’t listen to music for the politics of it,” despite explaining how rappers like 2Pac “were like reporters ... reporting about what life was like.” In other words, you’ve been told how it is, but you didn’t listen. Which seems worse than never having been informed.

2Pac would likely despise what Rubio is doing, appropriating black cultural expression and stripping it of its inherent socio-political dimension in order to gain power in the Republican Party. The cultural crime of appropriation is much discussed in the hip-hop world right now, with stars like Iggy Azalea essentially wearing black and hip-hop culture like an outfit that she hops out of as soon as Ferguson erupts and blackness isn’t fun anymore, but one imagines that 2Pac might see Rubio’s appropriative move as vastly worse than entertainers borrowing black culture for a paycheck. Rubio is enlisting 2Pac in absentia in order to gain the power to enact policies Pac would’ve found abhorrent.

Republicans, especially in their late turn toward Tea Party extremism, don’t seem to understand that pop music is very often populist music, even radical, and that it very often emerges in response to them, to the rightward movement of the country. Take New Jersey governor (and possible presidential candidate) Chris Christie, who is somehow able to square his love of Bruce Springsteen — an artist whose most popular work was born out of the rejection of conservatism, post-industrial late capitalism, and Reagan’s '80s — with his own life as a leading Republican figure. Christie, normally pugnacious, is even a little pitiful in his hope that The Boss would be friends with him. Or former vice presidential candidate Paul Ryan, who suffered a seething rebuke from Rage Against the Machine’s Tom Morello after it became known that the band was Ryan’s favorite. “Paul Ryan is the embodiment of the machine our music rages against,” the guitarist wrote in Rolling Stone. Ouch.

Sorry, guys, but some of the best music of the past 40 years is made by people who just don’t like what you stand for — like pretty much the entirety of hip-hop. Y’all get super PACs, y’all get power, y’all get to spin around the lucrative revolving door of Congress-industry-Congress-lobbying-etc., but we get hip-hop. We get Bruce Springsteen. We get Rage Against the Machine.