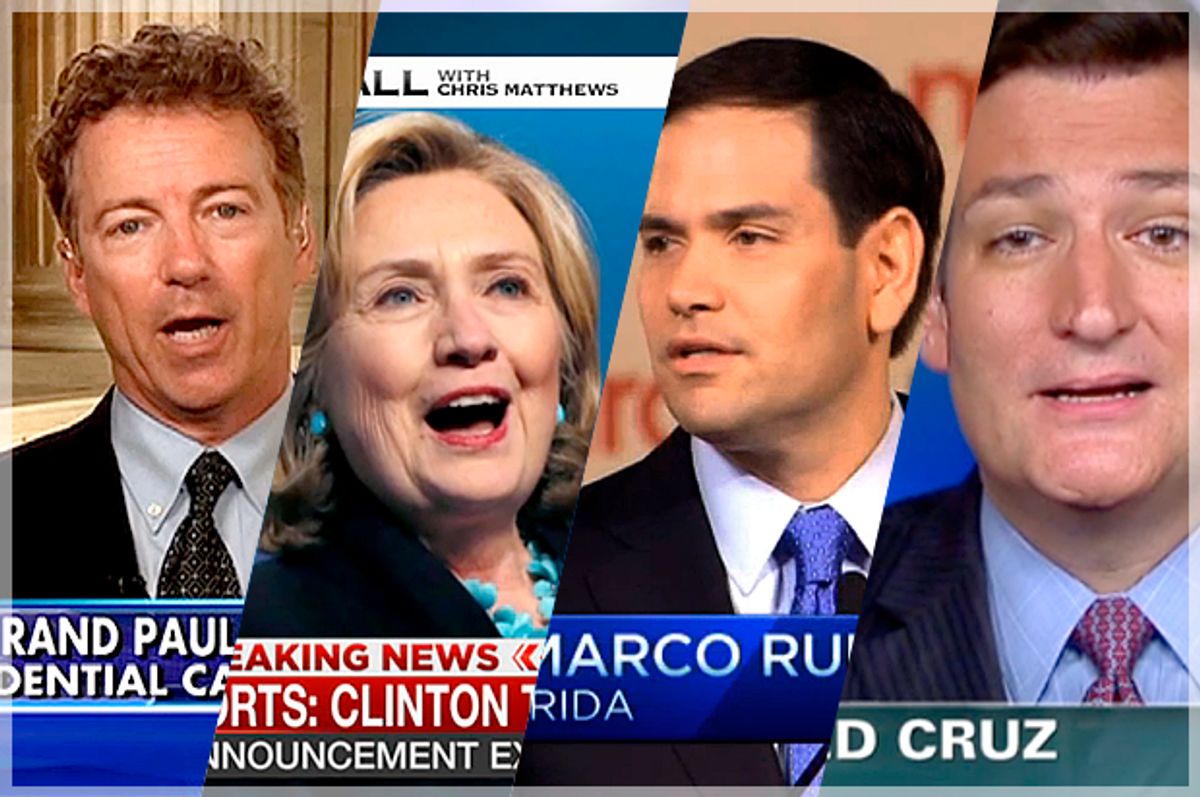 One way to know that a presidential campaign has begun in earnest is when the political press starts obsessing over what politicians are eating. It's not obvious why this subject holds such fascination for them (it almost certainly isn't interesting to the public), but it seems to be one of many proxies used by the boys and girls on the campaign trail to determine whether a candidate is Real or Phony.

I'm sure most people will recall the huge controversy in the 2004 campaign over John Kerry foolishly ordering his Philly Cheesesteak with Swiss cheese (like the Frenchman he obviously was) instead of having it with Cheese Whiz the way a real patriot would. (He was also found guilty of the crime of drinking green tea, which was seen by some as a near admission of his intention of giving up his U.S. citizenship and emigrating to China.) Yesterday we learned that Hillary Clinton is a Phony because she went into a Chipotle and didn't glad-hand everyone in the place and ordered a chicken bowl instead of a Real American all-beef Super Burrito with extra everything.  Of course, if she had ordered that and stopped to shake everyone's hand she undoubtedly would have been taken to task for eating beef in a pork-producing state and calculatingly using her lunch as an excuse to campaign. This is not a game you can win unless you are Bill Clinton and are happy to eat junk food day and night, thus proving your All American bona fides one clogged artery at a time.

This nonsensical attention to trivia is what drives campaign coverage, and one clue as to why that is can be found in this article in last weekend's Washington Post style section:

With the presidential campaign just getting started, the race for the White House figures to be the most covered, and perhaps the most over-covered, story of 2015. Major news organizations have all but made that official by engaging in an arms race of sorts to hire more political journalists. The staffing binge comes as many in the news media are cutting back in other areas.

Perhaps the most ostentatious hire of the cycle is Bloomberg Media nabbing the king of conventional wisdom Mark Halperin and his sometime writing partner John Heilemann for a reported cool million each several months ago. They have been campaign reporting darlings ever since they published their 2008 book "Game Change" known for the HBO movie featuring Julianne Moore and the vicious, back-biting gossip obsessively directed at Hillary Clinton, Sarah Palin and the wives of other candidates, from Cindy McCain to Elizabeth Edwards. (The latter portrayal will go down in history as one of the most gratuitously cruel portraits of a dying woman ever put on the page.)

Their start at Bloomberg was inauspicious, to say the least, when they apparently decided their true calling was as comedians in the vein of Jon Stewart and Stephen Colbert. They launched a painfully unfunny Web series called "With All Due Respect," which Politico media critic Dylan Byers compared to the notoriously disastrous late-night talk show hosted by Chevy Chase back in the '90s. (For those of you who are too young to remember, that is a dis of epic proportions.) He described it this way:

Mark Halperin and John Heilemann — two men who, if morphed together, would bear an uncanny resemblance to Chase — tried everything for Monday's premiere of "With All Due Respect," their new show for Bloomberg TV, and ended up desperately adrift. They tasted four different kinds of chocolate ice cream with House Minority Leader Nancy Pelosi; they talked about "Downton Abbey" with former (and maybe future?) presidential candidate Mitt Romney; and they interrupted a harried lightning round of familiar political commentary to eat Cracker Jacks and talk about baseball.

It has not improved, which most of you would know if you'd ever heard of it. But as Byers noted in passing at the time, the million dollar men weren't just hired for their brilliant comedy stylings. They were also hired to do a little political reporting as well. That too didn't go all that well as Heilemann and Halperin barely wrote a word for six months. This was rumored to have been because of Heilemann's potty mouth and the fact that they had used anonymous sources for quotes, which is a Bloomberg no-no. Considering how much of Halperin and Heilemann's oeuvre consists of anonymous back-stabbing quotes (and anonymous back-stabbing paraphrasing), it's hard to imagine what kind of "reporting" they're going to do without it.

But not to worry, as the Washington Post Style section assures us they're rested and ready for some first-rate insider scuttlebutt:

Heilemann said the presidential campaign “will be the biggest story of any kind in America” over the next two years. He suggested that Bloomberg — never a major player in the niche — felt compelled to reinforce its coverage. In addition to supervising text, broadcast and digital-video reporting, Heilemann and Halperin are the hosts of a nightly political show, “With All Due Respect,” that is carried on Bloomberg’s TV network and streamed over its Web site.

To stand out in an increasingly crowded field, Heilemann said his group is seeking to integrate television, digital text and digital video reporting. The editorial mantra, he said, is to be nonpartisan and “not dumbed down.” The idea is to offer a sophisticated take on events, not just “inside baseball” fare for political junkies. “I don’t mean to sound grandiose, but I don’t believe anyone else is doing, or attempting to do, what we’re doing,” he said.

No, nothing grandiose about that. If you're curious about the "not dumbed down" coverage so far, here's a little taste of their "definitive scouting report" on Hillary Clinton:

What she’s got: A gold-plated resume; policy expertise (foreign and domestic); a deep and wide fundraising base; staunch support among every key Democratic nominating constituency; no viable intra-party challenger (as of now); a strong, battle-tested staff; skin as thick as a rhino’s hide (about most things); unrivaled understanding of the hyper-partisan media freak show; historic nature of her candidacy; nostalgia for the Roaring Nineties; her husband.

What she lacks: A clear rationale for her candidacy; a compelling or even discernible message; evident skills at managing a winning campaign operation; natural gifts as a political performer; the consistent ability to free herself from the constant miasma of chaos and psycho/melodrama that have swirled around her for decades; the ready capacity to represent the future rather than the past.

So, she's got a top résumé, enough money, no challenger, a competent staff and a good husband among a few other things going for her. On the other hand, she's an incompetent, talentless, aging, shrieking harpy with no reason to run. Oh, and she hasn't mastered the magical ability to make Heilemann and Halperin disappear in a puff of smoke. How foolishly inept of her.

After reading "Game Change," it's unlikely any woman in public life could ever expect to be treated with even the slightest respect from these two campaign reporters. But that's just one aspect of the problem. These are the people who write "the narrative" that everyone in the Beltway follows as if it's been ordained by God. And more often than not, it's nothing more than shallow, nasty insider gossip dressed up as analysis that they hilariously believe is "sophisticated" and unique. In fact, they are actually the heirs to the great tradition of Walter Winchell and Hedda Hopper, gossip columnists who had the integrity to admit what they were.

Unfortunately, Halperin and Heilemann, with their celebrity and million-dollar paychecks, are the natural role models for every young reporter on the trail these days. All you have to do is watch any cable news panel or read any campaign dispatch to see that their cynical, mean-spirited style is very much in vogue for 2016.