The Boston Marathon and Reddit: When the Internet's deluded amateur-hour detectives ran amok 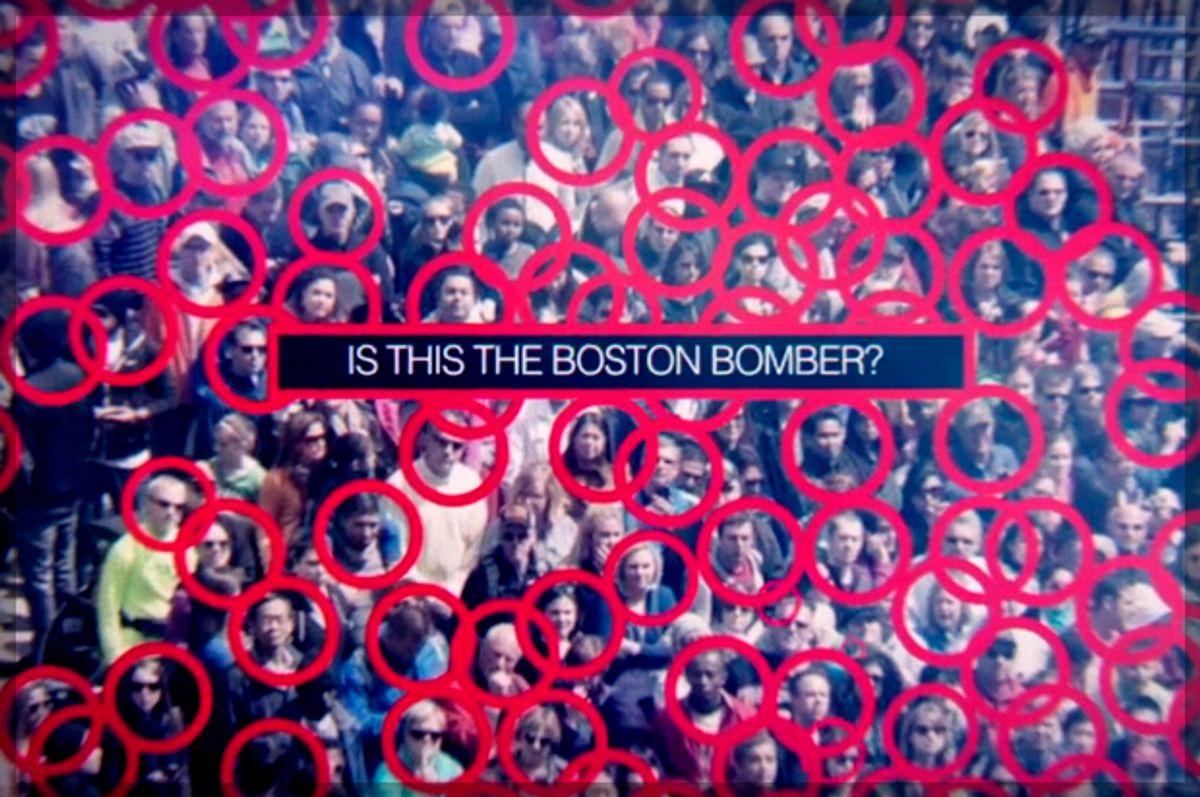 Still from "The Thread" (Lightbox Entertainment)
--

A scene in the new documentary "The Thread" shows Kevin Cheetham, who was a gawky college freshman when he witnessed the Boston Marathon bombing two years ago, driving through suburban streets by night. "I came over this bridge into Cambridge to see what I could see," he explains, his voice slipping into an incantatory lilt, "because the police scanner said everything was going down this way. This is where it all began, the manhunt to find the brothers. They went down that road and I followed them. I wanted answers and no one had them, so I wanted to get them myself."

At first glance "The Thread" is a tale of journalism in flux, and of a tragedy whose aftermath illustrates the perils of the shift from old-media outlets like the New York Times to new-media entities like BuzzFeed and Reddit. In addition to the horror and confusion of the bombing, that evening offered the spectacle of Reddit inflating with hubris to the size of a demonic Stay-Puft Marshmallow Man -- then popping, leaving everything in its vicinity coated with a gooey blend of shame, bigotry and delusion.

Reddit, a digital clearinghouse for user-posted information ranging from cat memes to links to professionally produced news stories to briefs from eyewitnesses, began by providing a needed service. Among other things, users figured out that by accessing a list of finish times for the marathon's runners they could judge where individual participants were when the blast occurred -- invaluable data for those with friends and relatives in the race. Redditors were able to post and collectively evaluate often-conflicting news reports about casualties, suspects and other details of the crime. Anthony Reed, a sociology grad student in Baton Rouge, Louisiana, served as the moderator for this discussion and in "The Thread" presents the most levelheaded, articulate case for Reddit as a powerful method for delivering information in the midst of chaos.

The thread referred to in the film's title, however, is another one: the notorious FindBostonBombers subreddit, a conversation that rapidly devolved into a farrago of unfounded speculation, amateur detection, crackpotiana and conspiracy theory. The visual emblems of this descent into fantasy were a dozen or so crowd photos submitted by individuals and the press, over which redditors scrawled a crazy rash of circles and arrows in glaring primary colors to indicate which bystanders they suspected and why. Not surprisingly, a preponderance of those singled out had brown skin.

Things got worse from there. Reddit theories infected Twitter, which communicated them to professional news outlets like the New York Post and BuzzFeed. Innocent spectators were targeted by a scary cadre of online vigilantes and two blameless men saw their images plastered over the Post's front page with the news that the feds were looking for them (not true). When the FBI released photos of the actual suspects, the Tsarnaev brothers, an unchastened Reddit promptly seized on the resemblance between one suspect (Dzhokhar) and a Brown University student, Sunil Tripathi, who had been missing for several weeks. Someone on Twitter claimed he'd heard Tripathi's name on the Boston police scanner, and the story, apparently verified, spread, causing Tripathi's family great pain. (The student's body was later found in the Providence River.)

Eventually, Reddit deleted FindBostonBombers and apologized to everyone wrongly fingered in their misbegotten "investigation." Plenty of observers blamed the Internet. But in this story, as "The Thread" illustrates, the line between citizen journalists and the old-school kind doesn't correspond all that closely to the one dividing the feckless from the helpful. After all, plenty of professional outlets, like the Post and CNN, did poor, inflammatory reporting in a frantic quest for scoops. And a few of the online amateurs, like Reed, inspire confidence. When the redditors failed, it was less a result of where they did journalism, but how they did it, and above all, why.

The filmmakers have a deft hand -- a novelist's hand, really -- at using details to sketch character. The two Reddit moderators who figure prominently in the narrative, Reed and FindBostonBombers moderator Chris Ryves, are introduced amid quick cuts to the ephemera of their daily lives: a Grateful Dead poster, back issues of National Geographic, video game controllers, belongings heaped around a drum set for Reed; a yin-yang scarf draped over the window of a basement apartment in Pennsylvania, Sprite poured into an oversize mug with "Kick-Ass Motherfucker" printed on it, a cat peeking out from under the sofa for Ryves. We have entered a realm of young men at home with a lot of spare time on their hands. The desire to be involved with something authentic and significant thrums through everything they say.

So does a hankering after the cinematic. The earnest Ryves is an aspiring screenwriter; he tells the cameras, without irony, that his most recent script is "a kind of revenge thriller." Kevin Cheetham, as you might guess from the sub-noir rhapsody quoted in my opening paragraph, is caught up in an imaginary drama in which he plays the brooding hero, driven by personal demons to plunge into the heart of the action. In real life, this took the form of camping in his car alongside a bunch of media vans in a Watertown parking lot and taking superfluous video of police press conferences with his iPad to post on Reddit. (To be fair to Reddit, many users strenuously discouraged Cheetham from pursuing this self-described "mission.")

Anyone watching the disaster of FindBostonBombers unfold on Reddit that night could see that many of the contributors were living out their own Hollywood scenarios as well. They were the intrepid civilian sleuths who always outwit the police. They were the swashbuckling hackers, whose wizardry with computers dazzles the suits. They possessed the preternatural perceptiveness needed to scrutinize a seemingly innocuous photograph and spot the tiny detail ("Can you enhance that?") needed to crack the case wide open. Theirs was the power of the people, the nerds, the chronically underestimated, who, when tested, always prove their mettle and save the day.

Well, they do in the movies, at least. Nothing Reddit did contributed the least bit to the identification and capture of the Tsarnaev brothers. But what "The Thread" underlines is that citizens hampered the Boston Marathon investigation and harassed other citizens not when they attempted to do journalism, but when they attempted to act out pop-culture stories about journalists and detectives. It was a mess caused by people who live through their screens using their screens to fulfill fantasies they learned from still other screens, all in a harebrained attempt to be part of something real.

One of the more striking parallels in "The Thread" is the fact that the challenge of the Boston Marathon bombing story elicited a similar response from both the overmatched Ryves in his basement apartment and BuzzFeed's deputy news director, Gavon Laessig. A bouncing, giggly ginger with a novelty mustache whose usual work seems to consist of video features about manscaping and laughter yoga, Laessig is filmed curled up in an egg-shaped chair in BuzzFeed's New York office. He describes how the Boston story made the staff of one of the most powerful platforms in Internet media exclaim, "Oh, crap, we have to be adults now!" Meanwhile, as the comments thread for FindBostonBombers began to metastasize, Ryves recalls thinking, "I had to be an adult."

Some (but not all!) of the representatives of new media appearing in "The Thread" perform a familiar two-step, oscillating between "We are conquering the media!" and "Hey, we're just a bunch of kids having fun!" Collectively, Reddit can be much the same, one minute arguing that it makes traditional news organizations obsolete, and the next insisting that because it isn't a journalistic enterprise it shouldn't be held to the profession's standards. Here's the rub, though: You can't be an adult and a kid at the same time. Better yet, let me put it this way: With great power comes great responsibility. Surely you know that one, guys. It was in a movie.

The Thread is available to download and View-On-Demand on major platforms including iTunes.