TIME 100's biggest celebrity butt-kissing moments: "A voice that I can only describe as being blessed by God" 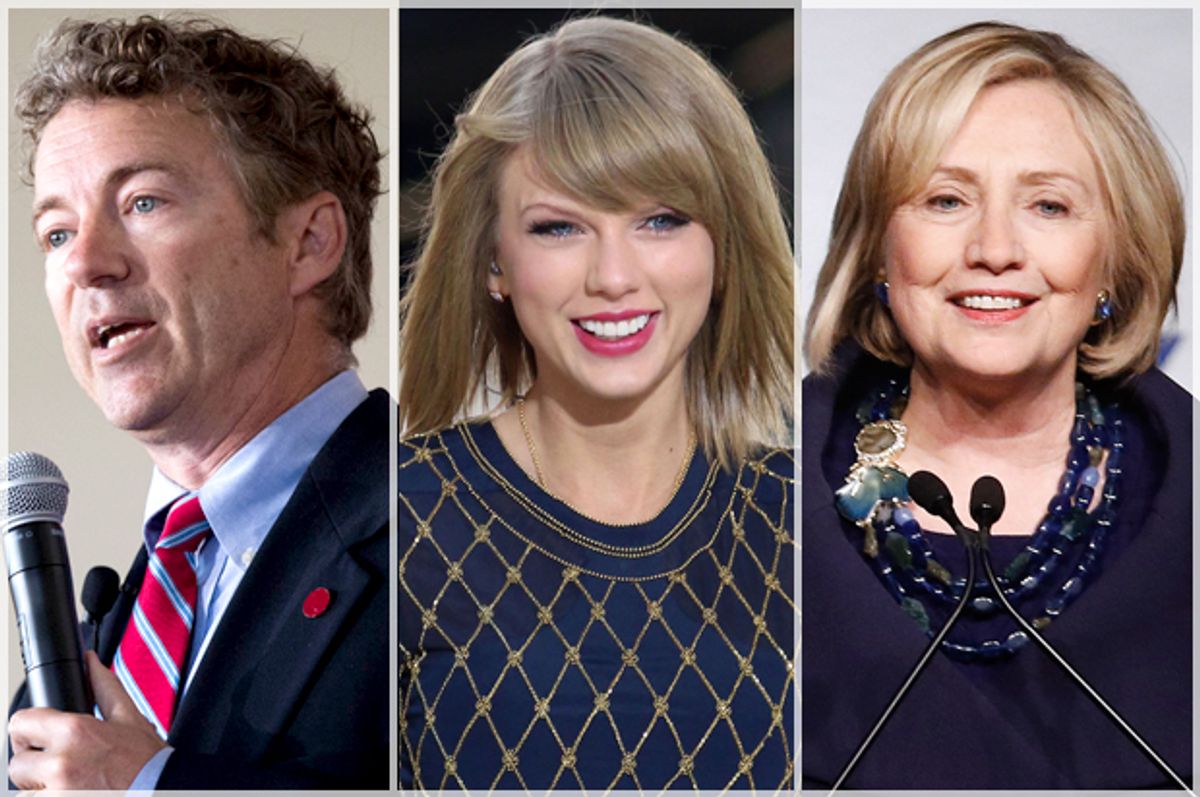 It's time for the annual Time 100, i.e. the shameless suckup-fest where our leading political, social and cultural luminaries try to outdo each another and see who can butt-kiss the hardest. Let's take a look!

1. Hillary Clinton on Elizabeth Warren:
"Elizabeth Warren never lets us forget that the work of taming Wall Street’s irresponsible risk taking and reforming our financial system is far from finished. And she never hesitates to hold powerful people’s feet to the fire: bankers, lobbyists, senior government officials and, yes, even presidential aspirants."

2. Rand Paul on the Koch brothers:
"The Koch brothers’ investment in freedom-loving think tanks will carry on for generations, reminding all of us that ideas and convictions ultimately trump all else."

"Hillary Clinton is not familiar. She is revolutionary. Not radical, but revolutionary: the distinction is crucial. She is one of America’s greatest modern creations. Her decades in our public life must not blind us to the fact that she represents new realities and possibilities. Indeed, those same decades have conferred upon her what newness usually lacks: judgment, and even wisdom."

Concealed within her fortress, the lord of Mordor sees all. Her gaze pierces cloud, shadow, earth, and flesh.

4. Carrie Underwood on Audra McDonald:
”She has acted on television and in movies, graced theater and concert stages and given a gift to countless fans with a voice that I can only describe as being blessed by God.”

6. Chris Rock on Kevin Hart:
"Hillary should announce Kevin as her running mate and be done with it.”

Chris Rock, much like Carrie Underwood, is not one for understatement.

"Yes, she is beautiful, and I would buy any lipstick or bottled water she is selling. Hell, I’d buy cigarettes if her picture were on the pack. But that’s not it (even though I think she could make a lot of money doing that)."

Mindy Kaling would literally purchase a bag of her own feces if Reese Witherspoon™'s face was on it.

7. Marina Abramovic on Bjork:
In 2010, when the volcano named Eyjafjallajokull exploded in Iceland, Björk sent me an email: “I’m so proud to tell you that our baby volcano is just born—it’s so beautiful!” Around the world, airplanes were being grounded because nobody could fly over Iceland. Everybody else was fearing nature, but Björk was worshipping it because she needs nature to breathe, like an Icelandic high priestess.

8. Michael Caine on Christopher Nolan:
"Christopher is very secretive, and each film has a code title. He had us call Inception by the name Oliver’s Arrow. On the set, no matter how hot it is, he wears an overcoat and sips tea all day. You wouldn’t be able to pick him out as the director. There’s no shouting and screaming—he’s a very quiet gentleman. If you get it wrong, you just do it again. It’s like working with a philosopher.”

There's a lot to parse here. Why was "Inception" called "Oliver's Arrow"? Nolan wears an overcoat in the summer? What kind of tea does he drink? Is Nolan our greatest contemporary philosopher? Discuss amongst yourselves!

9. Rupert Murdoch on Bob Iger
"Under Bob, Disney is hardly Frozen in time."

Guess he let this go.

10. Ehud Barak on Benjamin Netanyahu
"Chickensh-t he is not.”

The weird thing aboutt the Time 100 is that even when you’re writing about someone you’re critical about, you have to try and find something nice to  say.

11. Carl Icahn on Jorge Ramos:
"Jorge Ramos is silver-haired and gray-eyed, but inside that ring of steel beats a heart of gold."

Only through harnessing the anchorman's ring of steel will the Avengers be able to defeat Ultron and his minions!

12. Mariska Hargitay on Taylor Swift:
"I’m always trying to find the best words to talk to my kids (and myself) about growing up, but you can’t top her beautifully articulated advice. The haters are gonna hate, but, well, shake it off. She illuminates our inner music that lets us dance to our own beat."

"Taylor Swift is a goddess sent from on high to help us all be our best selves. Also, she named her cat after me, so I sort of owe her."

13. Anton Scalia on Ruth Bader Ginsberg
"What only her colleagues know is that her suggestions improve the opinions the rest of us write, and that she is a source of collegiality and good judgment in all our work."

"Guyyyyyyys why aren't you getting tattoos of me?"

14. Martha Stewart on Kim Kardashian:
“Despite the flamboyance, the self-aggrandizement and the self-promotion (Kim set out to break the Internet by baring her bum in an extraordinary photograph), Kim comes across as an enviable big sister in a clan where everyone seems to love one another. Are they indeed today’s Brady Bunch?”

Having Martha Stewart write about Kim Kardashian was an amazing call. And hey, if Martha thinks that the Kardashians are today’s Brady Bunch, and who are we to argue with her?

15. Oprah Winfrey on Lee Daniels
"That’s the reason actors love working with Lee. He forces you, in every breath, to stay in character. To find the bone-marrow truth in every scene, no matter what it takes to get there. He’s a truth seeker. “Less is more” is his credo. “Give me 1/8 of that” is one of my favorite notes from him."

I find it hard to imagine Daniels on the set of “Empire” going “Hey, Taraji, can we take Cookie down 7/8 notches?" But sure.