Indisputable proof that Republicans are warriors for the aristocracy

GOP contenders are pretending to care about inequality. But it's all for show — and Congress is about to prove it 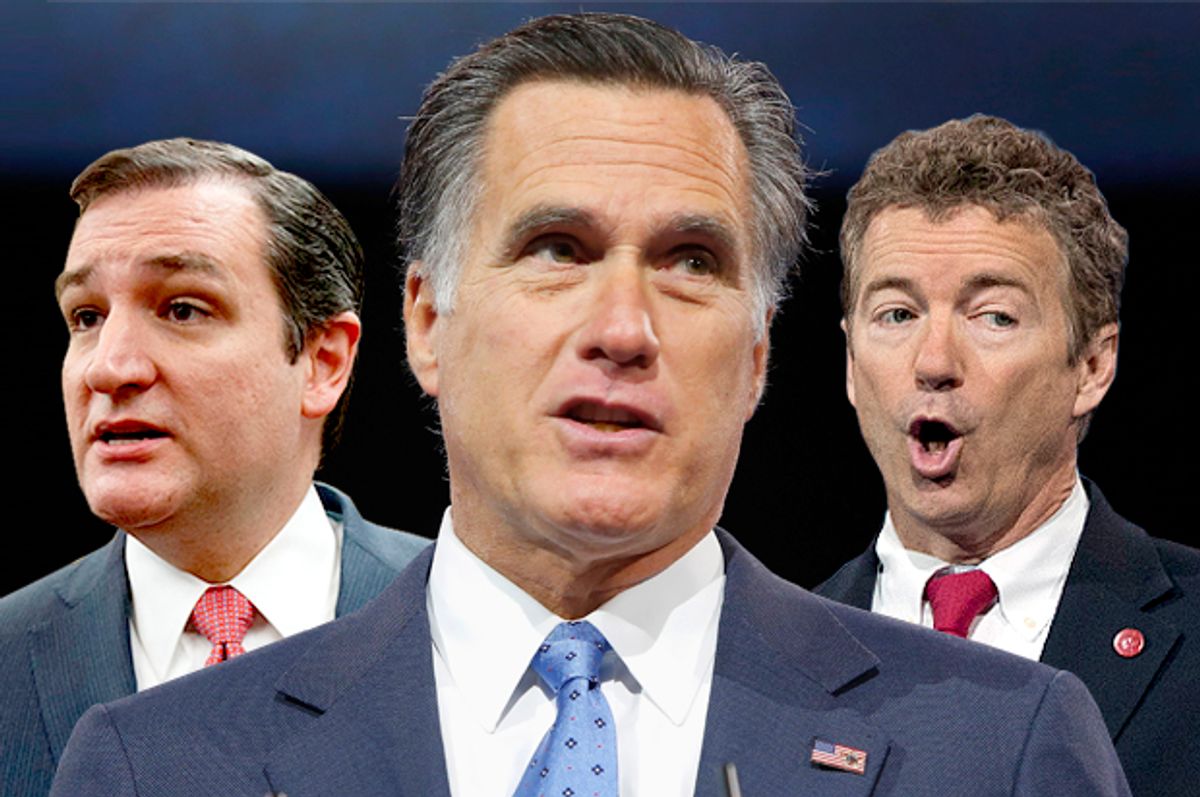 It's been quite interesting to see Republicans embrace the notion that wealth inequality (or any inequality) is something to worry their pretty little heads about. Over the winter we heard numerous reports of various GOP luminaries expressing serious concern that average Americans were getting the short end of the stick while the wealthy few reaped all the rewards. Ted Cruz might as well have put on a blond wig and called himself "Elizabeth" when he railed against it after the State of the Union:

“We’re facing right now a divided America when it comes to the economy. It is true that the top 1 percent are doing great under Barack Obama. Today, the top 1 percent earn a higher share of our national income than any year since 1928,”

And here we thought that was supposed to be a good thing. Aren't they the "job producers"? That's how weird the GOP's messaging has gotten lately. Mitt "47 Percent" Romney clutched his very expensive opera-length pearls, wailing that “under President Obama, the rich have gotten richer, income inequality has gotten worse and there are more people in poverty than ever before.” Rand Paul channeled his heretofore unknown inner Bernie Sanders, proclaiming that “income inequality has worsened under this administration. And tonight, President Obama offers more of the same policies — policies that have allowed the poor to get poorer and the rich to get richer.” It seemed to many observers at the time that this was a very odd choice of issue for potential Republican presidential aspirants to take up, since every item in the domestic GOP agenda would make wealth inequality even worse. This certainly wasn't something they lost any sleep over before now.

As Brendan Nyhan at the New York Times explained in February, this sort of thing is called "issue-trespassing," where one party attempts to co-opt an advantage of the other by pretending to care about something nobody thinks they care about. In this case, the GOP seemed to be admitting that their reputation as the party of the 1 percent wasn't helpful to their cause, so they decided to try to shift the blame to President Obama. Nyhan points out that data suggests this rarely ever works, because people rely on party stereotypes no matter how hard those parties try to co-opt the rhetoric of the other side for their own use.

Certainly, it's hard to see how anyone can possibly believe that the Republican Party, which fetishizes low taxes for the rich above all other priorities, truly cares about wealth inequality; but perhaps this is one of those times when the mere pretense of caring signals that they understand how badly their reputation of callous disregard for everyday Americans' economic security has hurt them.

In any case, this shallow attempt at appearing to give a damn was short-lived. This week the GOP is voting, as they always do, to ensure that the heirs to the Wal-Mart fortune won't be faced with the terrible responsibility of having to pay taxes on their inheritances. Dana Milbank of the Washington Post pointed out just how successful these protectors of the progeny of the one percenters have been in recent years:

It had long been a conservative ideal, and the essence of the American Dream, to believe that everybody should have an equal shot at success. But in their current bid to end the estate tax, Republicans could create a permanent elite of trust-fund babies. The estate tax was a meaningful check on a permanent aristocracy as recently as 2001, when there were taxes on the portion of estates above $675,000; even then there were plenty of ways for the rich to shelter money for their heirs. As the son of a schoolteacher and a cabinetmaker, I’d like to see the estate tax exemptions lowered — so that taxes encourage enterprise and entre­pre­neur­ship while keeping to a minimum the number of Americans born who will never have to work a day in their lives. The current exemption of $5.4 million (the current estate tax has an effective rate averaging under 17 percent, according to the Urban-Brookings Tax Policy Center) does little to prevent a permanent aristocracy from growing — and abolishing it entirely turns democracy into kleptocracy.

No, that wasn't a mistaken cut and paste from the World Socialist Website. That really was Dana Milbank writing in the Washington Post, which is a testament to just how outlandish these Republicans have become. When mainstream columnists start using words like aristocracy and kleptocracy you know that something's in the air.

This is nothing new, of course. The conservative project has always been fundamentally about aristocracy. Sure, they love to wax on about freedom and liberty but the freedom and liberty they care about is the freedom to attain property and pass it on to their heirs. Everything else is secondary. What's more interesting is the way they are able to make ordinary people who will never benefit from this scheme -- in fact, they will suffer  -- agitate for it as if it meant the bread on their own table and the roof over their own heads.

Paul Waldman tackled this phenomenon in a piece for the American Prospect a while back. He concluded that voters didn't understand that the tax only kicks in for very high amounts, and that most people instinctively think it should be okay to bequeath your fortune to your kids -- regardless that the consequences of vastly wealthy people doing this are fundamentally un-American.

Americans tend to think that no matter what their current situation, eventually, they're going to be rich. Most of us are wrong about that, but that's what we think. It's practically our patriotic duty to believe it. So most everyone thinks that this tax will apply to their estate upon their death, no matter how modest that estate might be at the moment.

I will never forget hearing a caller tell Rush Limbaugh one day that he was happy for his CEO to make a lot of money because that meant the company was doing well and would probably give him a raise someday. Rush, needless to say, sagely agreed with his assessment, although he sounded a bit distracted. (I believe it was around the time he had negotiated his several-hundred-million dollar contract, so he was likely engaged in counting his fortune.)

This is one of the main keys to the perpetuation of the aristocratic project: Convincing average people to support "their betters" with the promise that they will themselves benefit. In the old aristocracy, this used to be a simple pledge of fealty to ones noble house, but American conservatives have "democratized" it to make the serfs and peasants believe that they too will be nobles one day if only they agree to allow the rich to keep every last penny of their wealth. It's a very sweet scam.

Unfortunately for the conservatives, inequality is becoming impossible to ignore and the people are starting to wake up to what is happening. The confusion on the right about how to handle it is a sign that it's verging out of their control. And again, as Nyhan pointed out in his NYT piece, simply paying lip service to a democratic, egalitarian concern is probably not going to be enough to give them cover when the Republican stereotype of being servants of the rich is so deeply embedded in our political culture. (Thanks Mitt!) Voting for the Paris Hilton tax exemption bill certainly won't help.

On the other hand, it could be worse. The former British Prime Minister Tony Blair is now saying outright that democracy isn't working and is calling for benevolent dictatorships. It's convenient that the United Kingdom maintained their monarchy isn't it? It will be so much easier than building one from the ground up.