The GOP candidate thinks it makes him sound like a swell guy, but he’s just showing a kinder, gentler bigotry 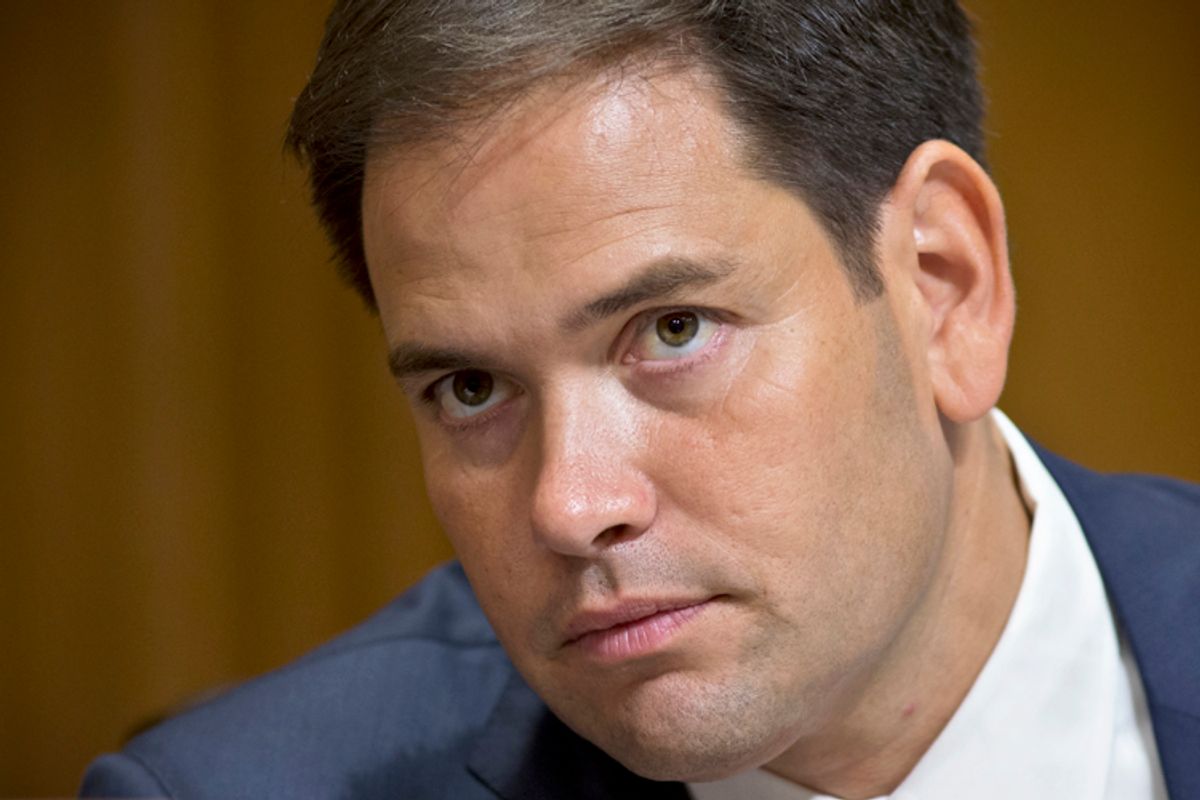 Sen. Marco Rubio is probably still smarting over Jake Tapper’s smackdown on Tuesday, in which the CNN anchor told the Republican who purports to be the candidate of the future that his anti-marriage equality stance makes him the “candidate of yesterday,” given that most Americans, especially younger voters, support gay marriage today.

So on Wednesday Rubio came back with the news that hey, if a gay family member or friend got married, he’s so futuristic, he’s ready to attend their gay wedding.

“Ultimately, if someone that you care for and is part of your family has decided to move in one direction or another or feels that way because of who they love, you respect that because you love them,” he told Fusion’s Jorge Ramos.

“You respect that because you love them... but you don’t respect that if you don’t love them? Let’s get this straight: If Rubio had his way, his gay relative or friend wouldn’t be able to get married. But since so far the courts and some states’ voters have protected that right, he’s down to go to their wedding?

No word as to whether he’d provide the flowers, or bake the cake, if an anti-gay local merchant refused to do either under the “religious freedom” laws that Rubio also supports.

Rubio sounded so pleased with his open-mindedness, I’m surprised he didn’t bust out the old self-congratulatory chestnut, that “Christians love the sinner but hate the sin.” Such Christians also have the arrogance to cruelly decide that a person’s sexual orientation, so core to their being, constitutes "sin." That’s anything but open-minded.

Wisconsin Gov. Scott Walker tried a similar dodge last summer, running for re-election. He’d long been a staunch opponent of gay rights, even opposing legislation that would have ensured hospital visitation rights for gay couples. But after the Supreme Court rejected an appeal to uphold the state’s gay marriage ban, he announced “For us, it’s over in Wisconsin.” Also last summer he acknowledged that his son had been a witness at the wedding of Walker’s wife Tonette’s cousin, a lesbian. "Shelli Marquardt is the first lady's cousin," a Walker spokeswoman said in a statement. "She is a part of the Walker family who they dearly love."

But since Walker tacked right again to run for president, he’s been sounding like his old anti-gay rights self., even if he "dearly loves" his wife's cousin. As the New York Times observed in February: “He is trying to redraw his political image from a fiscally minded governor who warned his party not to be distracted by divisive social issues to a conservative presidential candidate who will fight hard for these issues.”

Of course the extreme Christian right viewpoint is no, you can’t attend a gay wedding, because your presence condones immoral behavior, which according to the fundies should also be illegal. Pat Robertson recently counseled a caller: “You don’t agree with it...By your attendance at the ceremony, you are agreeing with it … I just wouldn’t go. I would tell your child, ‘I love you but I cannot condone this. We will always love you but I don’t condone this activity.'”

In fact, since Rubio believes baking a cake or arranging flowers represents “condoning” gay marriage, it’s hard to see how actually attending a wedding as a celebrant doesn’t do the same. Pat Robertson’s argument may be cruel and extreme, but it is actually morally consistent. Rubio is clearly pandering to moderates, trying to soften his “candidate of yesterday” image by saying he’s down to attend gay weddings, just like all the cool kids are today. But it only underscores his gay rights hypocrisy.