"I hope she goes after a bear next and it rips her face off": Hunter who killed a giraffe now fending off death threats 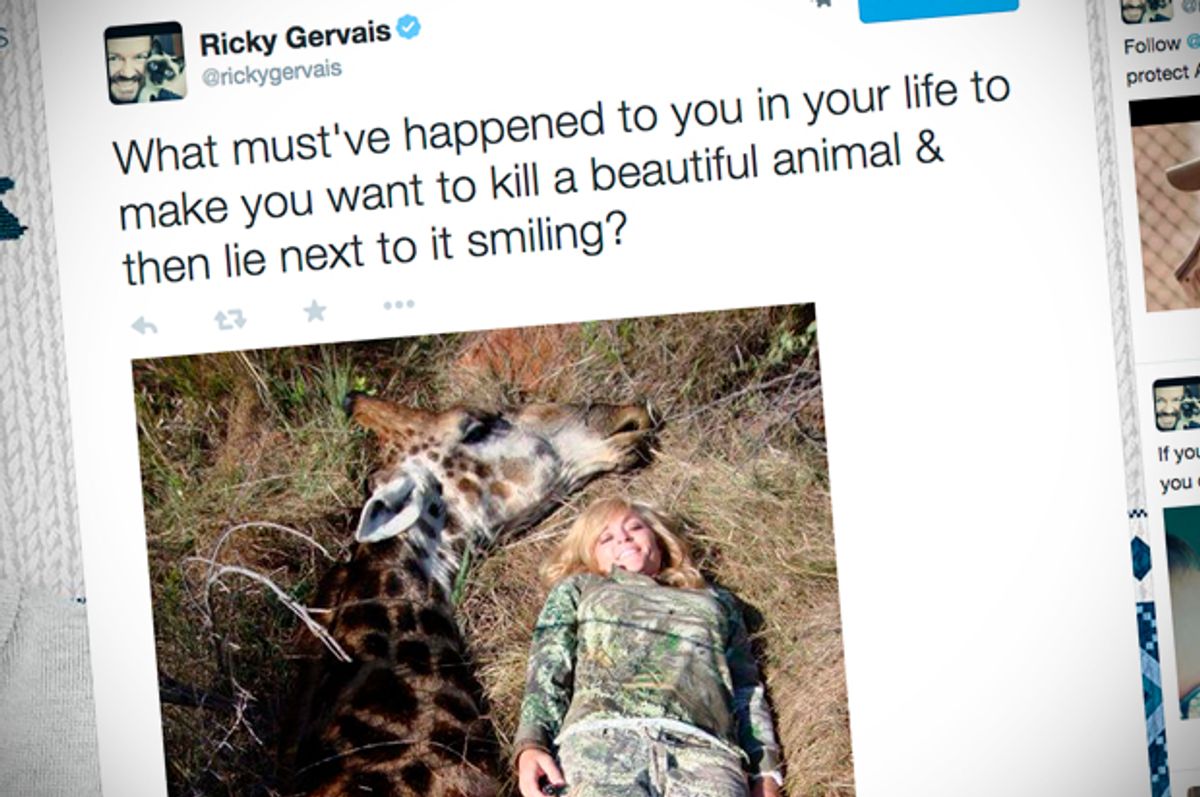 Just a suggestion: What if we dialed it all down a notch so that every goddamn interaction on social media does not become a scene from "Anchorman"? What if we could be skeptical and critical of the behavior of an individual or a business without, say, expressing the need to burn stuff down? What if we could be concerned about the welfare of animals without telling humans they deserve to die?

Case in point of the hour — the current saga of Rebecca Francis, a young hunter who found herself the target after Ricky Gervais posted on Twitter a photo of her next to a giraffe she'd killed, with the question, "What must've happened to you in your life to make you want to kill a beautiful animal & then lie next to it smiling?" Instantly, his tweet sparked intense reactions — and strong sentiments over what karmic justice Francis deserved. "May you die a lonely, horrible death," wrote one person, while another chimed in, "I hope she goes after a bear next and it rips her face off," and yet another asked, "When U R old & past yr breeding years may I shoot U in the neck & lie next to U smiling while U die?" I think it's safe to say that the person who tweeted, "I hope Rebecca Francis will die for all the animals she killed and then she will go to hell #protectnature" may not understand the meaning of the word "irony."

Francis, a 41 year-old mother of eight, has a Web page full of happy photographs posing next to dead animals and a maxim that "You should live life to the fullest with no regrets, and push yourself to the limit." On the Hunting Life Facebook page Tuesday, she issued a statement that the contentious photograph was from a trip to Africa five years ago. She claims that she had been approached to "preserve this giraffe by providing all the locals with food and other means of survival," and says that "Once he was down there were people waiting to take his meat. They also took his tail to make jewelry, his bones to make other things, and did not waste a single part of him. I am grateful to be a part of something so good." This did little to assuage the commenters content to call her an "ugly scumbag" and tell her, "I hope you die a very painful death." The outcry — and Francis' defense — are similar to previous incendiary hunting controversies. Last year, then 19 year-old "huntress" cheerleader Kendall Jones created a commotion when she claimed Facebook had deleted some of her hunting photographs, which soon earned her the Internet nicknames "bitch," "slut" and "bimbo."

I am not a fan of hunting, especially the kind of hunting tourism that often involves spending large sums of money to go to other countries to kill exotic animals. But it disturbs me very deeply when people like Ricky Gervais, mostly men with a huge army of fans, rather casually decide to unleash the wrath of the Internet on someone they deem morally suspect — especially when it's a woman.

As Jacqui Shine adeptly explained earlier this week in Buzzfeed, not all public shaming is equal. She notes how Jon Ronson's "So You’ve Been Publicly Shamed" covers disgraced journalist Jonah Lehrer's public downfall and the terrifying experience of Adria Richards after the notorious Donglegate incident without much acknowledgment that "Being shamed doesn’t affect people’s lives equally." Instead, Ronson calls Richards — who was doxxed, threatened and fired — the "inappropriate shamer" in her episode. And as Shine puts it, "We shouldn’t have to face a gauntlet of shame when we make mistakes. But we’re also subjects of wildly disproportionate privileges and privations." That's a hugely important distinction. Saying you wouldn't cater a same-sex wedding or posing next to an animal that you ostensibly had permission to kill are things that justifiably will not make you popular with everybody. The rest of us have a right to not patronize your businesses or to question the ethics of your recreational pastimes. But that is not a misogyny hall pass. That is not a green light to threaten anybody or wish harm upon her. And you don't get to hide behind a warped idea of justice when you're a just a bully and a troll.