Wall Street's new huge gamble: Why they're betting Hillary Clinton will stay in their pocket

Clinton's praising Elizabeth Warren, but the 1 percent isn't worried. They may be in for a nasty surprise 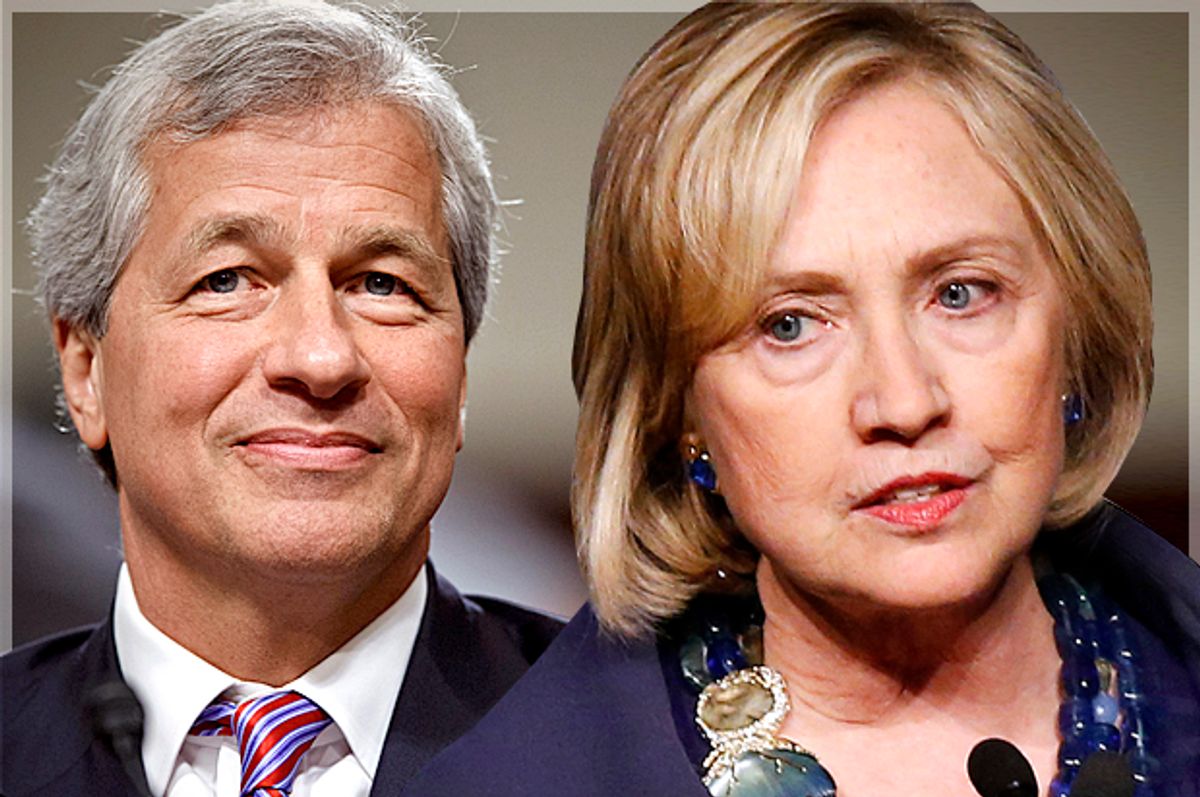 Hillary Clinton’s perfunctory campaign to be the Democratic Party’s next presidential nominee has started, and there is plenty about it that we still do not know.

Will she emphasize her status as a living legend of American feminism? Will she promise to bring back the glory days of her husband’s tenure during the booming 1990s? Will she try instead to align herself with the “coalition of the ascendant,” the racially and economically diverse mix of voters who twice made Barack Obama president? Is the media’s coverage of her really this godawful already?

Pundits on TV and Twitter will spend an inordinate amount of time reading the tea leaves and grasping at straws. But that’s all they’ll be doing — at least until this summer. (Except for the last question, the one about the media, for which the answer is a thundering, unequivocal: Yes, and we’ve only just begun.)

But while most of these questions are important, there’s one known unknown in particular that looms above the rest. It’s a question whose answer will not only tell us much about the latest (and probably last) public iteration of Hillary Clinton, but will also tell us much about the future of the Democratic Party. And here it is: How will Hillary Clinton treat the titans of Wall Street, her onetime boon companions?

Whether you expect her to bash them on the stump or shield them from the rabble, you could make a decent case either way. Her rhetoric so far, her vocal support for the Dodd-Frank law, and her fulsome embrace of Sen. Elizabeth Warren — Wall Street’s current enemy No. 1 — indicate she’ll choose the former approach. But the early hints of her policy platform suggest she’ll focus more on unions and working women, while leaving the “Masters of the Universe” essentially untouched. Maybe she’ll try to echo President Obama, who decries inequality but shirks from assigning blame.

Despite such a paucity of evidence to interpret, however, a new report from Politico finds Wall Street itself believes it knows the answer. This populism stuff, it’s “just politics,” says one “major Democratic donor,” voicing the conventional wisdom of what passes for liberalism among the 1 percent. “Nobody [on Wall Street] takes it like she is going after them personally,” another tells Politico, which reports that Clinton’s mild criticism of the wealthy has inspired just a “meh.”

One Democratic operative, an advisor to the billionaire Tom Steyer, says that “any Democrat running for president would talk about [inequality].” It’s as expected, he says, “as the sun rising in the East.” Another says Clinton’s claim that “the deck is still stacked” for the mega-rich is not even bad enough to count as a necessary evil, because “the vast majority” of her wealthy supporters think that inequality “needs to be addressed.” A Morgan Stanley executive and “confidant” of Clinton’s shrugs that he isn’t worried: “This is basically who she has been.”

Keeping in mind her husband’s fondness for deregulation, as well as her former position as a senator from New York, it’s hard not to think there isn’t at least a kernel of truth in Wall Street’s analysis. At the same time, though, there’s a precedent to such breezy indifference being mistaken — like when the financial industry showered then-Sen. Obama with praise and donations, a decision that, by 2012, many of them had come to regret. Even though Obama was promising in 2008 to enact specific reforms to Wall Street, its denizens still were shocked and horrified by his talk of “fat cats” and the passage of Dodd-Frank.

Maybe the problem, as is often the case, is that Wall Street isn’t quite as brilliant as it thinks it is. Maybe it’s possible that there’s no direct correlation between being worth listening to and being a member of the 1 percent. As Noam Scheiber wrote in 2012 in the New Republic, Wall Street is “shockingly unsophisticated" in its understanding of U.S. politics. They fall in love with candidates who, in a risible act of psychological projection, they see as conquering heroes. Then their heroes crash on the shoals of reality and Congress, and it’s on to the next.

Hard as it is to admit in this era of instant-gratification, we simply don’t know the answer to this $64,000 question (which, considering the circumstances, is probably better pegged at $64 million). And with so little to go on, whether you’re inclined to believe Clinton is hoodwinking rank-and-file Democrats or the plutocrats of Wall Street will be mostly based on your ideological presuppositions. My expectation, for what it’s worth, is that both groups will end up feeling disappointed.

Because, above all else, Clinton is a politician. She’ll do whatever she thinks victory requires — no more, no less.