“Orphan Black” is back, with new clones: Muddled and distracted, season 3 falls short

Tatiana Maslany is still amazing and the show is still entertaining, but some of that magical suspense is gone 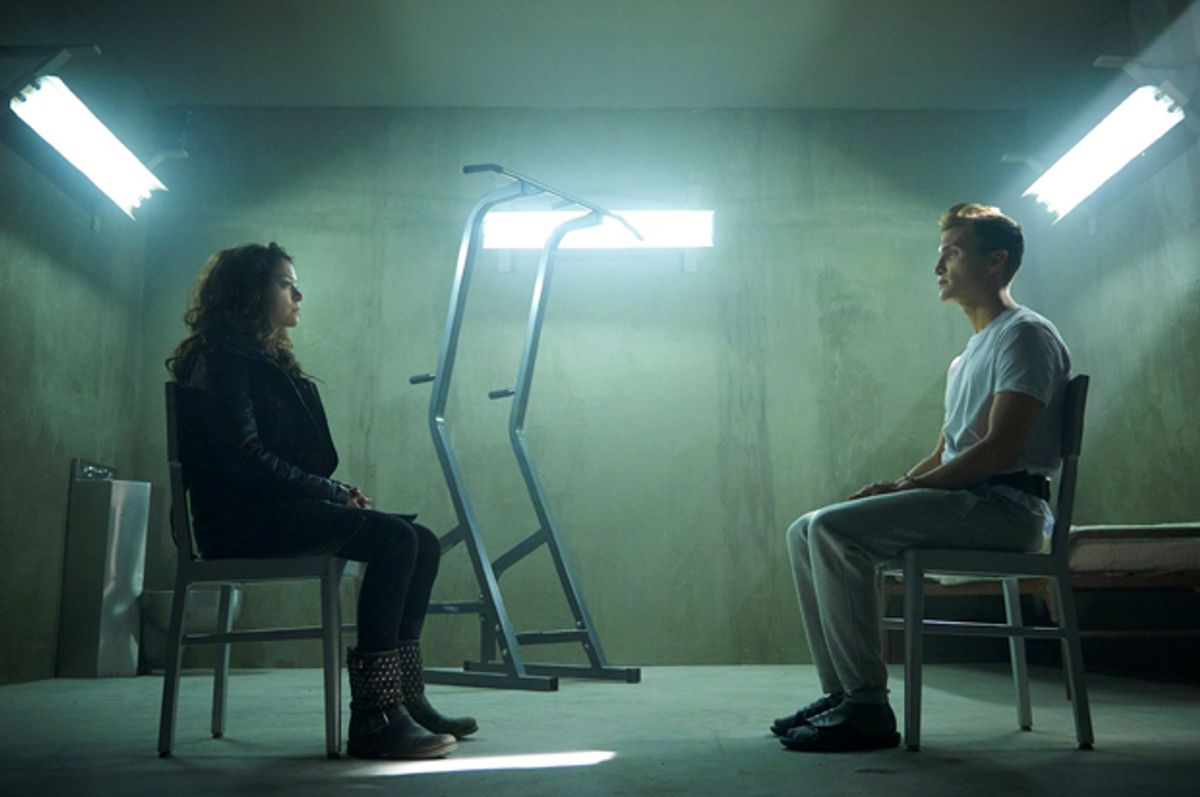 BBC America’s “Orphan Black” started its run, two seasons ago, with one of the most indelible opening scenes in TV history — on par with the first scene of the “Battlestar Galactica” miniseries, another science-fiction series that broke out to the mainstream. A woman stands on a platform, waiting to take a train. It’s late at night, and the station is mostly deserted. She spots another woman, dressed very professionally and clearly distraught. The other woman looks in our direction for a moment, and we can see what the first woman sees: The other woman is the first woman, or at least, looks exactly like her. As this recognition sinks in, the other woman, possessed by unknown emotion, steps in front of the oncoming train. Sarah — the first woman — responds with what turns out to be characteristic impulsivity. A crowd runs to where the woman’s body has been crushed on the tracks. Sarah runs in the opposite direction, to pick up the handbag left on the platform. Where there is confusion and horror, there is also, helpfully, opportunity.

Creators Graeme Manson and John Fawcett described that scene as the germ that spawned “Orphan Black” when I saw them speak last summer at the Austin Television Festival. It’s an isolated moment that sets the stage for an enormous amount of suspense and calculation — one that takes much of the first season to unravel, as Sarah discovers who this other woman was, and why they had the same face. “Orphan Black” didn’t come out and say it was about cloning for a good few hours of plot twists, which heightened the resonance of the characters discovering that they were clones when it was revealed. This is not a show that is delighting in the novelty of scientific advancement; this is a show that inventories every specific way that cloning could go wrong, from the perspective of the women that are being manufactured.

“Orphan Black,” which returns for its third season Saturday night, found its way to critical acclaim through the double-barreled cannon of Tatiana Maslany’s out-of-nowhere brilliant performance as 12 different clones and the intensely resonant storytelling of women fighting for ownership of their bodies. Every new discovery in the story has been another turn of the screw, for the clones in the show and for the audience watching at home — first, the women are clones; then, they are the property of a corporation; then, their children (if they have not been programmed to be barren) are commodities; then, glitches in the process result in life-threatening illnesses.

It’s a question asked by a lot of genre stories, from “The X-Files” and Margaret Atwood’s “The Handmaid’s Tale” to recent installments like Kazuo Ishiguro’s “Never Let Me Go” and the upcoming film “Ex Machina,” written and directed by Alex Garland. The politics of the future is the province of science fiction. “Orphan Black” is captivating for being a too-familiar story — the struggle of modern-day feminism, writ fantastically, but chillingly, not so fantastically, not really. As Caroline Framke wrote in her excellent episodic reviews at the A.V. Club:

Women have always, always been reduced to their reproductive value, or more simply, to their bodies. Yes, leaps and bounds have been made in past years, but the default consideration of a woman’s worth is to consider her body. Is it good? Can it be useful, or at least controlled? If so, congratulations, woman — you’re worth something! For these reasons, there’s no doubt in my mind that if human cloning were to become a reality, it would start with a woman. […] Orphan Black is tackling the already fraught issue of female agency and posing a chilling question: what would happen if we could create and own women?

Or, as Jill Lepore wrote just this week in the New Yorker: “ The series, which takes as its subject a field of research that led to the development both of several forms of contraception and of infertility treatment, is obsessed with female reproductive organs.” This is not a show devoid of gender commentary; this is a show wholly built on the notion of women’s bodies at the mercy of scientific progress, medicine, capitalism, religion, politics… insert your own arm of the patriarchy here. If that weren’t enough, Lepore further offers this bit of Freudian analysis, about the prevalent violence and body horror of the show: “The show’s go-to wound is the puncture: the act of penetration.”

Which is why one of the strangest developments of last year’s season finale was the introduction of a new line of clones, via something called Project CASTOR. So far, we’ve only met clones that look just like (and are played by) Tatiana Maslany — petite brunettes with piercing gazes, albeit in many different incarnations. Now the show has introduced male clones, played with varying degrees of bewitching psychosis by relative newcomer Ari Millen. The male clones were far more intentionally manufactured to be super-soldiers; where Sarah and her clone-sisters were scattered across the Western hemisphere and largely forgotten about, until now, the male clones have all grown up together, serving the same military master.

It is — if you must introduce male clones — the absolute best way to go about it, for a show so invested in the political ramifications of advances in science. Clones used as weapons of war is an idea that dates back to the ’70s, when the toll of Vietnam was fresh in the American consciousness: Nebula Award winner “The Forever War,” by Joe Haldeman, was directly inspired by Vietnam; “Star Wars” has a whole era of its history defined by clones used as soldiers, including the character Boba Fett.

At the same time, it’s a story that feels distracting more than it seems revealing. What has become clear, in the first few episodes of this third season, is that the tense, rich suspense of the show — its moment-to-moment, ever-shifting reality, first established in that opening scene — has given way to a muddled story that has more resonance after the fact than in the moment itself. It’s always interesting — Maslany is particularly transcendent when she acts as one clone disguised as another clone, which occurs again in season 3, and the show even finds a way to introduce waterboarding into its already politically charged narrative. But “Orphan Black” lost its grip on the story sometime early in season 2, and introducing even more characters has not proven to be a way to reclaim it.

A close analogue, to my mind, is ABC’s smash hit “Scandal,” which is in the middle of its fourth season — at this point, “Scandal” is more relevant for what it insinuates about our world than it is about what it says about its own; it’s a set of resonant ciphers built into a rickety narrative structure. The third season of "Orphan Black" offers up far too many shadowy organizations, long-held conspiracies and characters with simmering secrets; little Kira (Skyler Wexler) is once again a bargaining chip, Helena (Maslany) has once again been abducted. Mrs. S (Maria Doyle Kennedy) is once again keeping some crucial information from Sarah (Maslany). One of the show’s romantic relationships, which took up an extraordinary amount of space in the second season, is broken up in the first episode of the third, presumably just to create more unresolved sexual tension for the show to play with.

Without the story, though — without the ruthless precision of Maslany’s performance as two identical clones clashing with each other — “Orphan Black” feels strangely diluted. A powerful story about women’s rights to their bodies has turned into a story that reads a little more like a national-security thriller (when you introduce super soldiers, you have to introduce their conflict, too). It’s still a very entertaining show, but it lacks that moment of recognition, when Sarah sees herself on the platform — that recognition that we, the audience, used to feel, watching these women struggle for the right to their own lives.