Jeb Bush and Martin O'Malley's dangerous disregard for democracy: Why they're wrong about public opinion

Disregarding public opinion may be perceived as a sign of resolve, but its implications are troubling 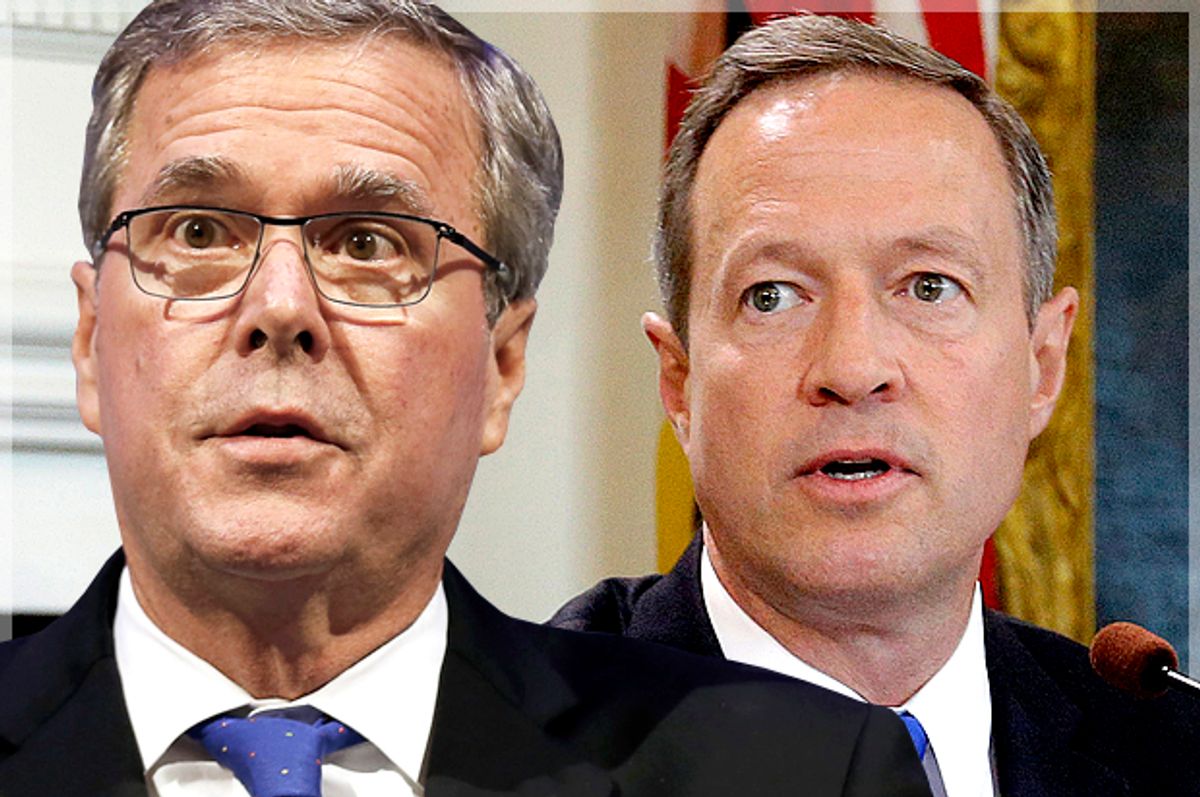 He’s been giving interviews and making media appearances, but in all honesty I still can’t quite tell why former Maryland Gov. Martin O’Malley is kinda/sorta running for president. And after seeing his latest subtweet of Hillary Clinton — a passive-aggressive zinger intended to raise questions about whether her new absolutist stance on marriage equality is sincere —  I’m not quite sure he is, either.

I say this not only because the presidency is a life-sucking nightmare of a job that no sane person would want, but because he keeps revising the argument for his crypto-campaign. At first, it appeared to be rather straightforward: O’Malley was definitely maybe going to run because Clinton simply was not liberal enough. (Never mind the fact that O’Malley spent much of his career presenting himself as a moderate technocrat.) But now that Clinton is reportedly planning to run as a progressive, his problem seems to be with her character, not her policies.

“I’m glad Secretary Clinton’s come around to the right positions [on same-sex marriage and immigration],” O’Malley said from that hotbed of leftwing populism, Harvard University. “I believe that we are best as a party when we lead with our principles and not according to the polls,” he added. “Every election is about the future, and leadership is about making the right decision … before sometimes it becomes entirely popular.” The implication, which has been made many times before, is that Clinton is insincere and lacks conviction.

That may be true — but does that really separate her from any other hyper-ambitious politician? There are certainly voters who hold romantic, “Mr. Smith Goes to Washington”-esque dreams about a candidate who never fails to tell it like it is. But O’Malley himself is a professional politician; he knows full well that no one is elected while keeping their conscience (assuming they have one) entirely clean. Even politicians as talented and self-righteous as President Obama have to “evolve” sometimes.

Hypocrisy aside, though, O’Malley’s zinger about Clinton and polling raises a bigger question — namely, is having a president who pays attention to public opinion really such a bad thing? If the question were put to him that way, O’Malley would almost certainly say no. He’d probably say that some issues, like marriage equality, which he called a “human right,” are just too important to be left solely to the people. But O’Malley also dinged Clinton for previously opposing driver’s licenses for undocumented immigrants; and I doubt that O’Malley would say driving a car is a human right.

To see why a knee-jerk disdain for public polling is usually illiberal, look no further than Jeb Bush, the former governor of Florida, who joins O’Malley as a pseudo-candidate running a pseudo-campaign. According to a reporter from Time, Bush said something while politicking in New Hampshire that sounded a lot like O’Malley. When he was asked to share his opinion about Obama’s goal of providing free and universal tuition for community college, Bush was dismissive. “It’s political” and “poll-driven,” he said. Bush implied the president was pandering — and pandering, of course, is always bad.

You’d hope this would go without saying, but a necessary component of a healthy democracy (or, if you’re a Tea Partier, “constitutional republic”) is that elected officials never forget that their job is to obey the people’s will. That’s not a hard-and-fast rule, granted. There are important exceptions. Yet those exceptions, again, have to do with rights: non-negotiable elements of citizenship and humanity. Things like property, liberty and a decent education. Or the most important of them all, which is the right to not be dead.

What’s ironic about O’Malley and Bush’s condescending treatment of polls, however, is that the administration most contemptuous of listening to the public (at least in the modern era) also set a new standard for trampling on people’s rights. Vice President Dick Cheney famously responded to a question about the Iraq War’s unpopularity with a sneering “So?” President George W. Bush, meanwhile, once said “I don’t give a darn” when Larry King asked him how he felt about his approval rating being south of 30 percent. Both men also supported indefinite detention and torture, two of the most heinous attacks on human rights possible.

So while it may sound odd, given our tendency to view human rights and democracy as forever in conflict, I’d suggest that O'Malley tread lightly when it comes to public opinion. Because the forty-third president had little regard for either — and that, I believe, was no coincidence.