My own personal Fight Club: How an English professor became a cage fighter

My teaching job was no longer exciting. My wife scoffed, but I joined the new mixed martial arts gym anyway 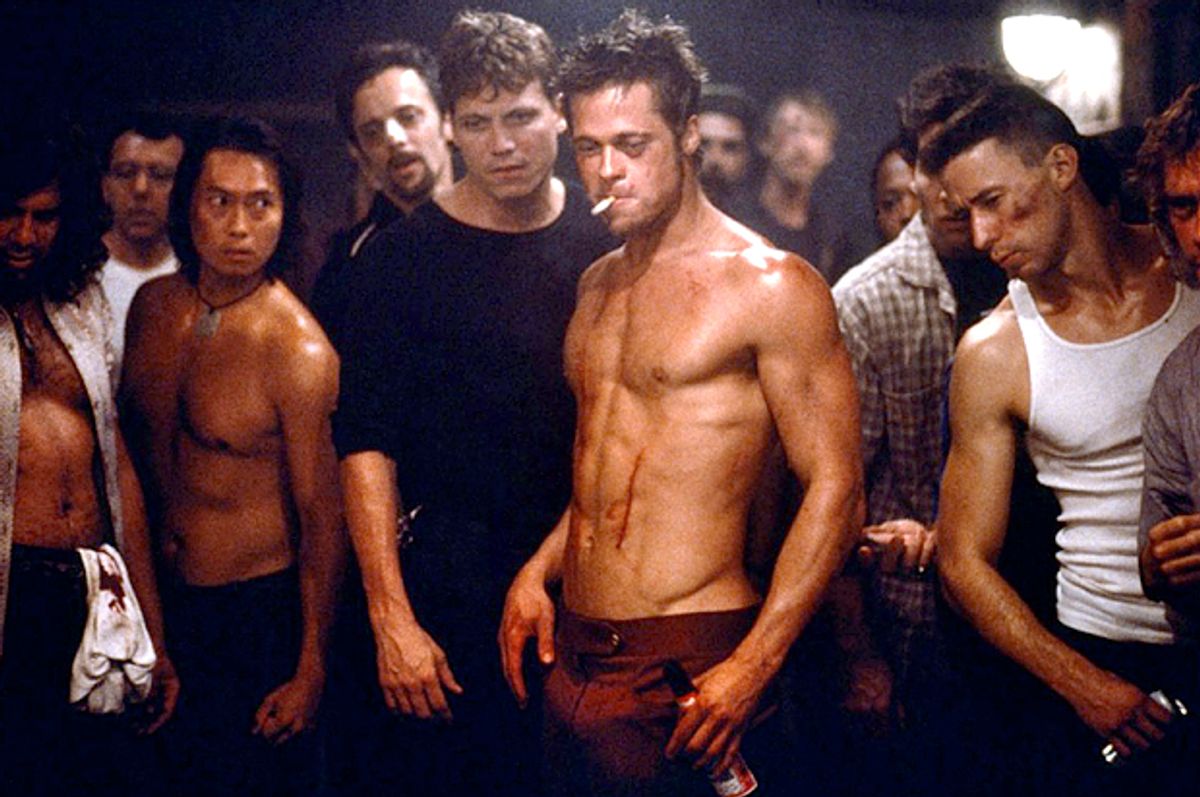 Excerpted from "The Professor in the Cage: Why Men Fight and Why We Love To Watch"

It’s the night of March 31, 2012, and I am standing half naked in a chain-link cage. I’m bouncing restlessly from foot to bare foot, trying to vent the tension building at my core. I’m surrounded by a swarm of men in Tapout T-shirts who are hooting at me over cups of beer. I can see the young man coming through the crowd to break my face, to strangle me to sleep. It’s like a nightmare.

I’m thirty-nine years old. I’m an English teacher at a small liberal arts college. My first book, "The Rape of Troy," focused on the science of violence—from murder to genocidal war—but I learned all I know from an armchair. I’ve never experienced real violence, never even been in a fight. But that’s about to change.

As I dance and pace, I watch them smear the young man’s face with Vaseline, watch them slip a mouthpiece between his lips. He’s making fists in his fingerless gloves, and I can hear my own gloves creaking as I do the same. People have the wrong idea about the gloves. They think they civilize the sport, but they are the soul of its barbarism. The fine bones of the hand are no match for a heavy skull. Knuckles shatter on heads. But if you wind the hand in ribbons of gauze and tape, then armor it in foam and leather, you turn the fragile fist into a fearsome club.

The young man strides up the steps to the cage, sinews writhing beneath his skin like snakes. The steel door clangs shut behind him, and they drive the bolts home, locking us in to battle until one of us can’t. The referee moves to the center of the cage. We will be fighting very soon, and I’m so relieved that I don’t feel the fear that I expected. There’s fear, but not the kind of terror that might unman me, might tempt me to hop the fence and run for home. Mainly I feel a sharpness of focus that I’ve never felt before. There’s nothing in the world except the young man—no sound or scent, no wife squirming in her seat, no cornerman murmuring soothingly at my back.

The referee stands sideways between us. He shouts to each of us in turn, “Fighter, are you ready?” We nod. In the next heartbeat civilization will melt away, the law will disappear, and we will meet at the center of the cage to try to kill each other. I have never seen the young man before, and I feel nothing for him but respect. And yet the crowd will cheer as I try to shut down his brain with punches, to wrench his joints, to throttle his neck until his eyes roll blindly in their sockets.

The referee yells, “Fight!” And so we do.

It was the culmination of a journey that began two years earlier when I was sitting in the cubicle I shared with other English Department part-timers, mulling the disappointments of my academic career.

I had a PhD, my name was on the cover of a few books, and I had already lived my fifteen minutes of fame (or what passes for it among university types), but I was still a lowly adjunct making $16,000 per year teaching composition to freshmen who couldn’t care less. My career was dead in the water. I’d known it for a long time. Whether this was because my effort to inject science into the humanities was before its time (the narrative that gets me through the day) or because that effort was wrongheaded (the more popular narrative in English departments) wasn’t the question. The question was whether I could summon the courage to move on to something new, or at least to provoke my bosses into firing me.

As I paced between my cubicle and the adjoining lounge, a streak of motion caught my eye, and I went to the window. There used to be an auto parts shop directly across the street from the English department. But now a new product was on display in the building’s big showcase windows. There were two young men in a chain-link cage. They were dancing, kicking, punching, tackling, falling, and rising to dance some more. There was a new sign on the building: MARK SHRADER’S ACADEMY OF MIXED MARTIAL ARTS. I stood at the window for a long time, peeping at the fighters through the curtains, envying their youthful strength and bravery—the way they were so alive in their octagon while I was rotting in my cube.

I began to fantasize. I saw myself walking across the street to join them. The thought of my peace-loving colleagues glancing up from their poetry volumes to see me warring in the cage filled me with perverse delight. It would be such a scandal. That’s how I’ll do it, I thought with a smile. That’s how I’ll get myself fired.

Over the next months, I began to plan a book about a cultured English professor—a lifelong specialist in the art of flight, not fight—learning the combat sport of mixed martial arts (MMA). The book would be part history of violence, part nonfiction "Fight Club," and part tour of the sciences of sports and bloodlust. It would be about the struggles—sad and silly and anachronistic though they may seem—that men endure to be men.

One day, not long after noticing the cage fighting studio across the street from my office, I met my family for lunch. When I ordered a salad, my wife gave me a skeptical look. “Salad?” she asked. “Are you okay?”

“Yeah,” I said. “But I’m so fat. Gotta get in shape.” When she asked why, I told her—a little shamefacedly—my whole dumb plan for becoming a cage fighter. “Why would you do that?” she asked. I fumbled for an honest answer. “You’ll be killed,” she pointed out. “You have no skills.”

Learning that my wife had no respect for my skills hurt, but it hurt worse to see how casually she learned to treat my danger. Much later, when I was having trouble getting a fight here in Pennsylvania (the state commission does not make it easy for older fighters), she recommended that I fight in Las Vegas, where her brother lives. “Anthony knows a lot of fighters,” she said. “I bet he could help get you a fight.”

The very idea made me clammy. “Vegas is the fight Mecca of the whole universe,” I explained to her. “I’m not exaggerating. Those guys would end my life. They would send me home to you in buckets.” A big part of me wanted her to talk me out of my whole suicidal plan. I wanted her to seize my hands and tell me through her big, pretty, man-slaying tears that it was just too dangerous and that she couldn’t stand the thought of scars on my handsome face. But instead she stared off into space like a prisoner dreaming of freedom.

“Yeah,” she said, “you should definitely fight in Vegas.”

But my wife’s question was a good one. Why did I really want to do this? Was I having a midlife crisis? I didn’t think so. Did taking up MMA—a sport where the whole point is to violently incapacitate the other guy before he can violently incapacitate you—seem like fun? It didn’t. Did I actually think that the cage could free me from the cubicle? Yes, I was just desperate enough to hope that it could. But there was more to it than that. I wanted to fight because I was simply fascinated by fighting, and I wanted to learn about it—and write about it—from the inside. I wanted to fight because I’d always admired physical courage, and yet I’d never done a brave thing. I wanted to fight, I suppose, for one of the main reasons men have always fought: to discover if I was a coward.

So in January 2011 I finally made the short walk from the brick and leaf of my college to the grit and stink of the local fighting academy. Beneath the English Department’s windows, I began studying the fighting arts alongside students, soldiers, frackers, an actuary, a busboy, a rock singer, a tree trimmer, and the occasional young woman. And each night I carried home, along with my bruises and abrasions, powerful insights into why violence is so attractive—and so repulsive.

When I crossed the street to try to become a fighter, I never stopped being a professor. I never stopped noticing the basic questions that hang in the humid air of an MMA gym, and I never stopped trying to answer them. There were the biggies: Why do men fight? Why do so many people like to watch? And why, especially when it comes to violence, do men differ so greatly from women? And there were the questions that seemed small at first but ended up having large implications: Why do human beings spend (waste?) so much energy on sports? Are traditional martial arts such as karate and kung fu sheer hokum? Why do fighters try to stare each other down? And why do nonhuman primates do exactly the same thing?

When I first joined the gym, I expected to write a book about the rapid rise of cage fighting in America and what its massive popularity says about us—not just as a nation, but as a species. I thought MMA was bad for the athletes who did it and bad for society at large. I saw cage fighting as a metaphor for something darkly rotten at the human core. But my library research convinced me that MMA tells us nothing particularly interesting about our place or time; everywhere and always, people have loved to watch men fight. And my gym research—sparring, interviewing, and finally fighting myself—upended all my other preconceptions. In short, I set out to write about the darkness in men, but I ended up with a book about how men keep the darkness in check.

One big idea threads through all the chapters to come: While always anchored in MMA, "The Professor in the Cage" is about the duels of men, broadly defined. Most historians trace the origins of the duel back to Europe in the 1500s. But far from being a Western invention, the duel is not even a human invention. Animals have their fights, too, and biologists refer to them tellingly as duels, sports, tournaments, or, most commonly, ritual combat. Ritual combat—think of elephant seals clashing in the surf, or deer locking antlers—establishes dibs on all good things through restrained contests that diminish risk. The same is true of human contests, only more so. Humans, especially men, are masters of what I call the monkey dance—a dizzying variety of ritualized, rulebound competitions. These events range from elaborate and deadly duels (pistols at dawn), to combat sports such as MMA or football, to the play fights of boys, to duels of pure language (rap battles, everyday pissing contests). They often seem ridiculous and sometimes end in tragedy. But they serve a vital function: they help men work out conflicts and thrash out hierarchies while minimizing carnage and social chaos. Without the restraining codes of the monkey dance, the world would be a much bleaker and more violent place.