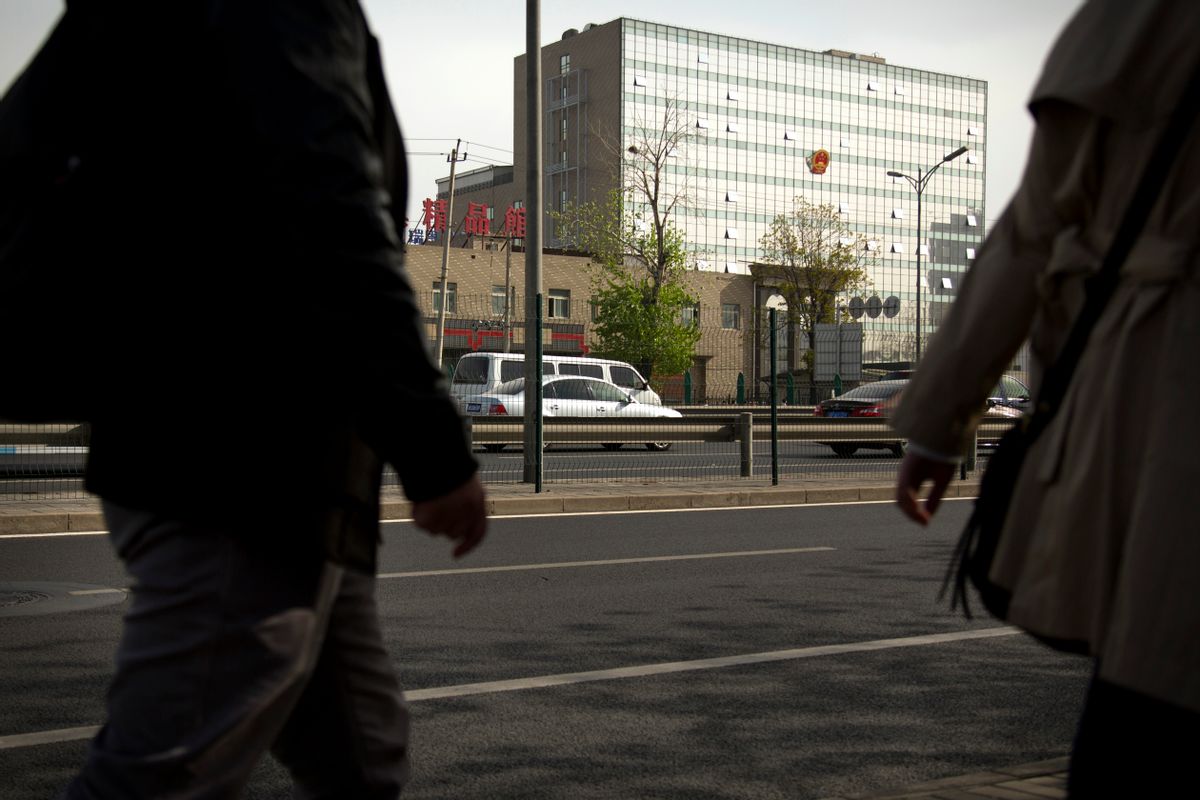 People walk near the Beijing No. 3 Intermediate Court in Beijing, Friday, April 17, 2015. Veteran Chinese journalist Gao Yu was sentenced to seven years in prison Friday for leaking a document detailing the Communist Party leadership's resolve to aggressively target civil society and press freedom as a threat to its monopoly on power. (AP Photo/Mark Schiefelbein) (Mark Schiefelbein)
--

BEIJING (AP) — A Beijing court sentenced a veteran Chinese journalist to seven years in prison Friday after convicting her of leaking a document detailing the Communist Party leadership's resolve to aggressively target civil society and press freedom as a threat to its monopoly on power.

The sentence against Gao Yu, 71, comes amid a widening clampdown on free speech that highlights the gap between China's vision of rule of law and Western notions of civil liberties and judicial fairness. The document Gao was convicted of leaking, deemed a state secret, underpins the clampdown under the 2 ½-year-old administration of Communist Party leader Xi Jinping.

The court verdict appears to confirm the authenticity of the leaked document, which had been reported since June 2013 but never was discussed openly by the leadership.

It verifies widely held assumptions about X's distrust of any social organization outside party control, recently manifested in the more-than monthlong detentions of five women's rights activists detained after planning to start a public awareness campaign about sexual harassment.

Gao had denied the charges, which could have carried a life sentence.

Gao's lawyer Mo Shaoping said Gao was convicted of leaking state secrets by giving the strategy paper, known as Document No. 9, to an overseas media group. The document argued for aggressive curbs on the spread of Western democracy, universal values, civil society and press freedom, which the party considers a threat to its rule.

Another of Gao's lawyers, Shang Baojun, said Gao did not speak during the verdict and sentencing, but told her brother, Gao Wei, that she could not accept the result. "We will definitely appeal," Shang said.

Speaking to The Associated Press, Gao Wei said his sister appeared thinner and frailer than before her detention a year ago.

The court seemed to disregard Gao Yu's defense lawyers but heard only the prosecution, Gao Wei said, a common complaint in such cases where the outcome is usually determined before the court meets.

Police patrolled the perimeter of Beijing's No. 3 Intermediate Court where the verdict was delivered. Journalists and foreign diplomats gathered at the court but were denied entry to the hearing.

Gao, who wrote about politics, economics and social issues for media in Hong Kong and overseas, has already served time in prison on state secrets charges more than two decades ago.

In a statement, human rights watchdog Amnesty International said that Gao was the victim of vaguely worded and arbitrary state secrets law that is often used against activists to quell freedom of expression.

"This deplorable sentence against Gao Yu is nothing more than blatant political persecution by the Chinese authorities," William Nee, the group's China researcher, said in the statement.

The Hong Kong magazine to which Gao is alleged to have leaked the document, Minjing Monthly, issued a statement reiterating its contention that the charges against Gao were false. The magazine first reported on the document in August 2013.

The magazine suggested the document already had been circulated at the time when Gao is alleged to have leaked it. It also said the information contained neither military nor economic secrets, but was merely a "correct guidance" on ideological matters.

"This unjust judgment of an outstanding Chinese journalist utterly destroys Xi Jinping's commitment to 'rule according to law'," the magazine said.