The actress admits she caved -- of course she did 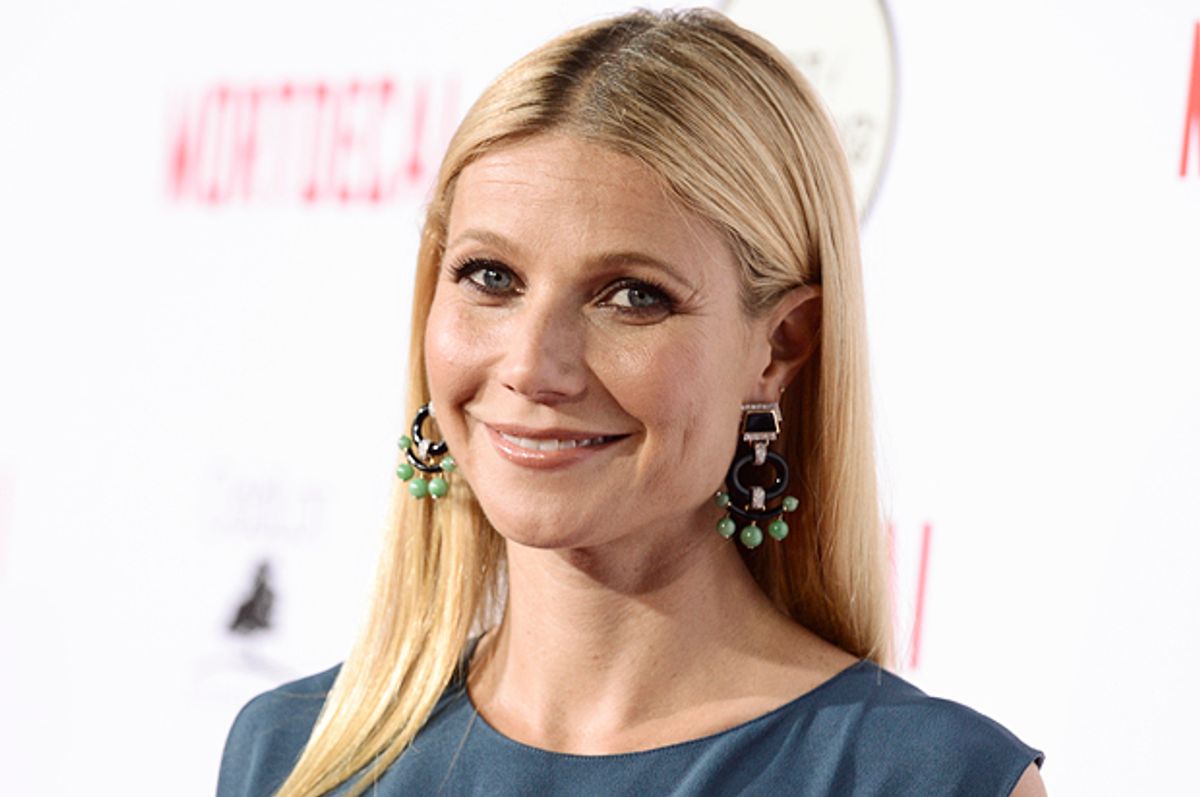 Chalk it up along with "Shallow Hal" and the Elie Saab pantsuit — Gwyneth Paltrow has another bomb on her hands. As she admitted late this week, the Academy Award winner lasted just four days on the SNAP Challenge — a hunger awareness initiative to get people to see what it's like to live one week on a food stamps budget. That's right — a woman who encourages her fans to spend $425 to do a 21-day "detox cleanse," a woman who says, "I like to do fasts and detoxes a couple of times during the year, the most hardcore one being the Master Cleanse I did last spring," couldn't hack it five days on what she believes low income people buy at the supermarket in a week.

There were cracks in her plan from the start. Last week, she drew sharp public skepticism when she posted a photo of her SNAP budget grocery haul — including beans, rice and a laughable number of limes — and the message, "This is what $29 gets you at the grocery store—what families on SNAP (i.e. food stamps) have to live on for a week." It didn't look like anywhere near enough for a person to live on — even a person who can apparently sail through Master Cleanse. Then Thursday, when images of her at pricey restaurant event appeared, her spokesman deflected criticism by saying, "She finished the challenge last week when Mario [Batali] challenged her on 3 April. She didn't get to post the photos of the groceries until the 9 April. Now the point of the challenge is to show just how impossible it is to live on 29 dollars a week which is why most families run out of money 2/3 into the week at least." She soon confirmed the "impossibility" of it, in a Goop post in which she admitted, "I personally broke and had some chicken and fresh vegetables (and in full transparency, half a bag of black licorice)."

Paltrow went on to write of her newfound respect for "a challenge that 47 million Americans face every day, week, and year" and to express that she is "outraged that there is still not equal pay in the workplace. Sorry to go on a tangent, but many hardworking mothers are being asked to do the impossible: Feed their families on a budget which can only support food businesses that provide low-quality food… And if women were paid an equal wage, families might have more of a choice in the grocery aisles, not to mention in the rest of their lives."

Where'd she bust? Paltrow writes of working off a $29 weekly budget, but she also refers to what "we" ate and shares recipes on her blog that she says her kids liked. How did she do this? Did she understand the parameters? When I did the SNAP challenge two years ago, I followed the guidelines and divided my state's monthly allowance to get what a weekly budget would be, and then factored the three of us in the house who would be participating. A one-week budget for each person. It was tight and it was hard, but I correctly figured out how much money I had to spend. I'm not convinced Paltrow did. And it doesn't seem, based on what she bought and where she bought it (her brands are from Safeway) that she tried to look around for lower priced places to shop or calorically dense, hunger satisfying items. She didn't have to do that on her own. She could have asked her dear friend Mario Batali, or budget eating advocates like Melissa d'Arabian or Jamie Oliver, to give her some ideas that she could use and share, to have a wider discussion about nutrition and eating right when eating on very little. But she didn't.

I believe that Gwyneth Paltrow is probably a very nice woman who, to the best of her ability, really is trying to do good in the world and to raise awareness of serious issues. Like her, I'm ticked off on a constant basis about wage inequality, and I'm glad someone of her fame is speaking out about it. I don't fault her for her intention. So here's what's galling anyway about her "poverty tourism" — and what gives me just a touch of white hot fury. It's that rich person arrogance of assuming that privilege equals ability.

Over the past few years, as the economy has fluctuated, I've seen well-off, once seemingly financially untouchable acquaintances fall on harder times, and I've also watched wealthy ones carry on blithely unaffected. And I've had an awful lot of conversations with people who think they're being insightful when they declare that it turns out it's really hard to get a job or to stretch a dollar. That it just can't be done. Actually, guys, it's hard for you to be poor. Lots of us are great at it. Lots of us do it every goddamn day.

I grew up lower income and have in my life had some good financial years and many, many really lean ones. I know how to read a supermarket circular and I know where to get cheap groceries in my high poverty neighborhood that happens to be rife with low-cost food markets. I know how to cook, for a family, on very little money. I can't sing on "Glee," but those are skills that I am proud of. So when a rich person appears to have walked blindly into her LA supermarket and just stopped shopping when the cash register hit her limit, that's insulting. It's insulting when rich people assume that because they're rich, that makes them smart or competent. It's insulting when they pull the "If I can't do this, who possibly can?" card. Hey, you know what, bite me. Having a juicer and a cocotte doesn't mean you know how to prepare food better than the rest of us or that you have something to teach us about it. Just because you -- blonde and wealthy -- can't do something that millions of Americans pull off every day doesn't make it "impossible." And to throw in the towel on a challenge that's about raising awareness of hunger, after four days, because you frankly blew it with the preparation, is not just a failure of the United States economic system. It's a failure of your own imagination, Gwyneth Paltrow.