Jay Z and Tidal's 1 percent backlash: Who decides the value of streamed music?

It's been 15 years since Metallica sued Napster — the free streaming "revolution" has happened. What now? 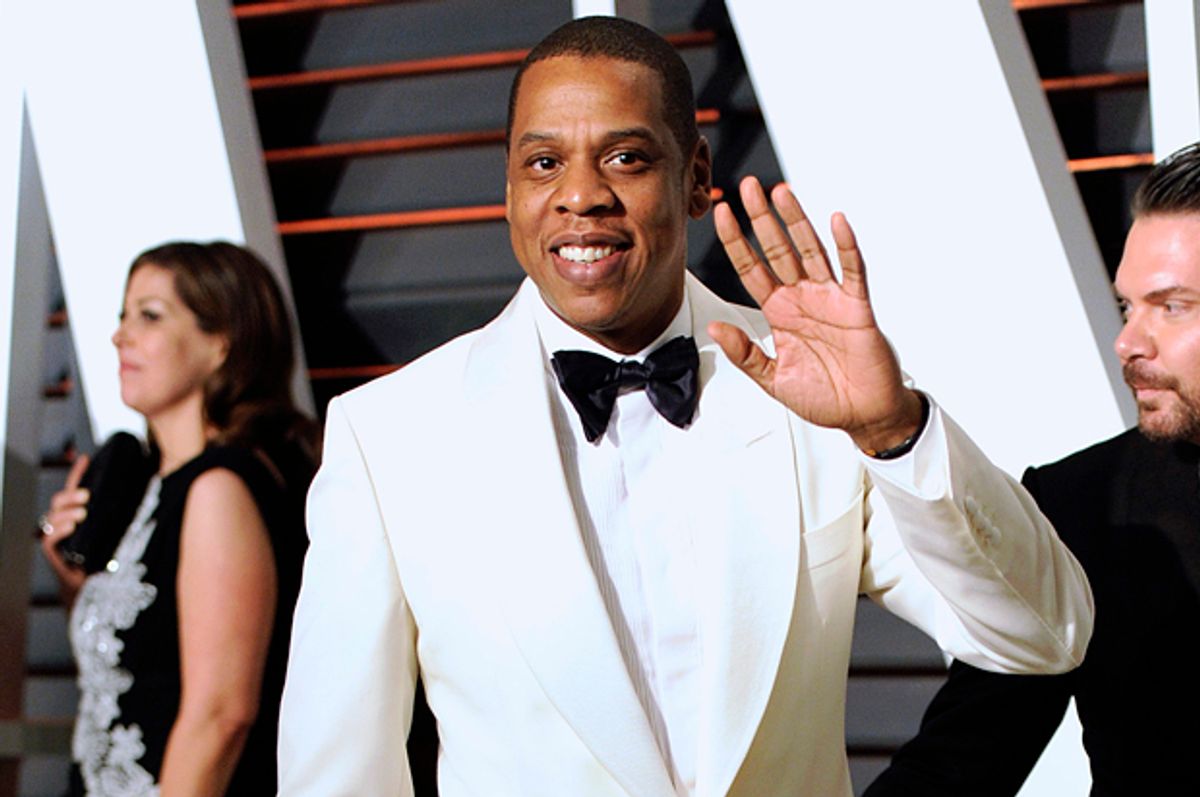 Jay Z's premium streaming music service, Tidal, launched in late March with plenty of high-profile celebrity support and promises that it would spearhead a cultural revolution by giving power back to the musicians. "This is a platform that's owned by artists," he told the New York Times. "We are treating these people that really care about the music with the utmost respect." Now that the dust has settled, however, the critics have come out in full force. Although Billboard ran an evenhanded overview that was cautiously optimistic, Gawker had some rather harsh words for the service: "Even the free trial I received felt like a ripoff."

Unsurprisingly, musicians themselves have been the most vocal naysayers of the artist-owned system. Mumford & Sons responded with "fart noises" when Tidal was mentioned in a Daily Beast interview, while producer/engineer Steve Albini in Vulture compared the service to a “budget version of [Neil Young's high-quality music player] Pono." Death Cab for Cutie's Ben Gibbard, meanwhile, expressed his own concerns in a separate Daily Beast interview.

"I think they totally blew it by bringing out a bunch of millionaires and billionaires and propping them up onstage and then having them all complain about not being paid," he said. “There was a wonderful opportunity squandered to highlight what this service would mean for artists who are struggling and to make a plea to people’s hearts and pocketbooks to pay a little more for this service that was going to pay these artists a more reasonable streaming rate. And they didn’t do it. That’s why this thing is going to fail miserably.”

Indeed, as stories continue to roll in from musicians receiving paltry payouts from streaming music services--for example, Portishead's Geoff Barrow just reported he received 1,700 pounds (or $2,500), for 34 million streams--it's hard to be optimistic that this platform is going to be any different than Spotify, Rdio, YouTube and their ilk. First and foremost, Tidal doesn't have a free or freemium level: The "premium" level is $9.99 per month, while the option with high-fidelity audio is $19.99 per month. That's immediately a strike against Tidal, especially because the pop, rock and hip-hop stars behind the service are all 1 percenters who aren't hurting for money. The gesture itself--the richest musicians in the world joining together to provide an expensive service to consumers--is shockingly tone deaf, out of touch and even a smidge condescending. As Gibbard alludes to, it's definitely not doing much to convey solidarity with most working musicians today.

And with its emphasis on high-quality sound, Tidal is counting on perceived value--the illusion of exclusivity, that anyone who joins the service is part of an elite club or receiving a premium product. From a marketing standpoint, that's nothing new; it's the premise behind selling things such as branded headphones, Apple products and basketball player-branded sneakers at a higher cost, or the whole idea behind bottle service. But the artists involved with Tidal have perhaps overestimated the value of their image and brand in the tech space, which is an entirely different animal than the music industry itself. (Jay Z learned this the hard way already, in fact, thanks to the hiccups with his 2013 Samsung deal involving the release of "Magna Carta Holy Grail.") Although tech gadgets such as Beats By Dre might benefit from celebrity endorsement, digital music loyalty is much more complex: Consumers prioritize ease of listening, song selection and choice, mobile accessibility and price more than they do a product backed by star power.

Of course, the other problem is that recorded music already has a premium product to offer fans that's not Tidal: vinyl records, which continue to grow in popularity and show impressive sales growth. As Albini points out, vinyl is the medium audiophiles are likely going to gravitate toward anyway. “It’s for the same reason that if you had a screen that displayed paintings in your living room, very few serious art enthusiasts would care for such a screen despite the fact that it might show you very high-resolution images of artworks," he told Vulture. "They want to own a piece of art that is a direct connection to the person who made it.”

Indeed, it's hard to have much of an emotional, tangible connection to a collection of bits and bytes, especially because digital music has never been an exclusive commodity. It's always been readily, widely available--whether downloaded from dubiously legal programs such as Napster and their descendants, cued up via YouTube, purchased from iTunes or Amazon, or streamed from online platforms. Convincing people that Tidal is offering something different and better is a stretch, since the service is entering an already-crowded market. For once, Jay Z is behind the curve.

In the end, much like other existing streaming services, Tidal's still not doing much to convince people that music is more than just something to be played in the background while doing other things. And that's the real issue the music industry is still struggling to figure out, and what's missing from the digital music conversation: These streaming platforms are trying to train people to buy music once again, but that won't start to happen--at least, in the ways needed to reach sustainability--until more people recognize that the music they're consuming has tangible value. It's an uphill battle: This month marks 15 years since Metallica sued Napster for copyright infringement, which means it's been over 15 years since cheap digital music first started becoming a dominant force in consumer habits. Digital music isn't some temporary cultural shift, but an ingrained part of how art is consumed.

Mumford & Sons guitarist Winston Marshall is cognizant of the challenges facing artists. “We don’t want to be part of some Tidal ‘streaming revolution’ nor do we want to be Taylor Swift and be anti-it,” he told the Daily Beast. “I don’t understand her argument, either. The focus is slightly missed. Music is changing. It’s f---ing changing. This is how people are going to listen to music now—streaming. So diversify as a band. It doesn’t mean selling your songs to adverts. We look at our albums as stand-alone pieces of art, and also as adverts for our live shows.”

He's on to something. So are platforms such as Patreon--which lets people chip in money to artists as they create--or sites such as PledgeMusic and Kickstarter, which often let fans donate money to pre-order records, thereby making them a small (but vital) part of the creative process. Of course, even these sites have their downsides--namely, so many musicians are doing these sorts of campaigns now, fans have to pick and choose whom they support and how much they can give. Call it benevolence burnout.

It remains to be seen how Tidal is going to respond to the accusations against it, although they're certainly listening. In fact, just this week the service launched Tidal Rising, which NME says a press release noted: "gives voice to tomorrow’s biggest names" and "is a program dedicated to promoting emerging and independent artists from around the world. Every week, nascent talent in any genre will emerge." A cursory glance at this page is impressive; buzzy artists such as Waxahatchee, Joywave, Tink, Wolf Alice, Drenge and Torres are all included among dozens of smaller acts.

More curation like this will certainly help Tidal's image as a haven for the already successful, especially since it mirrors the democratic spirit that's always made the Internet--and music discovery--such a pleasure. "The internet provides access to materials and things," Albini told Vulture. "Creating these little streaming fiefdoms where certain streaming services have certain artists and certain streaming services have other artists is a crippled use of the internet. If the internet has demonstrated anything over the years, it’s that it has a way of breaking limitations placed on its content.”