"You bastards": How bedbugs took over our homes -- and our minds 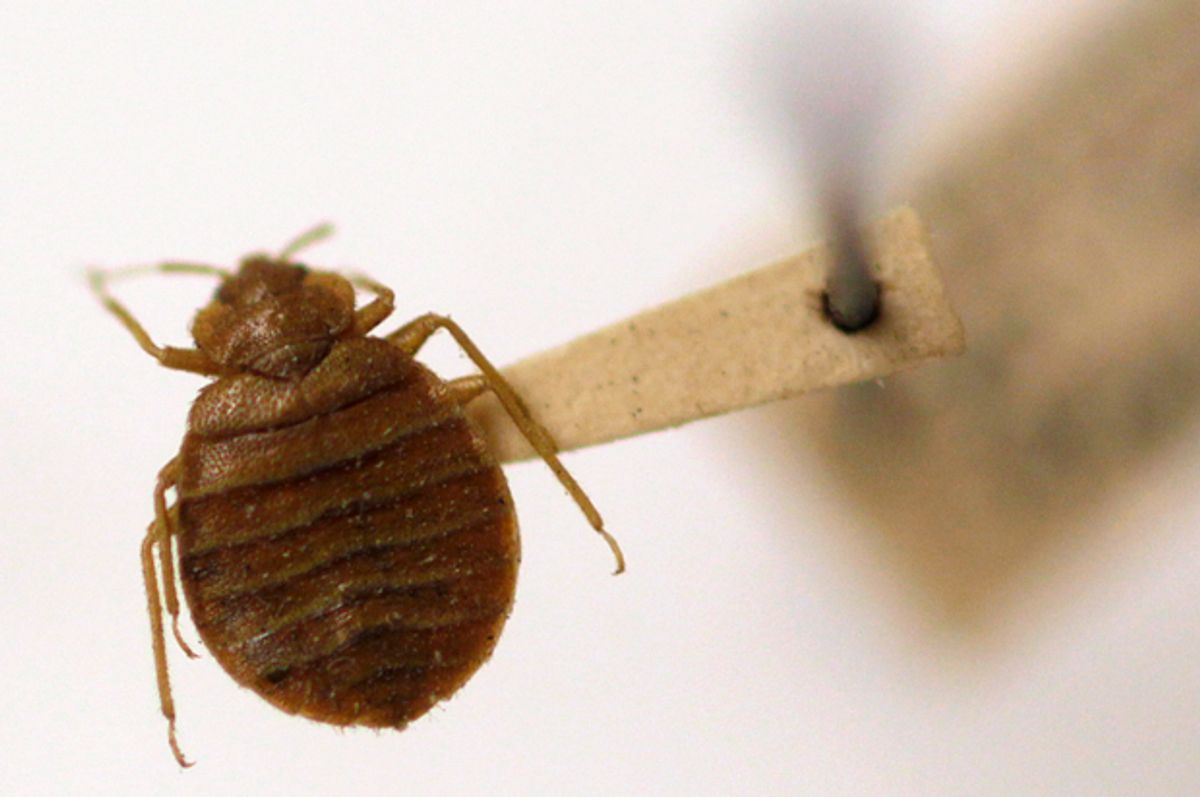 A bedbug is displayed at the Smithsonian Institution National Museum of Natural History in Washington. (AP/Carolyn Kaster)
--

A Long Island man made headlines this week after he doused his rental car in rubbing alcohol and lit a cigarette -- causing a massive fire and nearly killing himself in the process.

He was trying to get rid of bedbugs. Or, as science writer Brooke Borel describes them, you bastards.

And he's in good company. As Borel describes in her fascinating new book, "Infested," reports abound of people setting fire to their apartments, of people accidentally poisoning themselves with chemicals and pesticides meant to be used outdoors, and all other disasters -- going back millennia -- borne of the infected's desire to "kill them, and by whatever means possible." The alternative can be even uglier: the medical literature contains at least one case of a woman with a history of mental health problems who, after suffering multiple infestations of bedbugs, jumped to her death.

Salon spoke with Borel about why, despite our best (and, often, worst) efforts, the bedbug isn't going anywhere -- and what, knowing that, we're supposed to do next. Our conversation has been lightly edited for clarity.

I had no idea before reading your book that we had come so close so recently to wiping the bedbug out. How do we account for its major resurgence in the past decade?

It’s not known 100 percent for sure --and some people are curious why this didn’t happen sooner -- but it seems like it's a combination of several things. First of all, the reason we were able to lower their numbers so much after World War II is because of the advent of DDT and other synthetic insecticides -- insects had never experienced anything like this before, so we were able to wipe them out pretty successfully then. But of course, when you are putting a lot of pressure on any species, whether nature is doing it or we are doing it artificially through something like chemicals, evolution is going to happen. It’s totally inevitable.

So we are finding these pockets of DDT-resistant bedbugs all over the world. The thought is those pockets existed for a long time and were getting worse overseas after DDT was banned for use here, because we were still manufacturing it until the '80s and exporting it to other parts of the world, and of course it was still being manufactured in other parts of the world. Then in the '80s and '90s, partly because of deregulation of airlines here in the U.S. and the international treaties that followed that, it just got cheaper to fly. So people were traveling more, potentially spreading bedbugs from these hot spots just to other parts of the world that they hadn’t been to in a long time.

The other thing that happened during that period is that our population grew considerably, and a lot larger percentage of the population live in cities now. Bedbugs spread much more easily in a city, if you think of an apartment building versus a stand-alone home, it’s much easier for the bedbugs to go from one person’s home to the next because they just have to go through the walls or across the hall.

So probably a combination of all these things happened. And the fact that bedbugs are resistant to DDT is also playing out because even though we don’t use DDT anymore, the main class of insecticides that we’re allowed to use legally in our bedrooms -- pyrethroids -- work in a very similar fashion in the nervous system for the insects, so the insects that already have these genetic mutations that make them resistant to DDT also make them resistant to pyrethroids. And then on top of them, they’ve developed all of these other resistances to pyrethroid as well. There’s more of them, we spread them around more, and they’re hard to kill.

If even DDT can’t completely knock them out, it's hard to imagine how bad a poison would have to be.

There were attempts to wipe out mosquitoes on a small island off the coast of Italy way back in the ‘40s or ‘50s and even in that small contained land, it was impossible because of evolution. Resistance will always build. It’s more of a control thing rather than an eradication thing.

What becomes really important is when you talk about this kind of desperation among people for a miracle cure, and these companies selling a promise that can’t be kept. You go into a lot of the ways in which we, in trying to get rid of bedbugs, end up causing more harm.

There are some people out there who are certainly trying to help people in good faith, but there are a lot of companies who use misleading advertising and have false claims. There are even a couple of companies that got sued by the Federal Trade Commission for false claims on these all natural sprays that don’t seem to do very much. I think that there is an attempt, whether intentional or not, to tap into that fear and profit off of it.

What are some of the specific tactics that people trying to get rid of bedbugs have taken that could end up not being effective or fueling more resistance?

As far as fueling the resistance goes, just continuing to throw pyrethroids at them probably is not going to help things at all. There are some other chemicals that people can use now. There is a combination of pyrethroids and neonicotinoids that of course have been in the news a lot in recent years for their use in agriculture. But usually pest controllers or exterminators will go in with a bunch of different tactics and hope that the combination of them works. It will be not just the spraying of chemicals, but usually you have to do all of your laundry, washing it on high heat and drying it in the dryer on high, because heat kills the bugs. There are other combinations of cleaning and vacuuming and after you do all of that, putting it in plastic containers to keep the bedbugs from spreading elsewhere. There are a ton of products out there that are used all together in an actual legitimate bedbug cleanup attempt. Any time someone tries to do it themselves and they go and buy these products over the counter with things that say “kill on contact,” that probably isn’t going to exacerbate the resistance problem, but they’re probably not going to get rid of their bedbugs that way.

Or you have people who end up setting their homes on fire.

And that’s a whole other thing, too. Yeah. Spraying alcohol and then lighting a cigarette or whatever. There have been all kinds of cases of people lighting their houses on fire. Heat does kill the bugs and there are heating systems that professionals use -- which also has started this entire area of insurance because those mess up, too -- but people learn about that and decide they’re just going to put a space heater in their house, put it on high and hope for the best, and then that ends up burning down their house. I mean, they get really quite desperate.

It’s interesting when you get into the psychological fear and disgust we have with bedbugs compared to how much we know about what harm they can actually cause -- obviously no one wants to wake up with bites all over their bodies, but are there any significant physical health concerns?

Most of the health concerns at this point have to do with mental health. Bedbugs certainly can put people who don’t have known problems with mental health into anxious states or whatnot. People who already have diagnosed problems, especially people with anxiety disorders, depression or that kind of stuff -- bedbugs can really push them over the edge even more. So that’s always a concern. As far as other health concerns go, bedbugs aren’t known to be a vector of any disease. I talk about that extensively in the book -- about all the different viruses and all kinds of other infectious agents that we’ve tried to see if bedbugs can carry from one person to another, and nothing has been proven.

There was a recent study where researchers from University of Pennsylvania found that bedbugs were able to spread Chagas disease in mice. So there still needs to be a lot of research to know if that’s the case for humans and, specifically, in the situation of a person’s living space is different than in the lab. But a lot more research needs to be done to figure out whether they spread disease.

I completely believe that. I had a mouse in my apartment and I had a similar experience. With that in mind, do you think they’re being taken seriously enough? Is there enough research dedicated to what’s going on? There’s not too much government funding going into what to do about bedbugs...

The irony is because they aren’t known vectors for disease, there isn’t really much money. The vast majority of bedbugs research actually ends up getting funded by private companies who are trying to do research on their insecticides or whatever, and then some of that money will go to funding other research, maybe. But most of the government agencies kind of pass. They’re like, "Oh, they’re not our responsibility. It’s that group that should be be doing it. It’s that one." That might be changing a little but because they aren’t a larger disease threat like, say, mosquitoes as a vector for disease, there’s just not much focus on them.

It seems like almost some of those industries could be more a threat than the bedbugs themselves.

It depends. The companies I’m talking about are like the big chemical companies who are just trying to figure out if they have any chemicals that they’ve already gotten through approval that might be effective against bedbugs. They have their own set of issues, but it’s the companies that are sort of peddling these snake oils that I would I worry about even more, really. They’re kind of draining people dry and selling bad products.

"Infested: How the Bed Bug Infiltrated Our Bedrooms and Took Over the World" is published by the University of Chicago Press with additional support from the Alfred P. Sloan Foundation.