Don't hide from your family slave-owning past, Ben Affleck! 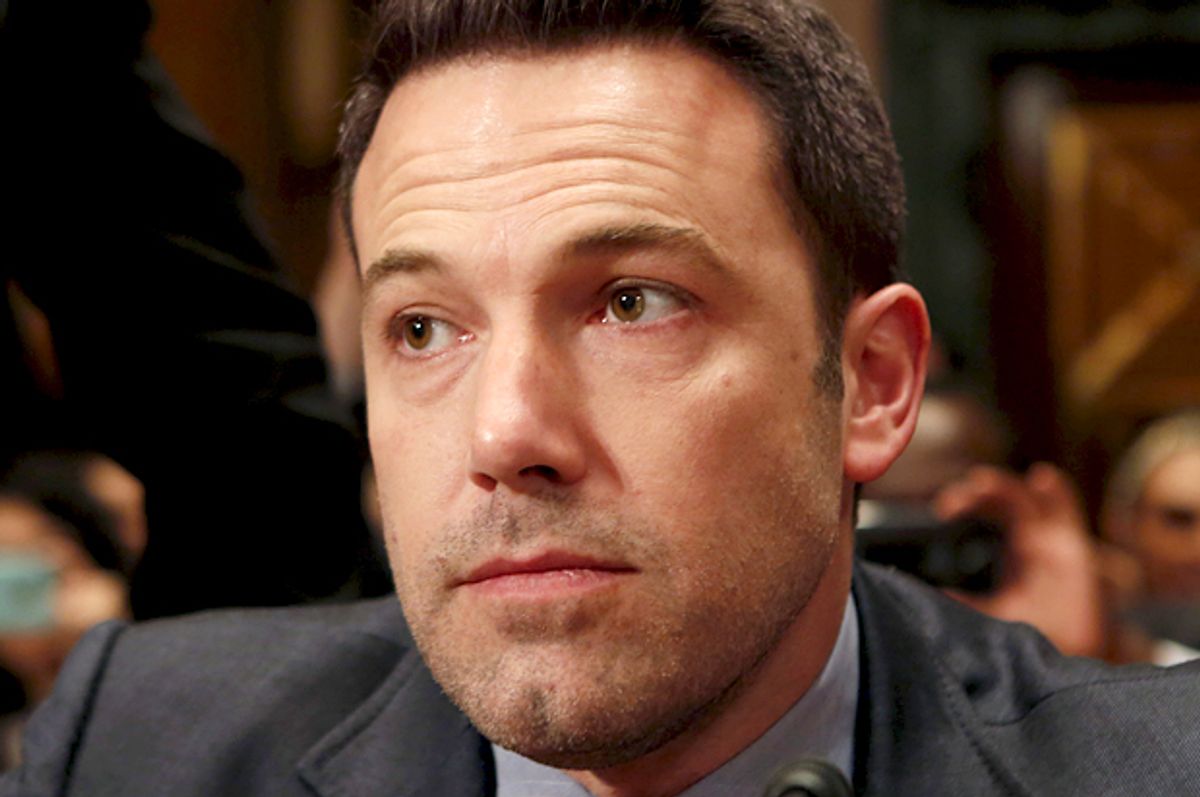 Calm down, Ben Affleck. Nobody's asking for reparations. So why, then, when the Oscar winning actor and director allegedly attempt to conceal a slave-owning side of his family history?

In the latest revelation from the jackpot of embarrassment that is the Sony hacking scandal, Wikileaks has uncovered that in an email exchange from July of 2014, the "Gone Girl" star apparently wanted to make his roots disappear. Affleck had done a segment of Henry Louis Gates' acclaimed PBS series "Finding Your Roots," but in an email to Sony chief Michael Lynton, Gates reportedly said, "For the first time, one of our guests has asked us to edit out something about one of his ancestors — the fact that he owned slaves." He went on to note, "Now, four or five of our guests this season descend from slave owners, including Ken Burns…. Now Anderson Cooper's ancestor was a real s.o.b.; one of his slaves actually murdered him. Of course, the slave was promptly hanged. And Anderson didn't miss a beat about that." In contrast, the unnamed "megastar," whose ancestor "wasn't even a bad guy," seems to have preferred to keep that skeleton in the family closet. And Gates added, "We’ve never had anyone ever try to censor or edit what we found. What do we do?… To do this would be a violation of PBS rules, actually, even for Batman."

Lynton suggested he yield to Batman, replying, "I would take it out if no one knows, but if it gets out that you are editing the material based on this kind of sensitivity then it gets tricky. Again, all things being equal I would definitely take it out." And in a statement late last week,  Gates stood by the ultimate decision, saying, "We are very grateful to all of our guests for allowing us into their personal lives and have told hundreds of stories in this series including many about slave ancestors — never shying away from chapters of a family’s past that might be unpleasant. Ultimately, I maintain editorial control on all of my projects and, with my producers, decide what will make for the most compelling program. In the case of Mr. Affleck — we focused on what we felt were the most interesting aspects of his ancestry—including a Revolutionary War ancestor, a 3rd great–grandfather who was an occult enthusiast, and his mother who marched for Civil Rights during the Freedom Summer of 1964." PBS added, "The range and depth of the stories on 'Finding Your Roots' speak for themselves."

When you're shooting a lot of material, of course you have to make editorial choices. It may well be that Gates and company simply decided that Affleck's slave-owning relative wasn't a compelling enough figure to include. It is, however, still pretty ridiculous that Affleck, Mr. Eastern Congo Initiative founder and unrepentant Democrat,  would be so seemingly spooked at people finding out someone in his family — who died long before he was conceived — would likely have made the worst Affleck Thanksgiving guest ever.

Why do we care about these things? We look for ourselves in our family — and we look for explanations of others in theirs. We watch fictional shows like "Outlander" and "Game of Thrones" — stories that regularly explore the question of whether the sins or the superpowers of one generation can be passed to another. We wonder, is blood destiny? But why? Why, especially here in the United States, where we pretend to pride ourselves so greatly on the notion of self-made identity, do we give so much power to our ancestors? Why do still permit them to reflect upon us? I can understand if the connection is recent — it must've been a horrible burden to live as Charles Manson Jr., or as the son of Bernie Madoff. You can certainly understand why, if you'd been living in the memory of the Holocaust, you wouldn't want to have the same nomenclature are your relative named Hitler. Conversely, if you're trying to get into an Ivy League school, maybe your father and mother's great achievements and prestige are a stepping stone. And there is no way in hell that a guy like Affleck, who spent most of his childhood in Massachusetts, is not familiar with the infamous "My family came over on the Mayflower; how long has your family been here?" question. But even in our knee-jerk, nonsense-fueled, blame-tastic culture, why ascribe any real connection between an ancestor — whether he was a Revolutionary War hero or a slave-owning Civil War veteran — and the person one is today?

What's unfortunate about the whole apparent whitewashing attempt is that it seems quite the opposite of what shows like "Finding Your Roots" can achieve -- a tangible, intriguing link to the past via personal experience. On this week's episode of TLC's ancestry show "Who Do You Think You Are?" actor Bill Paxton learned that a relation of his also owned slaves, and handled it just fine. "That’s unfortunate," he said. "It’s kind of disappointing from a contemporary perspective. We read this great account of this man." Of course we're all curious about where we come from. But we can't look to the past on the assumption our family tree is full of nothing but good apples, or flee when we find things that make us uncomfortable. To do so makes someone like Affleck appear, in the words of an entertainment writer friend, "a wuss." We look at our families to see connection to the past, to understand that we are part of it. Our family members were not all brilliant and noble. They fought on losing sides. They drank too much. They suffered mental illness. They died in childbirth. And yet we are here. We endure. We have family members of different races and religions and political beliefs, do-gooders and rogues, scattered across the world, and we are part of each other, connected. That is amazing. And as Bill Paxton said when he learned of his own ancestor, "Your history good and bad is your history."