"Game of Thrones" politics: Is a fair and just ruler possible for Westeros?

Sweet Tommen sits on the Iron Throne -- for now -- while Cersei, Dany and Jon Snow try on their new-found power 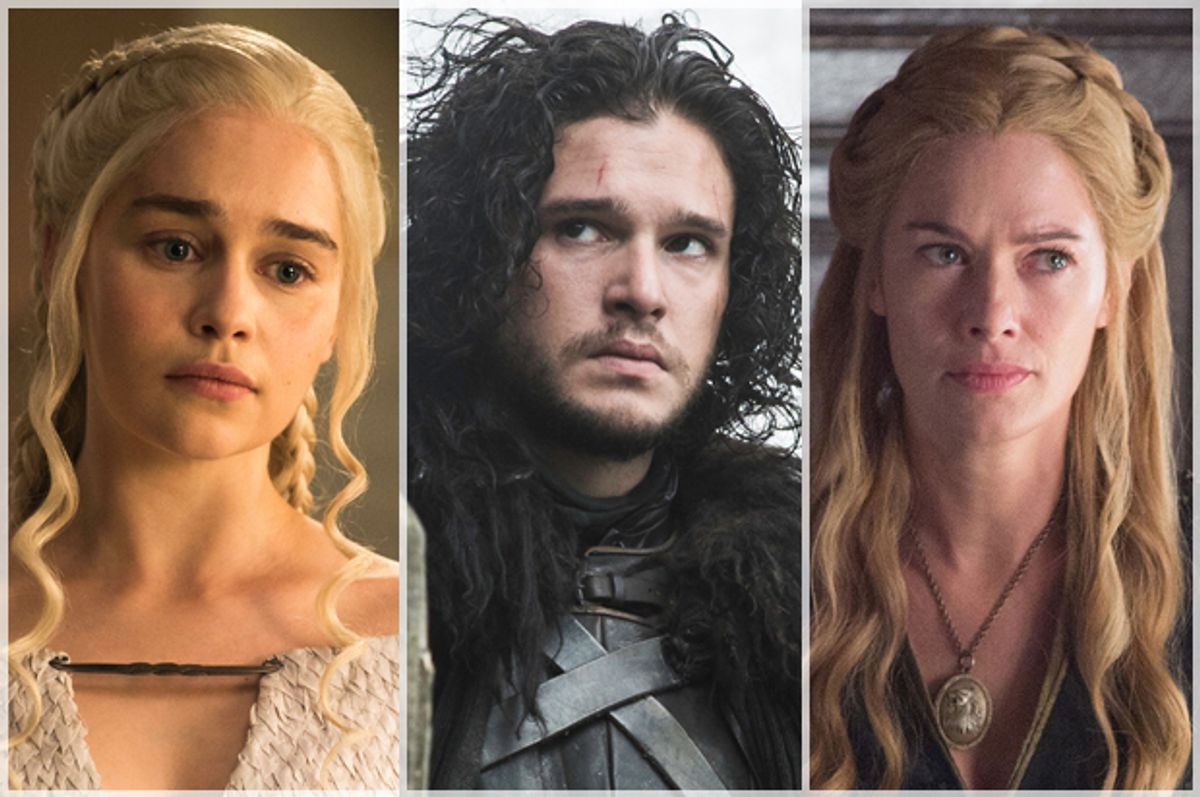 If the overriding theme of the premiere of Season 5 was regime change, and how different polities handle a sudden transformation of the power structure, the overarching theme of last night's episode was the question of a just ruler: what does one look like? How do they handle questions of war and peace, justice and punishment? How would they handle the crisis of the day?

The first person to ask this question is Varys, a man so often thought of as an arch-utilitarian who revealed himself last episode to be something of an idealist, a believer in enlightened despotism who hopes to find at the end of the road to Meereen a ruler capable ruling. Tyrion’s self-flagellation over whether he and Shae might have been happy had he not loved power so much leads him to believe that there is no difference between one ruler and the next, that “we’ve already got a ruler. Everywhere’s already got a ruler. Every pile of shit on the side of every road has someone’s banner hanging from it.” Varys insists that there are differences between princes, that Tyrion himself was “quite good, you know, at ruling during your brief tenure as Hand.” And while Tyrion insists that he mostly managed to kill a lot of people, he’s forgotten that he also managed to save the lives of the better part of a half-million people, in whose name he sallied forth to fight Stannis’ army at the Blackwater to prevent the sack of King’s Landing, while their king ran away. There are indeed differences between a just and unjust ruler.

And the question hanging in the air between Varys and Tyrion, and at the very center of this episode, is whether Daenerys is going to be that just ruler both men are looking for. And her test is the case of a captured Son of the Harpy – should she put him to death at once, as a warning to her enemies and a sign to the slaves who follow her that Dany will not leave them at the mercy of their enemies, or grant him a fair trial, thus proving to all Meereeneese that the new regime means justice? There’s not a clear-cut answer, which is what makes being a just ruler so difficult.

On the one hand, as her freedman adviser Mossador tells Dany, she is in the middle of a guerilla war that owes more to Reconstruction than Iraq. The Great Masters of Meereen “want to put a collar back on my neck – on all of our necks,” and to do it they are willing to hire a poor freeborn man, perhaps motivated by the money and perhaps by mudsill theory (as Dany speculates), to put on a mask and kill former slaves who stand up against them. Dany insists that that “there are no more slaves. There are no more Masters,” and therefore the justice that is inseparable from freedom means meting out the same punishment to a slave striking back as the murderer of an ex-slave. But as Mossador reminds her, is it truly justice to treat both sides in a civil war equally, when one side “lives in the pyramids” and the others in the streets?

On the other hand, Ser Barristan Selmy is there to remind Dany that, to embrace that side of Dany from Season 3 that saw her give the command to the Unsulllied to massacre the Good Masters of Astapor as her dragons set the city afire, runs the risk of sliding from fiery revolutionary justice into tyranny. As her own father found out:

“when the people rose in revolt against him, your father set their towns and castles aflame, he murdered sons in front of their fathers, he burnt men alive with wildfire and laughed as they screamed. And his efforts to stamp out dissent led to a rebellion that killed every Targaryen except two.”

And so Dany, taking her position in between the Great Masters of Meereen up on the walls of the city and the former slaves down below (as the agents of the Freedman’s Bureau were so often depicted), making the argument for equal treatment under the law with the execution of Mossador for the murder of a prisoner. And the result of her moderation is an alienated freedman population, a bloody riot between the ex-slaves and the ex-masters who still hate each other, and a situation even more inflamed than when she started. Sometimes, moderation doesn’t lead to the peace that Varys longs for, let alone justice.

Meanwhile back at the Wall, Jon Snow is trying to wrestle with his own understanding of what makes for a just ruler, in the wake of Stannis’ (and his) execution of Mance Rayder, who was an admitted oathbreaker and deserter. For Stannis, who last episode offered the wildings a chance for assimilation into Westerosi society along with lands and titles, the question is who the Free Folk will follow now. “One of their own,” Jon Snow offers – and in this, the Free Folk are very like their new neighbors, the Mormonts of Bear Island, who refuse to march behind the banner of anyone but a Stark. More practical and adaptable than he’s been depicted as in the past, Stannis turns from his previous project to a new proposal for a political regime that offers the chance at uniting the North (and whoever the new wildling leader is) behind “Jon Stark, Lord of Winterfell” through the legitimizing power of a king.

Yet while honor forces Jon Snow to refuse, the same question of justice – what should be done with the wildlings – drives him to stand up when his name is put forward as Lord Commander of the Night’s Watch. Here too is another political community trying to decide what makes for a just ruler – is it “a man who has fought the wildlings all his life,” who represents the Night’s Watch’s traditions and prejudices, or a man who understands that the wildlings are just people “born on the wrong side of the Wall” and can look ahead to new threats and opportunities? Like Daenerys Targaryen, whom he has often been paired against as the ice to her fire, Jon Snow is a man whose reign as Lord Commander is going to be consumed by how to incorporate another group of outcasts looking for a place in a political community that fears and hates them. Here too, justice will not be easy.

Adjoining these two portraits of just rulers perhaps in the making, are two examples of how badly injustice can affect the body politic. In the case of Dorne, Ellaria Sand (who actually eschewed this path in the books, but who is standing in for Arianne Martell) demands blood and vengeance for Oberyn Martell, even if that means the torture and murder of a helpless child – here we see injustice inflaming an entire nation, leading them to forget what Oberyn Martell stood for, that the world should be a place where “little girls” are not killed at the whims of the Great Houses.

And in the case of Cersei, we are getting the first hints of what it looks like when an unjust ruler really takes charge. With Joffrey, there was a pettiness and inattention to the actual business of governing that restricted his tyranny to those closest to him – Cersei doesn’t have that limitation. Whether it’s breaking her word to Bronn in exchange for his silence and absence during Tyrion’s trial, or refusing to punish murderers lest that disincentivize future murderers from executing dwarves in the hopes that one of them might be Tyrion, the stain of injustice is creeping inexorably over the royal court.

Nowhere is that more evident than in the Small Council room, where Cersei rules without a Hand to check her, handing out appointments as Master of Coin to the hapless Mace Tyrell (on the grounds that this would keep her enemies out of the Handship) and as Master of Whisperers to confessed necromancer (and Westeros’ answer to Dr. Mengele) Qyburn, for no other reason than he is loyal. When loyalty replaces ability or morality as justifications for royal office, corruption has overwhelmed the government. Gods save the realm when Cersei is the arbiter of justice.