Daenerys tries to outrun her Targaryen past to mixed results, while the Stark girls continue their separate flights 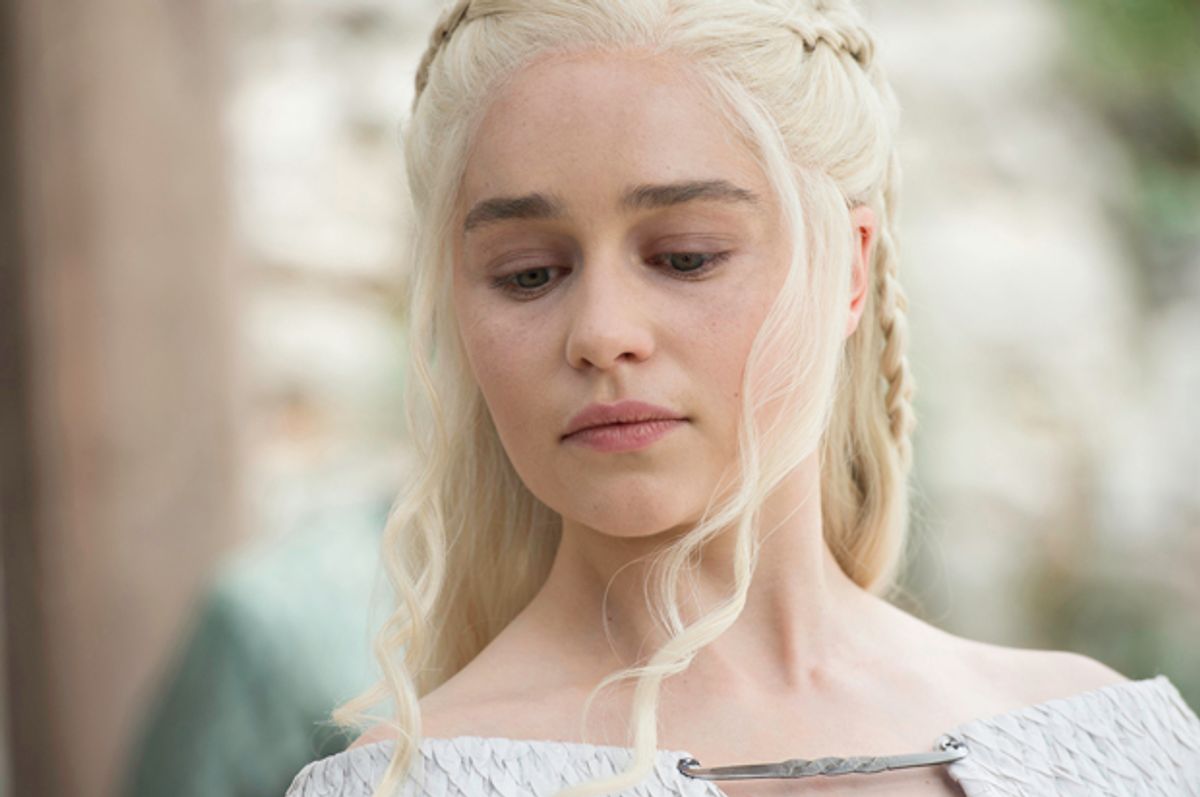 For as much wisdom is contained within the famous quote, “Those who cannot remember the past are condemned to repeat it,” it really holds very little relevance within the universe of “Game of Thrones” because there’s little chance of anyone forgetting the (often) bloody path that lead them to the place they reside now. This seems particularly true for the show’s women, most of whom seem locked in a constant conversation with the past, a fact that “The House of Black and White” never lets them forget.

Brienne, traversing the countryside with Podrick, has been bound for ages by her vow to Catelyn Stark that she would find and protect Sansa and Arya. Though Arya rejected her involvement outright, this episode has Brienne encountering the elder Stark girl for the first time and the results are less than positive. Upon introducing herself to Sansa and Littlefinger at a countryside inn and offering her services, she is rebuffed by Sansa and insulted by Littlefinger. The latter then tries to detain Brienne and Podrick and they flee. They manage to escape, and despite Sansa’s rejection, Brienne is bound to follow her and serve as lookout from afar, knowing that being in Littlefinger’s care is far from the safest place to be. Podrick tries to convince Brienne that her oath to Catelyn has been fulfilled, having found and offered protection to both girls, but Brienne is not comfortable laying her burden down.

Cersei’s relationship with the past is somewhat different — instead of feeling beholden to it, she is desperately racing to stay ahead of it. The deaths of Tywin and Joffrey, spurring the ascension of Tommen to the throne, leave the Lannisters' position destabilized to the point where their enemies feel comfortable sending open threats. The problem, as Cersei’s rapidly learning, of ruling through fear and intimidation, is that even the slightest decrease in presence can lead to gross upheaval. Cersei has always been a quick learner, though, and she throws herself immediately into doing all she can to solidify her family’s power, leading the meetings of the small counsel during Tommen’s conspicuous absence, much to the chagrin of some of the members. But as much as Cersei may try to stay ahead of the fray, she will never be able to quell it all, particularly if she can’t keep her own house in line, something she struggles with as her uncle makes it quite clear he has no intention of taking orders from her, a mere woman.

One of the other issues that Cersei is facing, the depths of which she doesn’t yet realize, is another woman imprisoned by the past. Ellaria Sand, home again in Dorne, mourns still the death of her lover Oberyn and beseeches his brother to seek revenge against the Lannisters, particularly since they have the perfect opportunity to even the playing field in Cersei’s daughter Myrcella, currently residing in Dorne and promised to Trystane Martell. Prince Doran is underwhelmed by the suggestion and dismisses it, which only serves to enflame Ellaria more. It’s not unthinkable that Ellaria is tortured by the past. In fact, it’s only fitting, as Oberyn died in conflict trying to avenge the death of his (and Doran’s) sister Elia at the hands of the Mountain. The Martells have been spoiling for full-blown conflict with the Lannisters for ages, and the past will not be silenced so easily.

There are, however, two significant examples of women who are trying to break with the past, with varying degrees of success.

Arya finally arrives in Braavos in search of Jaqen H’ghar and makes her way to the House of Black and White. She is informed by the wizened gentleman that answers the door that there is no one there by that name, but she remains undaunted, spending day and night outside waiting for some kind of sea change, entertaining herself by flipping her coin and reciting her kill list. Eventually, though, enough is enough and she stalks to the waterfront, depositing the coin  that allowed her passage into the waters, and wanders into town. There, she is surrounded by a group of street ruffians impressed by her little sword who are scared off not by her threats of death but by the appearance of the ancient gentleman she encountered earlier behind her. She follows him back to the the House of Black and White and demands to know who he is and why the boys were frightened of him. Before her eyes he transforms back into Jaqen, who then tells her that he is no one and that in order to proceed, Arya too must become no one.

Though she consequently follows him inside, dauntless, to become no one is quite a large proposition for Arya. For such a young girl, her survival has long been inextricably tied to notions of vengeance, as though air is only worth breathing so long as there’s a chance for her to make up for the wrongs that have befallen her family. To move forward with her life in the company of the man formerly known as Jaqen H’ghar would require a clean break with the past, a choice that would seem unthinkable, yet is entered into without second thought.

But no one is struggling as much with the compromise between past and future as Daenerys is in Mereen. After Daario and Grey Worm find the Son of the Harpy loyalist responsible for killing the member of the Unsullied last episode, there is a drawn-out discussion of what sort of punishment should be meted out. While some argued that he should be given some semblance of a trial, others though his sins were worthy of immediate execution and that there was no room for mercy with regards to the fates of the former masters. Dany decided to go the more democratic route, no doubt influenced by Ser Barristan’s warnings about the “justice” her crazed father saw fit to dole out toward the end of his reign, in which much blood was spilled to punish those who dared speak against him. Dany is terrified of acting rashly and being seen as unfair, haunted by the name she wears proudly but is just as much a curse as it is crown.

Already this season we’ve seen Dany rebuked by Daario for no longer acting as the mother of dragons that her people know and love, but what Daario seems blind to is that there’s a huge gulf between conquering a people and governing them. Dany knows how to conquer and she knows how to mother, but she struggles more and more with finding the line between both of those things and also instituting justice for everyone involved. Dany understands that the way forward as a leader involves more than just inflicting her will on others, but cannot yet discern what form that type of leadership takes.

Because she decides to be lenient on the Son of the Harpy, one of her council members, a former slave, decides to take justice into his own hands and kill the suspect. Dany, not being able to afford to have such insubordination on her hands, sentences the man to death and with all of Mereen watching and most begging for leniency, has him executed. After an uncomfortably long silence, the pleas for mercy are replaced with hisses of displeasure, a turn strikes Dany dumb, before violence breaks out in the street. Though all involved are ushered to safety, Dany dismisses them and looks out over the darkened city, only to be greeted by an old friend. Drogon returns from his time abroad and Dany is relieved that her missing child is returned. But upon reaching out to touch her long, lost dragon, he sniffs her, shuns her, and flies away. In a single day, after struggling to find a way to emulsify a tortured past with an uncertain future, Dany manages to alienate those who anointed her as mhysa and her literal dragon child.

The past is an albatross and a ghost, it is lifeblood and purpose, it is inescapable. Yet without a foreseeable future, the past is often all any of the women on “Game of Thrones” can cling to — existing in a world without true agency, where their livelihoods are bartered and sold, where Cersei can’t even serve as hand of the king, where any power must be stolen like fire from the gods. Yet we’re entering a new age — or so the show would have us believe — where the path forward leads one of two ways: like Arya, you forget the past and are born anew or, like Dany, you find a way, rough going though it may be, and make peace with both the past and the future, by way of the present. Neither are great options, but Arya and Dany have always held the whole of the show’s future in their hands. If anyone can make peace with the past, it’s them.

Men also did things this episode.

Tyrion and Varys continue the “Road to Mereen” show and talk very seriously about how they like to live life outside of the box while traveling by box. Some very subtle metaphor work all around.

Jaime takes up with everyone’s favorite sellsword Bronn in order to try to sneak Myrcella out of Dorne. There’s really no way that could go wrong.

Cersei at one point refers to Margery as the “smirking whore from Highgarden” which is just a brilliant little turn of phrase.

Jon is voted the new Lord Commander of the Night’s Watch. This was slightly more involved but Jon Snow + Stannis Baratheon = too much dearth of charisma to delve into too deeply. I suspect we’ll spend more meaningful time with Lord Commander Snow next week, if that’s your jam.

Ellaria Sand has invoked the Sand Snakes. May the New Gods have mercy on us all.