GOP sociopaths are about to be exposed: How John Kasich's presidential run would reveal their callousness

Ohio's GOP governor hates "Obamacare" but embraced its Medicaid expansion, and that could roil the 2016 GOP field 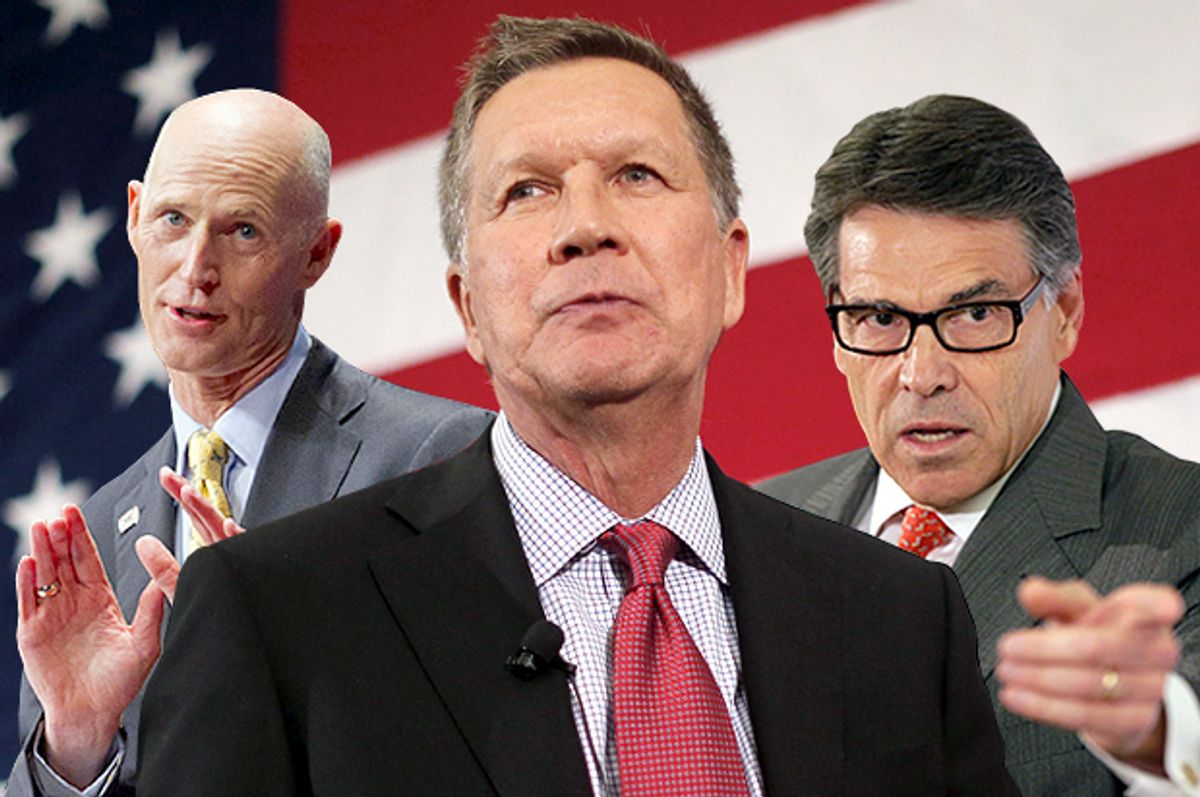 John Kasich, the Republican governor of Ohio, may or may not be running for president. He’s showing up in states like New Hampshire and South Carolina and forming PACs and doing other things one does when preparing to run for the White House, but he’s still mulling it over and waiting for God to give him the thumbs-up. I hope Kasich does run, mainly so the Republicans can have a knock-down, drag-out fight over Obamacare.

What sets Kasich apart from other 2016 aspirants is that he actually supports one of the most important pieces of the Affordable Care Act: the expansion of Medicaid. In fact, Kasich was so gung-ho about expanding Medicaid in Ohio that when the state legislature resisted him, he pushed the expansion through via the state’s Controlling Board, leading Republican critics to gripe that he’d broken the law. Kasich was no fan of the Affordable Care Act, but he argued at the time that it was Ohio’s duty to “get the most out of [the ACA] as possible,” and that meant opening Ohio’s doors to lots of new federal spending that would boost health coverage for low-income residents.

Of course, if you ask Kasich what he’d do about Obamacare as president, he’ll tell you the same thing every other Republican candidate says: he’d repeal every word of it on day one. But Kasich also argues that the expansion of Medicaid made possible by the Affordable Care Act would somehow survive the law’s complete and total repeal. He said as much this past weekend at the Republican 2016 cattle call in New Hampshire this past weekend. “Kasich insisted he would leave the Medicaid expansion intact, saying that’s a separate issue,” the Columbus Dispatch reported.

Kasich has been arguing for a while that the Medicaid expansion and Obamacare are two separate things. That doesn’t make any sense, and it’s contradicted by what Kasich himself has said in the past, but being a Republican with national ambitions means you have to present yourself as an implacable foe of the ACA, even as your state benefits from the law.

And the fact that Ohio is benefitting from Kasich’s embrace of Obamacare – even if he’s contorting himself to avoid describing it as such – is why he absolutely should run for the Republican nomination. There have been a lot of positive changes wrought by the expansion in Ohio to which Kasich can and should point on the stump -- and that will wreak havoc among the other Republican candidates.

Embracing expanded Medicaid instantly made over 500,000 Ohioans eligible for coverage, and as of last June, close to 300,000 had signed up. By opening up that access to healthcare, instances of uncompensated and charity care at Ohio hospitals have plummeted – hospitals in Franklin County say charity care is “on pace to decline by more than half this fiscal year compared with last year,” while the Cleveland Clinic reported a 40-percent drop in charity care. The uninsured rate statewide has plummeted since 2013, in keeping with the trend observed in other pro-expansion states.

And the people who’ve gained coverage through the expansion are using to get much-needed care. Here’s what the Columbus Dispatch reported last month:

Many new beneficiaries are gaining coverage for the first time. Most of them needed to see a doctor. For many, it was urgent.

More than 24,000 new enrollees are being treated for cancer. Forty-two percent of new enrollees have been diagnosed with a mental illness or addiction. Three-fourths have a chronic condition.

Kasich has been framing the expansion and its salutary impact as a moral imperative and part of the Christian mission to give aid and comfort to the poor. And that puts the other 2016 Republican wannabes in a tough spot – the candidates from Florida and Texas, especially.

It’s one thing to bash the ACA as an ideological exercise and a chest-thumping demonstration of your opposition to “big government.” It’s quite another to be confronted with the practical successes of the Medicaid expansion in states like Ohio and still argue that unwavering resistance to the ACA is in the best interest of the state you represent. Marco Rubio, Jeb Bush, Ted Cruz, and Rick Perry all oppose expanding Medicaid, and all four either represent or have recently represented the two states with the largest numbers of residents in the so-called Medicaid coverage gap – people who make too much money for traditional Medicaid but not enough to qualify for tax credits to buy insurance. That’s about 1.6 million people spread across Texas and Florida who are being denied access to healthcare because of ideological resistance to the ACA.

John Kasich also opposes the ACA on ideological grounds, but he seized on an important piece of the law because it would do good things for the low-income people in his state. Sure, it’s inconsistent – but it’s also good policy. And I’m looking forward to seeing what happens when he lays out all the practical benefits the Medicaid expansion has brought to Ohio and then looks at the other GOP candidates and asks: “What have you done?”