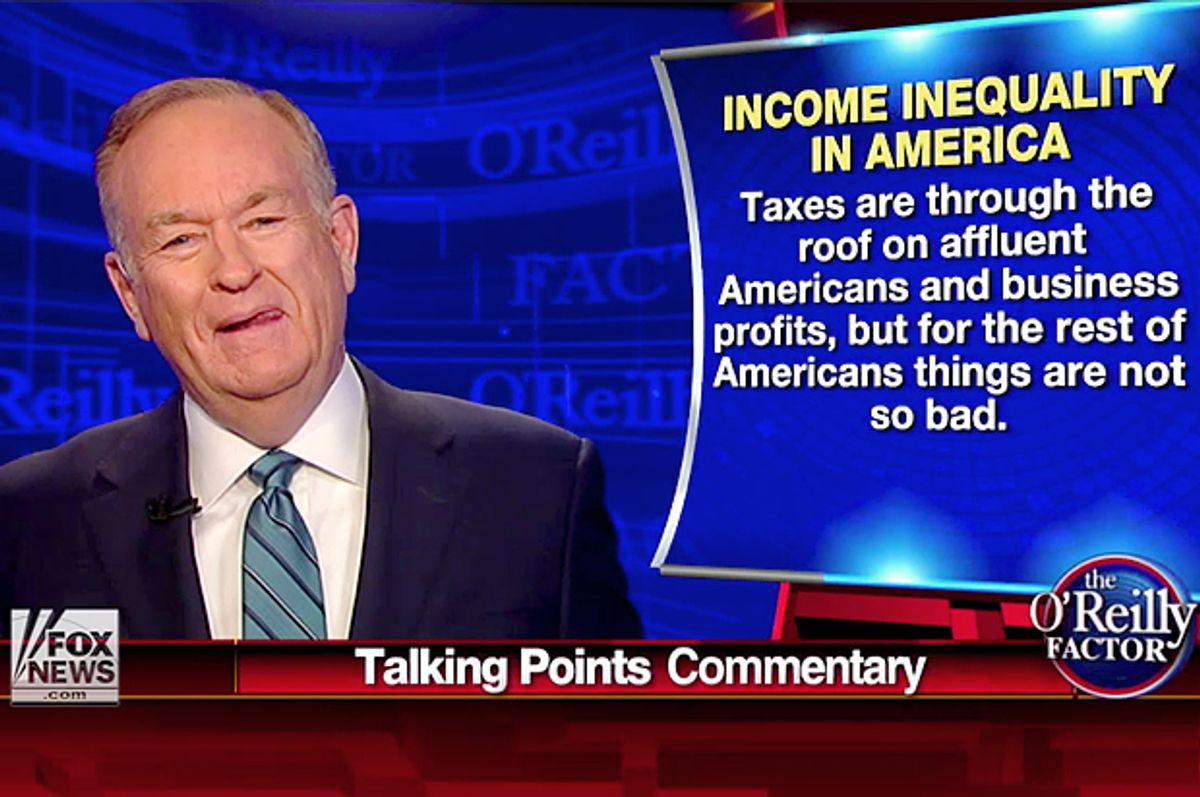 It’s pat at this point to observe that income inequality will be a defining issue of the 2016 race. Everyone is wondering just how far Hillary Clinton will shift to the left on economic policy to keep the Elizabeth Warren wing of the Democratic Party from revolting, and Republicans are paying lip service to the problem while pushing the policies that exacerbated it in the first place.

Sensing this rising concern over income inequality among the 2016 candidates, Fox News’ Bill O’Reilly stumbled dewlap-first into the issue last night and offered his take on the state of the American economy. And, as is his wont, he got almost everything completely wrong. To Bill O’Reilly, the real inequality is found in the government’s unfair taxation of wealthy people like himself.

Let’s break down Bill-O’s treatment of income inequality piece by piece to get a better handle on just how thoroughly bad his analysis was.

O’REILLY: This year 2015 the feds will gather more tax dollars than ever before in the history of the U.S.A. -- about $3 trillion. That's because since taking office, President Obama has proposed a whopping 442 tax increases. Not counting 20 others associated with Obamacare.

Has Obama really proposed 442 tax increases? Nope. Not even close. It’s a bogus talking point that Grover Norquist’s anti-tax group manufactured, and they arrived at that number through vigorous double-counting and by throwing in a bunch of things that aren’t actually tax increases. More to the point, the mere act of proposing a tax increase does not actually increase taxes or raise revenues. According to the Congressional Budget Office, tax revenues in 2015 are going up in part because certain business tax breaks are expiring, but also because the economy is growing, and more jobs means more taxable income.

O’REILLY: As you may know, Americans earning more than $400,000 a year must pay close to 40 percent of their income to the feds; Social Security taxes increased from 4.2 to 6.2 percent -- all workers pay that; and itemized deductions which can bring tax bills down, now being phased out for high wage earners and profitable businesses.

The takeaway from this is that Bill O’Reilly doesn’t appear to understand how marginal tax rates work. In 2014, any single filer who made more than $406,750 in income was subject to the top marginal rate of 39.6 percent. This does not mean they paid “close to 40 percent of their income to the feds,” as O’Reilly claims. It means they paid close to 40 percent of every dollar over $406,750. Every dollar below that threshold was taxed at the lower marginal rates. So a single filer who made exactly $406,751 in 2014 actually paid about 29 percent of her income in federal taxes. This is very basic stuff that O’Reilly probably should have boned up on before stumbling into the income inequality debate.

This swirl of incomprehensible yammering about taxes leads to Bill’s thesis on income inequality in America: the rich have it rough, while everyone else is doing okay.

O’REILLY: So you can see, you have to be able to see that taxes are everywhere on affluent Americans and business profits. But, for the rest of Americans, they aren't so bad. Bottom 60 percent of wage earners pay just 2.7 percent of all federal income taxes. The bottom 40 percent actually get money from the feds they receive payments called earned income tax credits.

Ah, the lucky duckies who get their tax credits and don’t know the pain of paying taxes on sky-high incomes and capital gains. Of course, focusing solely on federal income taxes ignores the regressive consumption taxes that hit the poor the hardest. Those taxes are paid by everybody, even people who don’t work and are thus ineligible for the Earned Income Tax Credit. And one might be a little more sympathetic to the plight of the affluent if they weren’t able to exploit loopholes and various other tricks within the tax code to lower their effective tax rates to be roughly equal to – or lower than – someone making far less.

But O’Reilly knows he’s right about the suffering of the rich in America, as proven by the sad, sad story of Bill O’Reilly’s slightly less robust investment portfolio. “According to financial analyst Alexander Green, who works for the Oxford Club, the tax burden on business investors drives down job creation and economic expansion,” O’Reilly observed. “I believe that because I have cut back investing due to the heavy capital gains hit. Why should I risk my money?”

After laying out this completely backwards vision of income inequality in America, O’Reilly turned to economist Austan Goolsbee and asked him to grade his economic dissertation. Goolsbee, in a fit of inexplicable generosity, gave O’Reilly a D.

O’Reilly, in characteristic fashion, gave himself an A.