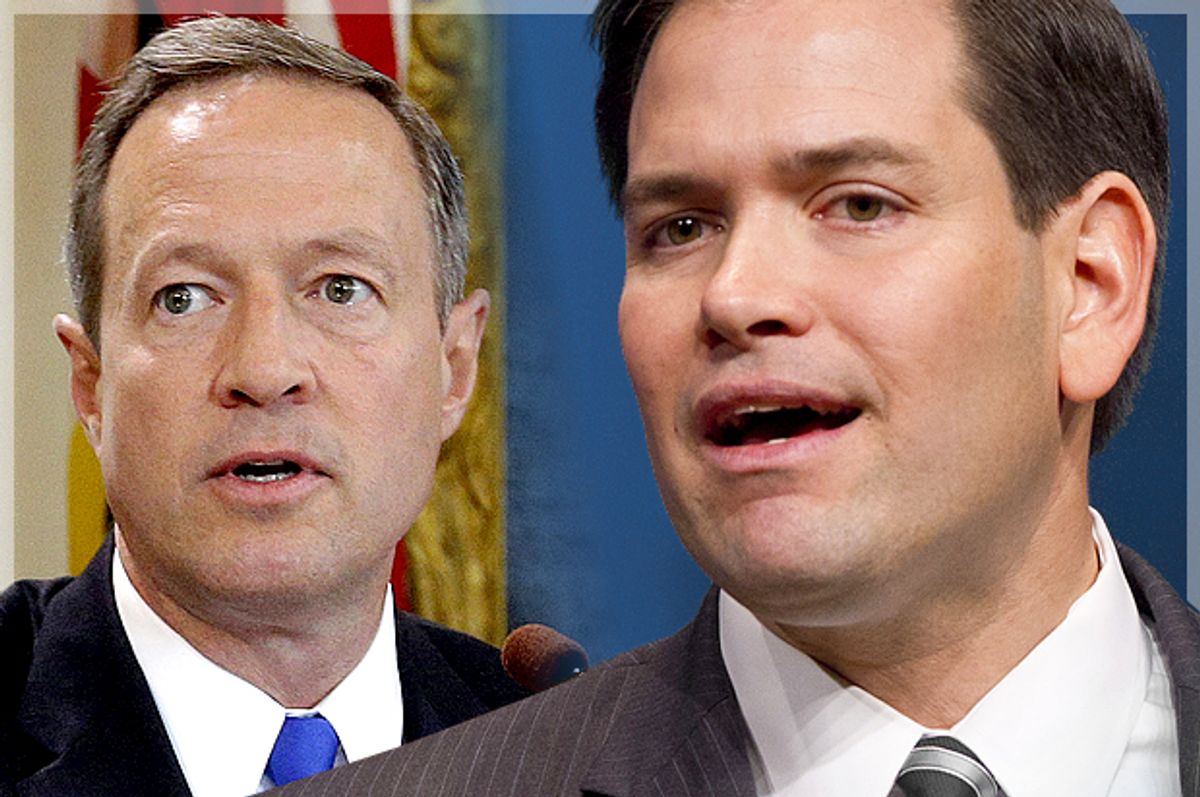 As someone who curses quite a bit in my professional life, I was encouraged to hear that former Maryland Gov. Martin O’Malley had – on NPR, of all places – referred to Marco Rubio’s economic worldview as “bullshit.” The interview was interesting for other, better reasons, and it was actually fairly rich in policy detail, which I’ll get into in a moment, but I do want to carve out a special appreciation for the act of going on public radio as a potential candidate for the nation's highest office and letting rip with a little salty language.

O’Malley’s people are presenting it as a spontaneous moment of real-keeping and are actually fundraising off of “bullshit,” which is itself a wry commentary on the subject matter of a typical fundraising email. And because I want the rest of the world to sink to my level, it’s my fervent hope that O’Malley has touched off something of a linguistic race-to-the-bottom and now we’ll see Hillary Clinton tell Wolf Blitzer that Ted Cruz’s tax plan is a “turd waffle,” or something similarly juvenile.

But what I like most about O’Malley dismissing Rubio’s economic outlook as “bullshit” is that he’s not wrong. NPR’s Steve Inskeep had asked O’Malley about Rubio’s views on how regulations on businesses impact upward mobility, which Rubio had laid out in an NPR interview a week earlier. In that interview, Rubio tried making a populist case for deregulation, arguing that regulations only serve to stack the deck in favor of banks and large corporations. “The fact is that big government helps the people who have made it,” Rubio said. “If you can afford to hire an army of lawyers, lobbyists and others to help you navigate and sometimes influence the law, you'll benefit. And so that's why you see big banks, big companies, keep winning. And everybody else is stuck and being left behind.”

That’s complete, well, “bullshit.” Republicans like Marco Rubio evangelize deregulation not because it’ll give a leg up to the little guy, but because that’s exactly what banks and big businesses (and the wealthy political donors who run them) prefer as a policy outcome. There’s a rich historical record of deregulation broadening the gap between the wealthy and the non-wealthy, and someone who argues otherwise is, in fact, bullshitting you.

My only quibble with O’Malley’s diagnosis of the situation is that he didn’t expand it beyond Marco Rubio’s views on deregulation. Rubio’s tax plan is a steaming pile of bullshit that rewards the nation’s wealthiest with a slew of insanely generous tax cuts that would blow a multi-trillion-dollar hole in the budget – the same budget that he promises to balance while raising defense spending and not making any significant cuts to Medicare or Social Security. Expand the zone, Martin.

As for the policy portions of the interview, there was some good stuff to be had. O’Malley repeated his call to expand Social Security benefits and recommended a three-part course of action for realizing that goal: boosting wages through legislative action, raising payroll taxes on high earners, and pushing immigration reform through to get more people paying into the system. Notably, O’Malley signed on to a “donut hole” approach to the payroll tax cap: adjusting it so that wealthy earners pay more while the middle class’ tax burden remains unchanged.

The Social Security fight represents a big opportunity for the Democrats to make the case for government action in improving the average person’s economic situation, and it’s a strong contrast point to make with the 2016 Republicans, given that almost all of them favor cutting the popular program in some way. At the moment, O’Malley’s is taking better advantage of that opportunity than Hillary. He’s actively making a case for strengthening the program and using it as a rebuttal to the Republican economic agenda. Hillary is being more cautious, saying only that she’ll oppose the GOP’s efforts to privatize or otherwise weaken Social Security, while refusing to say what policies she’d support. Yesterday at a campaign event in New Hampshire she said that we should “figure out what works and how we build on what works and let’s not get into arguments about ideology and rhetorical attacks and claims.”

Really? A presidential campaign seems like a great time to get into ideological arguments. It’s actually the ideal time to get out there and make the case that your policies work and the other guy’s worldview is “bullshit.” At least one 2016 Democrat is doing that.