"I am not supposed to be alone. I am one of a pair"

I gave birth to two girls, but only one survived. As I watch my daughter grow, I struggle to mourn the twin I lost 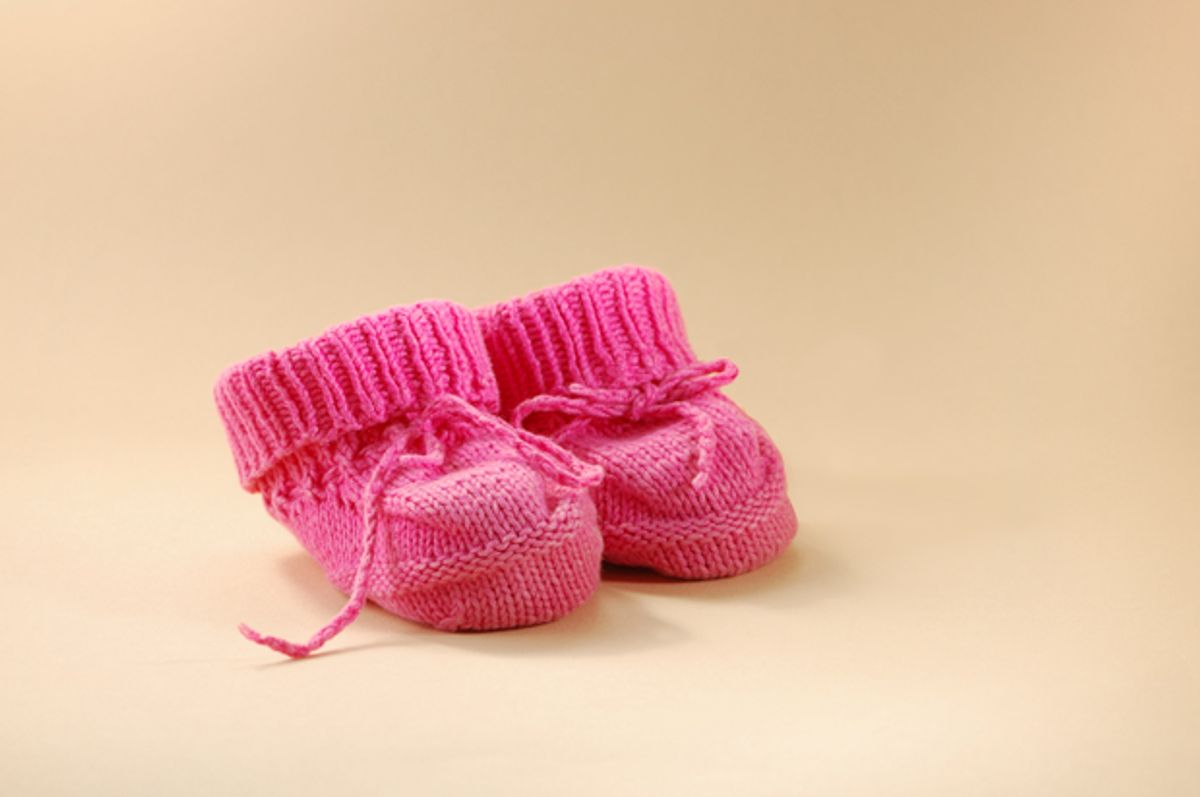 There is a dance I do when I talk about my daughters, never sure where to rest between the “are” and the “were,” the “have” and the “had.”

It is a semantic cha-cha made necessary by the fact that my daughter Haven is now a bright-eyed toddler and that her twin sister, Gideon, died when they were 19 days old.  I have two daughters. I had two daughters.

Even now I wonder if it’s possible for my living daughter to be identical to someone who is no longer alive, but I find myself insisting upon the term. I know it’s a sad vanity. In loss support groups, I cringe a little every time I hear myself hit the word "identical" a little too hard. It should not matter.

Most people only have one day on which they were conceived. Two cells meeting in the dark halls of their mother’s body. It’s strange to think that all of us, every person who has ever taken a breath, or won a Nobel Prize or committed mass murder is connected by a chain of days to that first day in the warm scarlet recesses of someone else’s body.

But for identical twins there are two days of conception.

There is the ordinary miracle. The spark of life that ignites for all of us. And then there is the day of the split, a few days down the chain of natal life, when for some unknown reason the clump of cells holding all the instructions for an individual is drawn by some force to pull away from itself.  A division that creates two sparks where before there had only been one.

This moment has neither mother nor father. No scientist has discovered the reason for twinning. It cannot be duplicated in a lab.

From the moment the nurse practitioner revealed there were two babies, little clouds on the night sky of my ultrasound, I wondered about the moment one became two. I wracked my brain to figure out which particular jostle of my body had caused those cells to spin away from each other. I tried to pinpoint the moment.

Now, I try to pinpoint the moment eight months later when a section of my daughters’ shared placenta tore away from the wall of my uterus. There was no dramatic fall or car crash. No pain to signal a warning. Instead the abruption went undiscovered for days, alternately bleeding and clotting inside me while I picked up my son from school, while I searched for zippered pajamas at the Goodwill, while I texted my brothers pictures of my swollen ankles. Those days now seem like the cheapest kind of horror show. My daughters both tethered to the same sinking ship, while I blithely sift through racks of tiny pink clothing.

There were three days after they were born when we believed all would be OK. They were small but lovely, dark-eyed with dancers’ toes. Identical chins. Identical noses. Identical caps of downy black hair. Gideon and Haven. I sat with their father by their isolettes, talking about the good fortune of steroid shots and the wonders of modern medicine. Friends emailed stories of all the thriving preemies in their lives.

On the third day I entered the NICU to find rolling privacy screens surrounding Gideon’s crib. A stop sign, just as large and red as the ones in the street, hung from the dividers. They had found a clot in Giddy’s liver. The jargon and diagnoses cascaded in over the following days: NEC, renal failure, subdural brain bleeds. Giddy was transferred to a children’s hospital better equipped to deal with the problems presented by 3-pound patients while Haven stayed behind.

The small bracelets I'd had made with their names now seemed a cruel joke. There would be no misidentifying them. In one hospital Haven’s skin was red and moist in the tropics of her isolette. In the other Giddy’s skin was orange and puffy, “edematous” in the poetry of doctors speak, a casualty of her barely operating liver. I slipped Haven’s bracelet around Giddy’s ankle, placed her photograph inside her isolette. “This is my sister Haha on our birthday,” my husband wrote on the picture. A message to the nurses and doctors, its subtext what we were unable to say: “I am not supposed to be alone. I am one of a pair.”

Three days before Gideon died,  a doctor we had not yet met chased after us as we were leaving the NICU.

The doctor was African. A beautiful man with large eyes.

“Mrs. Foley,” he said. His accent was musical, proper.  “May I talk to you? I am concerned about Gideon.”

Her name was even more musical with his voice. Gi-De-Ann.

He continued, “There is a time when families must ask … they must say, ‘Is what we are fighting for, is it enough to keep on? Has too much damage been done? You must ask can this child love? Can this child know that she is loved?”

It was such a simple question. Such a small threshold.

I had been concerned with survival. About brain bleeds and liver functions. Working limbs and ears and mouth. Lungs. Kidneys. Intestines.

Can she love? Can she know she is loved?

The doctor’s face was still. His eyes clear and serious. But real tears were breaking from them. He did not wipe them away but let them roll unobstructed to his jaw.

I loved him for those tears. This beautiful stranger who was crying for my daughter, who had given me the truth of our loss.

Can she love? Can she know that she is loved?

He would not have asked the question if the answer had been yes.

Giddy died on a Thursday. Though on her autopsy her time of death is 10:32 p.m., she died some time before that. She died in my arms. She died in her father’s arms. She died next to us on the bed. Yet another moment for me to try to pinpoint.

We are not sure where exactly it happened, because they turned off the monitors. The chimes and beeps and alarms that had been the soundtrack to Giddy’s short life were finally silent. The quiet whoosh of the medication depressors and breathing machine clicked off. The only line remaining was her fentanyl drip to keep her from being in pain.

It was the first time I saw her little mouth unobstructed by tubes. It was so red. A lipstick rouge instead of a babyish rosebud. And though it was unusual, I thought it was beautiful.

After the nurse came in and confirmed what we already knew, we did not linger. We kissed Gideon’s cooling forehead and left, driving the 40 minutes to her twin sister’s hospital.

There, waiting for us by Haven’s bed was the emotional cliff of the “at least.”  At least we still had a baby. At least we had no more than most people: There was a pregnancy, now there is a baby. How lucky for us.

Now, a year after my daughter’s death, I still have dark remnants of the thoughts that haunted me before the girls were born. An occupational hazard of mothering an infant is time spent in the quiet. While I rock Haven to sleep, I am visited by Gideon's ghost in the form of questions. How would I have handled that diaper change if she were still here? What if one of them refused to sleep? What would I have done?

I have made peace with the fact that these questions will come for the rest of our lives, delivering bitter sweetness to Haven's milestones. What would their first day of kindergarten have been like? Driving them to homecoming? What would they have looked like as bridesmaids at my son’s wedding? As brides at their own?

I suppose I should make friends with the questions. They are not going away, and in truth I do not want them to.

Every day I hold a child who is an exact replica of the one I lost. I know what Gideon would have looked like, I can imagine the weight of her body in my arms. Because my own brothers are identical twins, I know that the girls would likely have been as different as chalk and cheese, but I will never get to find out. There is no knowing who Gideon would have been, only what she would have looked like. Their identicalness is a gift, though it is a dark one.

After Gideon died, a doctor did suggest that perhaps the clot was genetic in origin.

Now when people ask why she died, I am not sure what to say. My daughter’s autopsy doesn’t provide for the “whys,” it simply supplies the “hows.” I cannot say that it was because she was born too early, because often when I am asked this question I am holding a baby who was born on the same day with the same DNA as the child that I lost.  My mind turns brat and transforms “because” from a conjunction to a noun. My daughter is dead because. Her sister is alive because.

After all that has happened, I am not sure what to make of the fact that for four to seven days my daughters were one and the same. Some strange gravity caused there to be two, and then a crueler force left us with one.

Bridget Foley's debut novel, “Hugo & Rose,” is being released by St. Martin's Press on May 5. She lives in Seattle. You can connect with her atwww.wonderfoley.com.