"I’m f**king pissing up a rope in this f**king business": This MLB manager's tirade is a swear-words masterpiece

Reds manager Bryan Price unloaded on the press, cramming a stellar amount of profanity into one golden rant 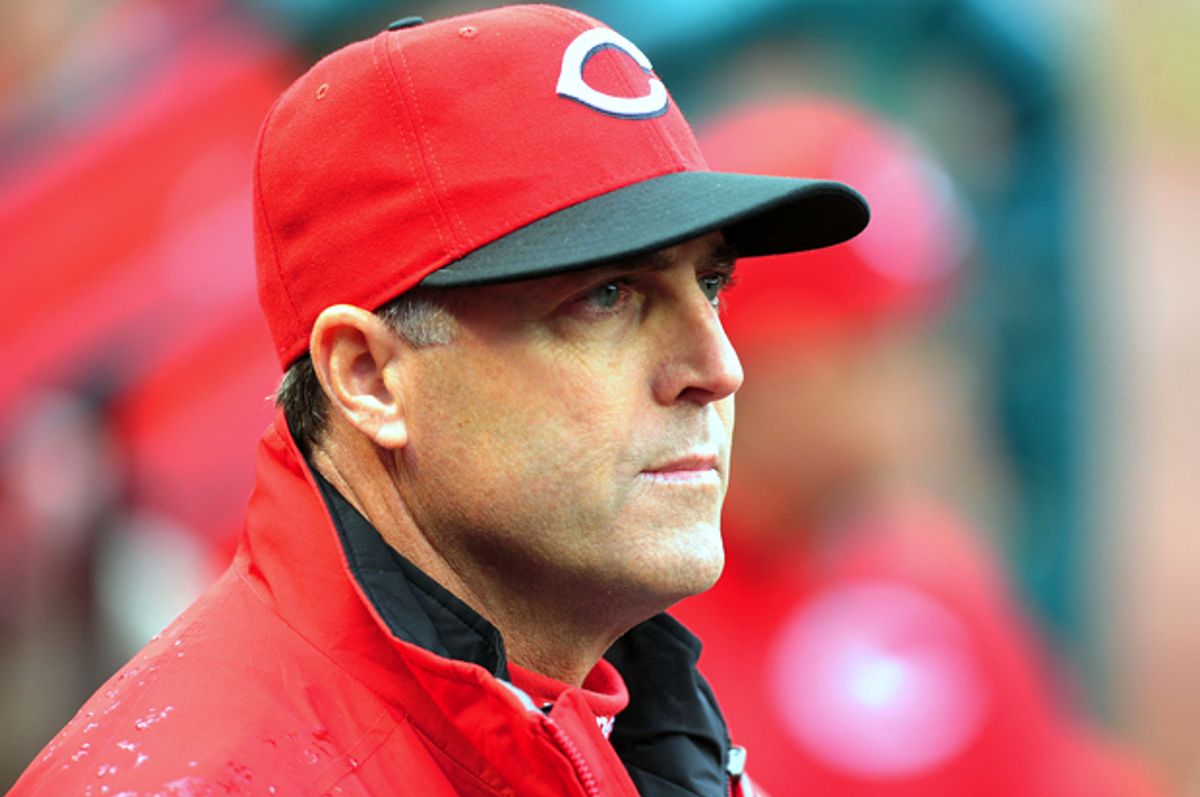 It was seriously impressive, even by baseball standards. On Monday evening, Cincinnati Reds manager Bryan Price was understandably in a somewhat emotional place as his team was coming off four straight losses. During his daily pre-game session with the press, Price became dismayed that it had been pointed that All-Star catcher Devin Mesoraco was away from the team for Sunday's losing game in St. Louis. Price asked reporter C. Trent Rosecrans about it, saying, "I don't understand what the importance is for everybody to know if we have a player that's not here. We don't benefit from the other teams knowing we don't have a player." And then, when Rosencrans replied honestly and "as a fan," Price rebutted with a masterful, five minute and 34 second tirade that Rosencrans says clocked in with "77 uses of the 'F' word or a variant and 11 uses of a vulgar term for feces (two bovine, one equine)." Perhaps not coincidentally, the Reds also went on to win against Milwaukee, 6 - 1.

One rarely gets to experience profanity of such a satisfying and genuinely professional level, so I suggest that rather than reading the asterisk-riddled transcript, you treat yourself to the audio, which begins with a courteous "Can I ask you a question?" builds to a "I just need to know if there's something we want to keep here, it stays here," and then quickly heats up to a bleep-heavy cri de coeur of exasperation and fury. Typical observation: "Ah, f***. I'm just, I'm f****** p****** up a rope in this f****** business….. I bend over backwards to be honest and direct with you f****** guys and you stick it right up my f****** a** — and the f****** team's a**."  It is the verbal equivalent of competitive eating champion Molly Schuyler polishing off those three 72-ounce steaks. I for one eagerly await the remix.

Price may feel like dropping a few more expletives soon should he, as Des Bieler points out Tuesday in the Washington Post, find himself in line for a stiff fine for his shenanigans. "At the very least," Bieler says, "Price is highly likely to be called into the office of a Reds executive, who will explain to the manager that the role of reporters is not to help the team, but to discover as many facts as they can about it." And that — the crux of Price's tirade and not the vocabulary of it — really nails the distinction between what we call "problematic" speech and what is not. It's really something of an achievement that Price — silly, silly Price — managed to simultaneously cram a near record breaking amount of profanity into a short span of time while strongly suggesting to the assembled members of the press that are certain things they shouldn't say.

Price's achievement has made him a major news story this week, with the Washington Post comparing it to Hal Mcrae's historic 1993 meltdown. Where it fails — and what several fans have found amusing — is in Price's assumption that reporters are there to protect the team. But where it achieves greatness is in its straightforward, relatively non-abusive sheer descriptiveness. Contrast it with Britt McHenry’s recent hostile dressing down of a towing company employee, in which the F bombs she dropped were not nearly as unpleasant as her dismissive, insulting comments about the woman's teeth and weight.

Profanity doesn't have to be mean. Instead it can embellish anything, like Price's question and answer of "You know why f****** Billy Hamilton didn't f****** play the other day? Because his f****** finger's hurt and he couldn't hit right-handed comfortably." It's not just Billy Hamilton or his playing or his finger. It's all those f****** things. Swearing also feels amazing. It's a scientific fact! Earlier this month, researchers from the United Kingdom's Keele University, eerily predicting Price's rant, observed, "We want to use more taboo words when we are emotional. We grow up learning what these words are, and using these words while we are emotional can help us to feel stronger." And in a 2012 feature for Psychology Today, Neel Burton argued that swearing can cause a pain relieving, "analgesic effect," can defuse socially tense situations, and that "The health benefits of swearing include increased circulation, elevated endorphins, and an overall sense of calm, control, and well-being."

There's a time and a place for everything, and as someone who has spoken at funerals and charity events and chaperoned events with little girls, I really do try to gauge the venue before busting out the Anglo Saxonisms. But I am always skeptical of people who are violently opposed to swearing in any form, anywhere, who tsk tsk any and all forms of four letter words as somehow "unnecessary" or, my favorite, "unladylike." Of all the hurtful words in our language, the ones related sex and excrement hardly seem capable of inflicting any real damage. And sometimes, it just feels really good to say them. It feels good to say them 77 times.