Obama's deal with the devil: The dangerous treaty that has him teaming with the GOP

"Americans should be as proud of this agreement as Madrid should be of the Spanish flu," said one Democrat 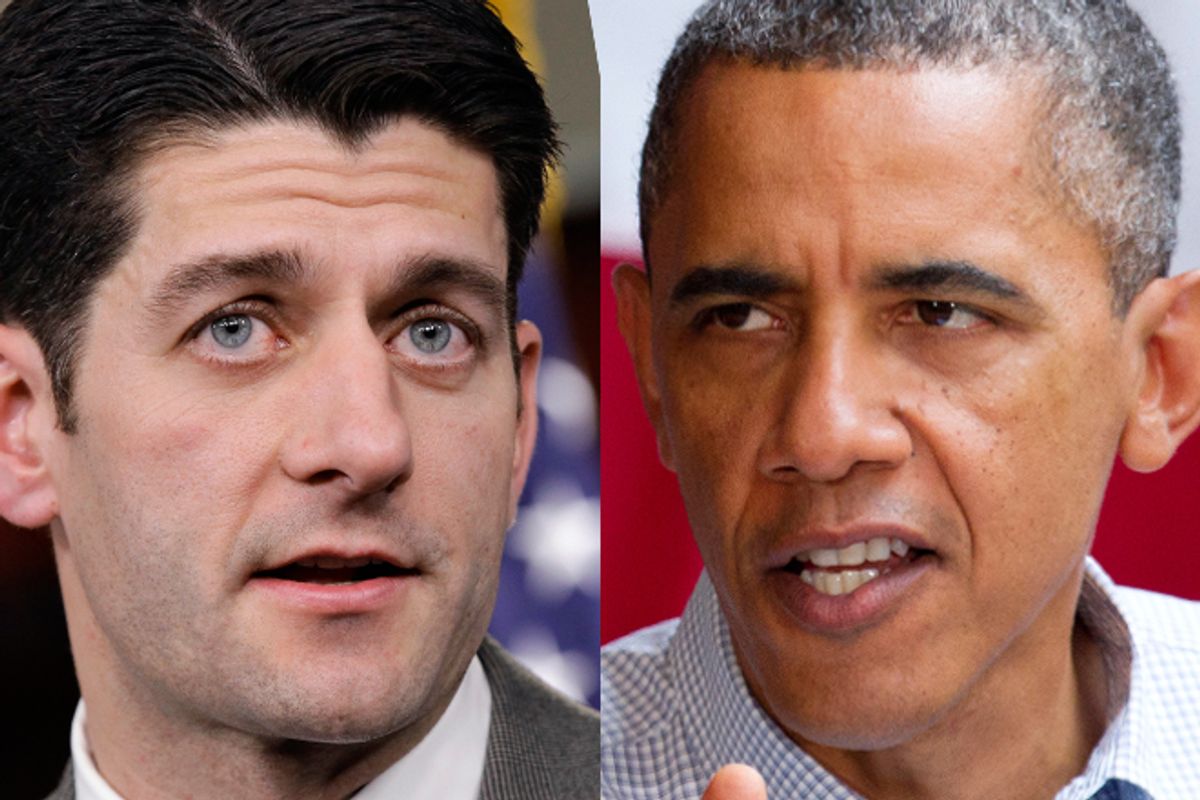 Trade deals have upended the typical dynamic in Washington, with Congressional Republicans and the White House aligning against members of the President’s own party. The White House wants so-called “fast track” authority to negotiate agreements like the Trans-Pacific Partnership (TPP), and get an expedited up-or-down vote with no amendments or filibusters. Democrats disapproving of prior trade deals like NAFTA don’t want to give up those Congressional powers.

To be honest, I hesitate to call these trade deals; TPP’s title doesn’t include the word.  Critics believe they have far more to do with maximizing corporate profits -- whether through ensuring higher prices for prescription drugs or aggressively enforcing intellectual property restrictions or allowing companies to sue governments over their sovereign laws -- than facilitating the exchange of goods. But at least one dissenting Congressman thinks TPP also fails on its own terms, as a trade agreement.

The Obama Administration has tried to sell skeptical Democrats on TPP, not with economic arguments but national security ones. The theory is that a successful trade deal that lowers tariffs -- taxes on imported goods, basically -- and imposes higher standards on the 12 countries negotiating TPP will help America combat China’s rising influence, since that country is not part of the agreement. “If we do not help to shape the rules so that our businesses and our workers can compete in those markets,” President Obama said at a news conference on Friday, “then China will set up rules that advantage Chinese workers and Chinese businesses.”

But Rep. Brad Sherman (D-CA) claimed in a conference call last week that TPP would actually give China special privileges. “This is a great deal for China because of the 'rules of origin' provision,” Sherman said. “Goods can be 65 percent made in China, then they can ship them to Vietnam, slap a ‘Made in Vietnam’ label on it and get them into this country duty-free. But because China’s not party to the agreement, we can’t get our goods in [to China].” In other words, China would get the benefits of selling its goods without tariffs, while not having to open their markets to U.S. goods or abide by any other TPP rules.

That’s a very serious charge, one that would undermine the purpose of outflanking China, instead handing them trade preferences through the back door. And AFL-CIO President Richard Trumka made the same allegation yesterday.

One of the problems with TPP is its extreme secrecy, which makes it impossible to fact-check these claims. Sherman, as a Congressman, has participated in classified briefings on TPP and has access to the current text. But he cannot bring staff to read and analyze the agreement, cannot make photocopies and cannot take notes. So you have to be a detective to figure out what’s going on.

First of all, in an interview with Salon, Sherman explained that rules of origin in most recent trade agreements allow non-signatory countries to assemble significant portions of goods that can then be traded between signatories without tariffs. The rules vary on a product-by-product basis; you can see how they’re applied in this annex to the U.S.-Korea Free Trade Agreement. For example, 65 percent of a ship, or a surgical instrument, or railway locomotive could be built in another country and still be called “Made in Korea” when sold to the U.S.

“I say 65 percent because it’s the most typical,” Sherman told Salon. “Some goods might be 40 percent, some goods might be 80 percent.” This raises a problem of detection. Banning goods from passing through China at all is relatively easy. But how do you get so precise as to restrict the production of more than 65 percent of a good? "Once you say it can be 65 percent made in China," Sherman said, "maybe it’s 65 percent, maybe it’s 85 percent."

An illustrative example would be on textiles, where domestic manufacturers have actually tried to tighten the rules. Currently, China is number one and Vietnam is number two in terms of apparel exports to the United States. And that’s misleading, because Vietnam mostly cuts and sews yarn, fabrics or fibers imported from China.

With the Trans-Pacific Partnership, Vietnam (a signatory to the deal) would have no tariffs on textile exports to member countries. The U.S. endorsed a “yarn forward” rule of origin, where all apparel exports within the trade zone must use raw materials, from the yarn forward, either made locally or imported from other TPP members. That would theoretically bar China from exporting to Vietnam for cutting and sewing.

But export-driven countries like Vietnam, and retailers like Walmart, Levi’s and Target, succeeded in securing more flexibility in the rule. The U.S. Trade Representative’s current “summary of objectives” on TPP includes both “yarn forward” and something called the “short supply” rule. This latter rule would allow raw materials “not commercially available in the United States or other TPP countries to be sourced from non-TPP countries and used in the production of apparel in the TPP region without losing duty preference.” This shift earned praise from industry retail groups. But the U.S. Trade Representative’s office believes this flexibility is limited, and that non-TPP countries will not be able to receive preferential treatment by laundering their goods through a TPP country.
Rep. Sherman disagrees. “You’re not going to disqualify a good if there’s a Chinese button on it,” Sherman told Salon. Proponents of the deal, Sherman says, use rules like "yarn forward" as misdirection. “They’ll say, ‘we got a prohibition on yarn in sweaters.’ But you can deem something ‘Made in Vietnam’ if it’s 65 percent made in China.”

The National Council of Textile Organizations (NCTO), representing domestic textile manufacturers, supports fast track, suggesting that they believe the limiting provisions work. But they’re putting a lot of faith in the “principal negotiating objectives” in the bill, which are supposed to guide talks on TPP and other deals. On textiles, fast track says negotiators should “obtain opportunities for U.S. exports of textiles and apparel in foreign markets.” But New Zealand’s trade minister said last November that TPP negotiators already reached a deal on rules of origin, so it’s unclear how the negotiating objectives would matter. “I can decide as an objective that I would like to complete a marathon,” said Rep. Rosa DeLauro (D-CT), a strong opponent of TPP. “Without something enforceable, that doesn’t matter.” (USTR, for their part, says there’s no final deal yet.)

It’s one thing for low-wage countries like Vietnam -- which massively subsidizes its growing textile sector (responsible for 11.5 percent of U.S. apparel imports) and which jails individuals who try to form labor unions -- to be included in TPP. It’s another thing for China to allegedly get the same benefits while giving up nothing in return. “You’re giving China something better than membership in this deal,” said Rep. Brad Sherman. “With Mexico and Canada (the main signatories in NAFTA), at least we have access to their markets. This is a one-way deal for China.”

The U.S. Trade Representative’s office gave Salon this statement: “We are working to make sure that the Trans-Pacific Partnership agreement supports American jobs and American manufacturers now and in the future.  The rules we set will say very clearly, ‘No free rides for non-member countries.’” They also highlighted this Reuters story from last September, which argues that China would lose apparel market share to Vietnam “if the United States has its way” in negotiations. But that only suggests a potential outcome. USTR believes that there will be months to vet the Partnership once all parties agree to it, and before Congress votes. But by that time, the agreement will get a fast-track vote with no filibuster or opportunity for amendment.

Rules of origin is one of numerous concerns from opponents of TPP. But it causes serious problems for the argument that the deal is necessary to halt China’s march to power. Not that the Administration’s other arguments on China make much sense to Congressman Sherman either. “Then they say China might join the agreement later. So you’re building a house for China while saying you’re building a house to keep the Chinese out!” Sherman said. “Then they say, well, isn’t it wonderful that China will have to buy into America’s trade rules. But these are Wall Street’s trade rules. Americans should be as proud of the principles in this agreement as the citizens of Madrid should be of the Spanish flu."