Christopher Walken, Hollywood's favorite eccentric: "You have to play the hand you are dealt" 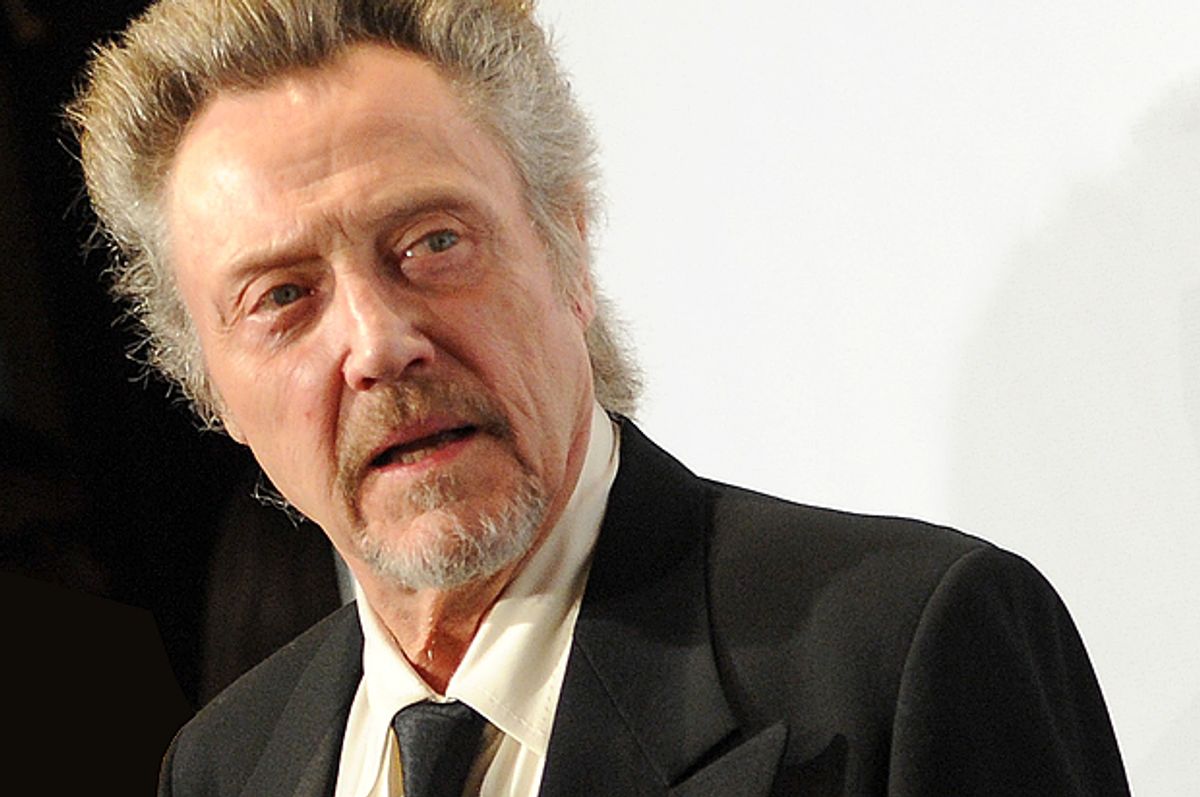 Christopher Walken is charming. Christopher Walken is intimidating. He has played everything from a song and dance man in "Pennies from Heaven" to a Bond villain in "A View to a Kill." His staggering performance in "The Deer Hunter," won him an Oscar, and his role as Leonardo DiCaprio's dad in "Catch Me If You Can," netted him another nomination.

Walken has been working in films, TV, and theatre for more than 60 years, and he is always memorable. Usually, he is menacing. His distinctive verbal cadence has a real edge to it, as if the conversation could turn at any moment. But in person, Walker is rather shy, almost wary of attention.

The actor impresses yet again in his latest role, as Paul, a once popular singer who is angling for a comeback in "When I Live My Life Over Again," a terrific chamber drama that had its world premiere at the Tribeca Film Festival. When Paul's wayward daughter Jude (Amber Heard) turns up at his home in the Hamptons during the off season, both father and daughter reflect on their personal and professional accomplishments both good and dubious.

Walken met with Salon at the festival to reflect on his work and career, as well as music, root canals, celebrity and fatherhood.

People may not think of you as “The King of Romance,” as Paul is known. Are you secretly a crooner?

I don't know if anyone would believe I am a singer. We'll see. I'm not a crooner. I said for this film, they should get someone who can sing.

You are most recognized for your work in “The Deer Hunter,” your cameos in “Annie Hall” and “Pulp Fiction,” and your turn in “Catch Me if You Can.” "When I Live My Life Over Again" plays with Paul's image of and observations on celebrity and fandom. How do you create a character who is different from how you are traditionally cast?

Well, when you have a part, you try to look for things you can relate to. I've been in show business since I was a kid, and so has Paul. He's used to performing in front of live audiences, and so am I. My part of that [relatability] was more from musicals and dancing and stuff.

All kinds of music. I have a big collection from when I was a kid. I still have a turntable. I remember back in the days--it was ridiculous--that good singers were putting out disco albums. It was so stupid. If you went to the clubs, you heard them all the time.

The title song is all about looking back at life as a dress rehearsal, considering regrets, and doing it over again. How do you reflect on your life and career? Any bitterness?

[Laughs]. I've been very lucky. Very, very lucky. I think that  idea, as Woody Allen said--you know, he says all these great things--he said that reincarnation would be good news for us all. If you are a movie actor and you do one take and the director says "ok, let's go, move on," you say, "oh, could I have one more, or two more?," and so you get to do another take, which is always nice. It would be nice to get another chance.

What would you do differently?

I don't know that I wouldn't do anything in my life differently.  It seems to me that everything is really luck. From the people you are with or from when you are born. It's no good wanting to be Michael Jordan if there's no chance that it's ever going to happen. You have to play the hand you are dealt. I think I did that well.

I'd love a mulligan. Numerous ones. When I was a kid in the '50s, there was a famous book -- it was really popular -- "The Search for Bridey Murphy." Does that ring a bell? She was this woman in Ireland who convinced all of these doctors that she had previous lives. She would go into them in great detail. Six or seven, all different things, and when she would relate them, she changed the way she spoke and behaved. Everybody had that book.

Paul is admittedly a bad dad. You excel at being villainous, but you also play a very nuanced, flawed character. Paul wants what’s best for his daughter, but he doesn’t quite take the right approach with her.

He's a bad dad, and bad husband, but I guess he's fun. My father was a great guy. He worked very hard. He was very quiet. Kind of kept to himself. But as soon as he had a grandson, he completely opened up, went on picnics, and such. He was a totally different guy. Paul's like that to me.  It kind of skips a generation.

My father really worked hard. He loved to go to work. He was a baker. He had his own bakery. He had a real routine. I also very much have a routine. I do the same thing every day. I get up, read, and I get on the treadmill and watch Charlie Rose. It's always the same.

What can you say about staying young while getting older?

It's futile. The only thing you can do is take good care of yourself. All the obvious things. Otherwise, you can't do anything. Or you could be lucky with your genes, I suppose.

Paul sees his daughter as wasted talent. You have a strong work ethic.  What motivates you to act?

You I know, I went for a deep root canal. I had to go to this special guy.... His office wasn't like a dentist. It was like a... [pauses, without finishing the thought]. And he [the dentist] came out in a suit. Anyway, it was very... [pauses without finishing the thought]. And I said to him, it has been suggested to me that maybe you would not have to do a deep root canal on me. Because maybe it's not that bad. He said, to me, "It's what I do." What he meant was, sit down, because I'm going to give you deep root, whether you want it or not. But I must say, he was really, a maestro. But when people say to me, "why did you take that part?" — it's what I do. There is a myth that there are actors who make choices. But most actors just take jobs. And I take jobs.

Paul claims to have played ping pong with Nina Simone. What are some of your more colorful ‘celebrity’ experiences?

When I hear the list if things that he's done, I don't know that that was in the script. I've never done that. Maybe you jump out of an airplane with someone famous, but it doesn't mean you know them... In Los Angeles, I always stay at the Chateau Marmont. I get up very early in the morning. On the weekends there everyone stays up late. The only time the lobby is empty is early on a Sunday morning. I have the whole place to myself. And it's about the size of this room. I have this chair, where I get my New York Times, I go sit in this chair. And one morning, I get downstairs and there is a guy sitting in my chair. I'm filled with rage. I take my Times and I sit diagonally across from him and I'm reading my paper and I'm looking at him. And then he motions for me to come over, and it's Peter O'Toole. He said to me [imitating O'Toole] "Sit down." And I had the most wonderful conversation with him. We had tea  and talked for a half an hour. And then I walked with him down to his car. I'd never met him. That's a nice celebrity encounter. He'd taken my chair, but I didn't mention that.

What is the appeal of indie films, or leads vs. character roles?

Indie films don't have a lot of money, so they get shot in a time-efficient way, which I like. In the old days, those studio movies--you know, "Casablanca" was shot in six weeks. It was typical to make those famous movies in six weeks. You can do that or you can get on a movie for 3-5 months. That happens a lot. So it's much more interesting to go to work and be busy than sit around all day. The bad part is you do not get paid as well, but on the other hand, a lot of the ones I do are close to where I live, so I get to go home on weekends.