The best TV show you're not watching: "The Americans" will never be must-see TV, no matter how hard it tries

FX’s Soviet-spy drama is closing its best season yet tonight. So where are the fans? 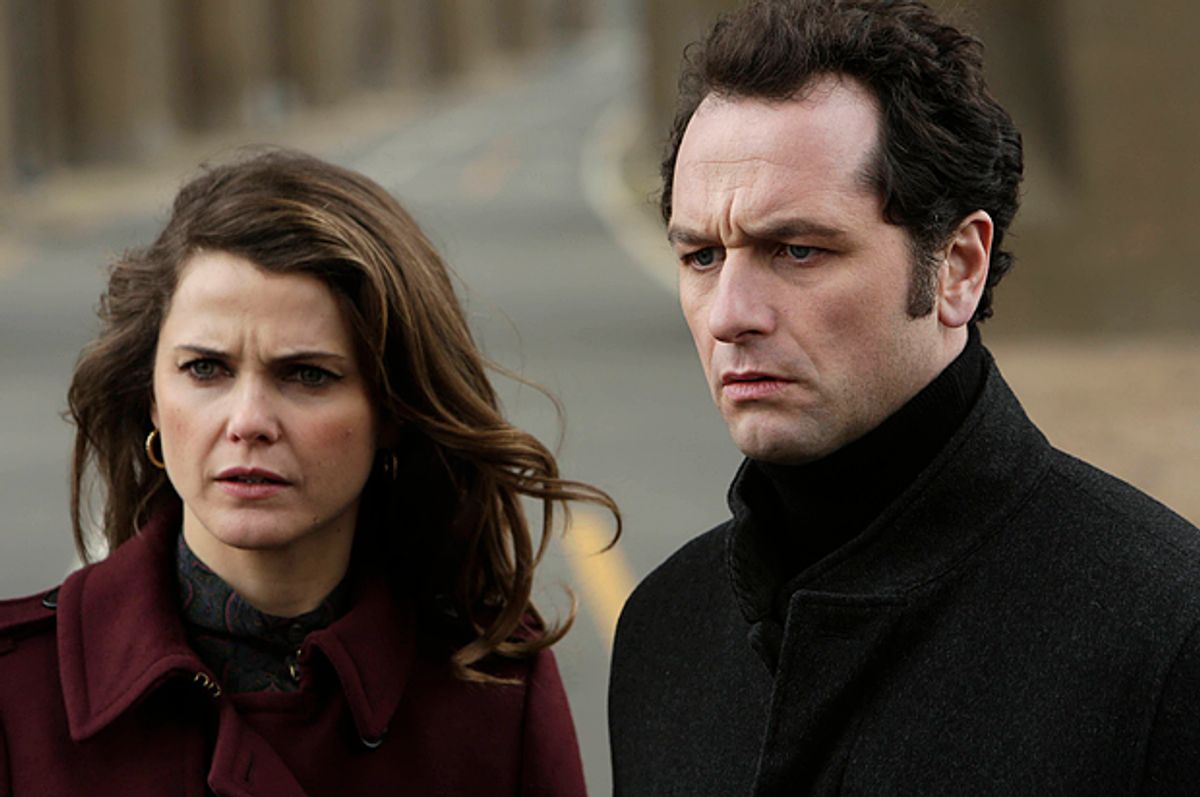 Keri Russell and Matthew Rhys in "The Americans" (FX/Patrick Harbron)
--

For its fans, “The Americans” is not just a beloved show, it’s a mission. The FX show, which concludes its third season tomorrow evening, is talked about almost exclusively in terms of how not enough people are watching it—critics and viewers who love the show are often stumping for it as much as they’re analyzing it. At Vox, Todd VanDerWerff calls it “the best show on TV”; Emily Nussbaum at the New Yorker finds it to be “possibly the best current drama out there (at least of the ones I’ve been able to keep up with!),” and Matt Zoller Seitz at Vulture titled his review in January, “For the Love of God, Watch ‘The Americans’ Tonight.” These are rave reviews from respected critics, in an era when TV criticism is read more than ever. And yet the praise doesn’t seem to stick.

Which is perplexing, because “The Americans” is an empirically letter-perfect prestige drama. It’s moody, it’s violent, it’s sexy, and it’s even period—set in the very early ‘80s, a period ripe for nostalgia. The show is about two Soviet sleeper agents who have lived undercover in Washington, DC for so long that everything about them—their marriage, their children, their names—smacks of good old-fashioned middle America. Except that then they wear wigs and costumes and sleep with strangers, to advance the cause of Mother Russia.

It’s worth observing, briefly, that a major reason “The Americans” doesn’t have more viewers is because the show is streaming online exclusively with Amazon Prime. Though Amazon is the second-most popular streaming service, it is still leaps and bounds behind Netflix, the most popular. Numerous shows—including “Breaking Bad,” most notably—have built audiences on streaming services who then go on to watch the show live. Even a presence on Hulu would make it easier for viewers to watch an episode for a few weeks after it aired. Adding insult to injury, Amazon Prime isn’t supported on Apple TVs, which makes up a solid quarter of the streaming devices market. That’s a lot of hurdles for even an interested viewer.

But there’s more to it than just that—after all, we do live in a world of robust online piracy, when legal means become too frustrating. “Orphan Black” is also exclusive to Amazon Prime, and that hasn’t stopped legions of fans from making gifsets of Tatiana Maslany on Tumblr, so clearly, access is not the only factor at play here. I think what’s happening with “The Americans” is a larger phenomenon about what it takes, emotionally, to watch a television show. Sometimes ambivalence around a show is purely a reflection of personal taste. But the polarity around “The Americans” is striking: For every person who says it’s one of the best shows on television, there’s another complaining that it’s “boring,” “cold,” or even traumatic. This is not just an acquired taste, it’s an acquired distaste, too.

Full disclosure: I am one of those viewers that never can quite wholly commit to “The Americans.” It’s a good show—sometimes even a great show. The season ending Wednesday evening is to my mind the series’ best yet—one where some of the most carefully laid secrets from as far back as the first few episodes are beginning to unravel. The musical cues in the show are second-to-none, especially when it comes to the strategic deployment of Fleetwood Mac songs. It’s not particularly adventurous with its direction, but it’s always solidly well-crafted, moving from action sequences to intimacy with ease. The performances, even from fourth- and fifth-billed actors, are fantastic.

And its authenticity is hard to dispute: Joe Weisberg, the show’s creator, is a former CIA case officer, inspired by the real-life story of Russian sleeper agents living in America that broke in 2005. Entire scenes are in Russian; several actors on the show have Russian heritage (specifically, Annet Mahendru, Costa Ronin, and Lev Gorn). Like “Mad Men” before it, “The Americans” wholly commits to its time period—boxy cars, terrible fashion, shabby Soviet architecture, Farrah Fawcett hair. It is not a show that is sloppy, lazy, or ill-considered. There is nothing wrong with it. It is just, simply put, a show that is hard for me to invest in.

And investment is particularly key for television shows, because they take up so much of our lives: a weekly commitment, if watched live; hours of viewing, if binged later; years, if the show has more than one season. At HitFix Alan Sepinwall wrote a piece on sticking with shows even when they’re not great—a term he’s calling not “hate-watching,” but “hope-watching”—and it’s a case study in the emotional investment television requires of its viewers. Sepinwall is writing, specifically, about shows that he sticks with despite their quality. “The Americans” is in the exact opposite boat, for me. It’s a very well-crafted show missing some ineffable je ne sais quoi—the “zsa zsa zsu,” as Carrie calls the spark of chemistry she feels with Berger, in “Sex And The City.” “The Americans” is charismatic for some, but it’s not alchemically watchable—it’s not must-see TV. It’s something else.

It’s the descriptor “cold” that rings true for me, even though it’s an inadequate adjective. The show is cold, yes—but not because it’s unemotional. Far from it. The protagonists, Philip and Elizabeth Jennings (Matthew Rhys and Keri Russell) are always emotional. The difference is that they’ve learned how to use it to their advantage. Elizabeth can’t just go through the motions of having sex with a mark—she has to actually get aroused, she has to make it real. Philip channels his concerns for his children into his liaison with a 15-year-old girl poised on the brink of a lot of bad decisions. It is, as Nussbaum wrote, an astonishingly intimate, emotionally present show.

And yet, it struggles, I think, to extend that intimacy to its audience. A lot of shows about death and mayhem may be populated with nothing but embodiments of grim despair, but they will still make an effort to be funny—“Breaking Bad,” one of the most violent and upsetting shows I’ve watched, was still a sardonic, starkly humorous show. “The Americans” can’t quite manage that. It’s hard for a show to find humor when it benefits the protagonists to keep everyone as miserable as possible.

Which is another part of the show’s essence. There’s no one to root for in “The Americans”—almost everyone, with the exception of poor Martha (#PoorMartha), is in a terrible prison of their own making. The relentlessly brutal portrayal of what espionage does to people fails to account for the fact that these people chose this life of lies, and with a few exceptions, they don’t seem to particularly regret it. Indeed it wasn’t until this season’s “Do Mail Robots Dream Of Electric Sheep?”—one of the best episodes of the show—that Elizabeth was forced to explain herself to an old woman she is slowly poisoning to death. And even at this point in the show, three seasons in, she’s mostly able to tell the woman (Lois Smith) that she believes she’s making the world a better place. She’s conflicted, yes. But she’s encased in an ideology that doesn’t offer any points of entry. It’s hard to feel empathy for someone who has trouble extending it to anyone that is in her way.

Hard, but not impossible: This is the beauty of “The Americans,” too. It’s a hard show to love, but in some ways, that’s the point. None of this, the show seems to say, gesturing at the world in 1983, is particularly easy. It’s a reminder of the worst part of humanity, and a memento of a terrible time in history—when a pointless struggle between two ideas of nationhood killed thousands of people and ruined the lives of many more. It’s all real, and still upsettingly relevant. But what I struggle with in particular is the show’s lack of hope, in the midst of so much horror. I respect the hopelessness—it’s valid, it’s rational, and given how we know the Cold War is going to end, for the Jennings family, it’s inevitable. But it’s hard for me to live with that, for hours or weeks or years at a time. My distance from the show is a defense mechanism; a way of holding out hope for my future, as yet unwritten.