Smells like doomed genius: "Montage of Heck" captures the contradictions of Kurt Cobain -- and the America that shaped him

Yes, it's Courtney-approved, but this documentary is a moving and powerful portrait of Kurt Cobain's America 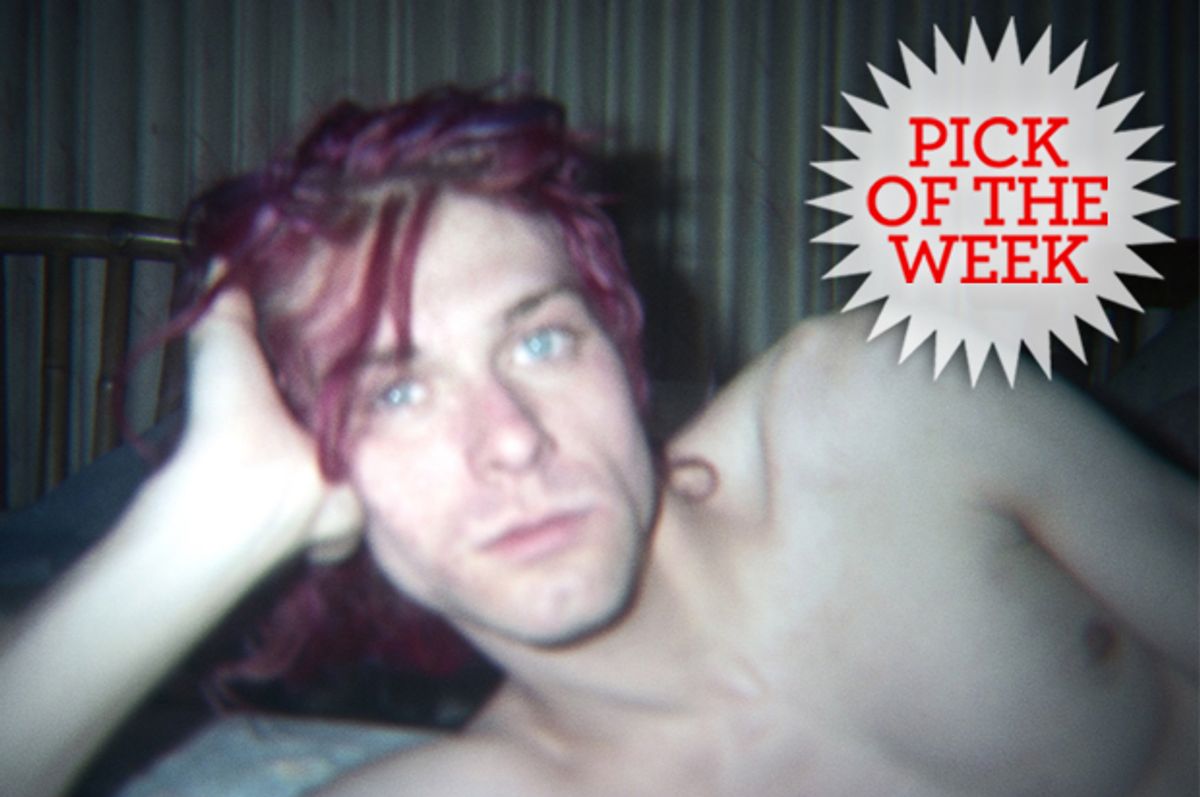 I remember coming to work on the morning Kurt Cobain was found dead, and feeling puzzled that a younger writer at our San Francisco alternative weekly – who would go on to become a prominent newspaper and magazine editor in New York – was so upset that she sat at her desk all day crying. I could psychoanalyze myself at Cobain-like depth, but the reasons I didn’t get it were basically stupid and defensive. Of course I knew Cobain’s music, and I understood that his death was a big story. But I was also deeply committed to my own disillusionment, to never being taken by surprise. I had already been through the first wave of punk rock, the worst years of AIDS, the deaths of a lot of people less famous than him. I would have rejected Cobain’s status as generational icon even more forcefully than he did – which, in retrospect, looks a lot like deep yearning, thinly wrapped in snobbery. His combination of suburban angst, drug addiction and mental-health issues was an old story, wasn’t it? Just another “Rock ‘n’ Roll Suicide,” a song David Bowie wrote in 1972. Nothing to cry about.

Fourteen years later, I was with my kids at a beachfront amusement park when my friend Laura Miller, Salon’s book critic, called to tell me that David Foster Wallace was dead. I got out of the roller coaster line to talk to her – Laura knew Wallace, but I didn’t – and one of the first things to swim into my brain, addled as it was by sunshine and a friend’s grief, was Kurt Cobain. At the time, I understood the connection as a personal commandment to have this experience, complete with all the Cobain-like and Wallace-like ironic introspection it might require; I took it as an edict not to insulate myself against the shared emotion, and potential shared meaning, of this moment of collective mourning. It took longer to see that the linkages between Cobain and Wallace go much deeper than that, and that many other people registered the connection in approximately the same way.

For many viewers of Brett Morgen’s extraordinary HBO documentary “Kurt Cobain: Montage of Heck,” the most fascinating and powerful elements of the film will be found in the intimate home videos shot by Cobain and Courtney Love in the early ‘90s, before and after their daughter Frances was born. (Frances Bean Cobain is an executive producer of the film, and both its remarkable depth and its limitations derive from the fact that it’s an authorized biography, made with the cooperation of Love, Cobain’s parents and various former friends and bandmates.) That footage is absolutely heartbreaking in its depiction of a loving, flawed, high-spirited and essentially normal young family, a long way from the drug-crazed rock-star fiends favored by the tabloids of that not-so-distant era. Yes, rock fans, you do get to see Courtney naked. Impressive as that is, it’s not half as much fun as hearing her ventriloquize baby Frances complaining that her dad’s band are self-indulgent whiners who aren’t as good as Guns N’ Roses. (Footnote for scholars: Cobain’s obsession with GnR frontman Axl Rose is fascinating, but ultimately aren’t they more alike than different?)

But I watched that amazing material with a sense that by that time the die had already been cast. Love and Cobain were famous and their baby, allegedly born addicted to heroin, was famous too. What they were “really like,” as human beings, was irrelevant. As long as they lived they were going to be famous rock ‘n’ roll fuckups, damaged symbols of a damaged generation. For someone with Cobain’s particular set of neuroses, ailments and vulnerabilities, not to mention his philosophical and aesthetic predilections, that might literally be a fate worse than death. I’m not saying that other outcomes, not involving a shotgun blast to the head, were not possible. But there was no easy or painless exit from the prison-house of celebrity available to Kurt Cobain, and he didn’t much like living in it.

Morgen’s title refers both to an extended audio collage Cobain once recorded on cassette tape – just one example of his explosive, unstoppable cultural output – and to the method of the film itself, which assembles an immense trove of public and private material to illustrate a life spent first in obscurity and then in the unbearable spotlight. He has Cobain’s famous notebooks full of lyrics, journal entries, cartoons and momentary observations, of course, but also home movies of his 3rd birthday party, a collection of family snapshots, recordings of early radio interviews and footage of the first Nirvana shows in Aberdeen or Olympia, with a few dozen people in attendance.

He interviews Wendy O’Connor, Cobain’s overly loquacious mother, Don Cobain, his monosyllabic father, and Tracy Marander, who was Cobain’s first serious girlfriend and the first woman he lived with. (He was a total deadbeat, from the sound of things, but Marander doesn’t seem to regret working for a living while he played guitar and watched TV. Here she is in a movie, all these years later.) Oh, and there’s music – a lot of it, the famous tracks and a bunch of lesser-known ones. You will indeed hear “Smells Like Teen Spirit,” in a number of versions and a variety of contexts – and when we finally get the actual Nirvana recording over the closing credits, well, I’m not saying I cried in grief and joy and anger but I’m not saying I didn’t.

Rather than trying to describe all these people who have lived on and gotten older, and who now find themselves sitting on their couches struggling to describe or explain a guy they used to know who became very famous and then died, I would say that “Montage of Heck” paints a bitter but compassionate portrait of the downscale white America that shaped Kurt Cobain. He was born in 1967, which surely felt more like 1957 in Aberdeen, Washington, than it did in the tumultuous climate of big cities and college towns. O’Connor says she remembers Aberdeen as a wonderful place to raise a family, and that her kids had a happy childhood. Not much later in the film we hear Cobain describe Aberdeen, in a recorded conversation with an old friend, as an “isolated hellhole” dominated by moralistic Reaganite conformity. You don’t get the feeling that teenage Kurt was an easy kid to live with, or someone who naturally made the best out of difficult circumstances. But his inarticulate sense that the society around him was fundamentally inauthentic, and his yearning to transform it or destroy it, molded one of the last and greatest voices of what Casey Kasem used to call the “rock era.”

Teenage alienation and rebellion is of course not a new phenomenon, and is not unique to the depressed lumber towns of the Pacific Northwest (although I imagine that lent it a particular coloration). In the animations Morgen’s team has created to illustrate Cobain’s audio montages, we witness the highly familiar quality of Cobain’s childhood and teen years: His parents were unhappy and got divorced, he smoked a lot of pot and had frustrating sexual experiences, he was an intelligent and creative kid who found school to be soul-deadening and found some release in loud music. There may be no comprehensible answer to the question of why he responded so keenly to these stimuli, which were applied with equal force to millions of other kids of the downward-trending ‘70s and ‘80s. From an early age, Kurt Cobain yearned to make memorable art, escape his surroundings and become famous, and from an early age he contemplated ending his life, with the kind of obsessive, repeated “jokes” that are impossible to gauge from the outside.

If Cobain and Wallace worked in different mediums and different registers, and emerged from different sectors of middle-class white suburbia – indeed, you can only call Cobain’s background “middle class” under the postwar convention that all white Americans who have jobs and cars belong to that class by definition – there is no mistaking the kinship of their unnaturally keen responses. They were 1960s babies who grew up amid Vietnam and Watergate and the gas crisis and Whip Inflation Now and Jimmy Carter in his cardigan talking about our “national malaise,” and who were teenagers and young adults as that malaise and turmoil turned to amnesia and denial and the suicidal, delusional counterrevolution of the Reagan years. America has not recovered from the cultural and political whiplash of those years and probably never will.

All of us who lived through that period bear the scars, and we have all tried to react to it and push forward as best we can. Of course Wallace is not the only important writer of their generation, nor is Cobain the only memorable singer-songwriter. But they are joined by the intensity of their response – “Nevermind” and “Infinite Jest” are highly singular works in totally different traditions, but I think they represent the same scale of achievement and possess a similar cultural resonance – and by the way they touched a deep well of passion, hunger and unease that transcended demographic or generational clichés. It’s by no means irrelevant that they were both white heterosexual men who were deeply aware of the problematic nature of the Great Man archetype, and committed to addressing that issue in their work and their private lives. And it’s certainly not irrelevant that they became overwhelmed by the vicious contradictions of fame in our era -- or, to put it more simply, that they could not escape the private demons of mental illness and drug addiction and ended by killing themselves.

As I noted earlier, “Montage of Heck” was made with the cooperation of Courtney Love and several other relatives or intimate friends of Kurt Cobain. (The most prominent omission is Nirvana drummer Dave Grohl.) Among other things, that means the movie does not traffic in any of the pathological conspiracy theories around Cobain’s death, or indeed depict his death in any way. It may whitewash some details of Love and Cobain’s relationship – I wouldn’t know, and don’t especially care – and it certainly depicts the reporters who raked up dirt on the couple, especially Lynn Hirschberg of Vanity Fair, as unscrupulous vultures.

I would agree that the media’s vampirical obsession with the Kurt-and-Courtney story was not journalism’s finest hour, and that it reflected profound anxiety about the youth-culture moment they were seen to represent. But that’s too large a problem to unpack here; I think it’s best to take the Courtney-centric area of the film with a grain of salt and draw your own conclusions. Those are minor issues in a masterful and often deeply moving portrait of a volatile American genius, a portrait that goes far beyond one man, one family and one rain-sodden small town. It depicts the society that nurtured and fed that genius, and that made his unlikely creative explosion possible, as being the same environment that poisoned him -- and suggests that the rise and fall were inextricably connected. Kurt Cobain was a canary in the coalmine, as was David Foster Wallace. You and I are still in it, and it’s getting harder to breathe.

“Kurt Cobain: Montage of Heck” opens this week in Los Angeles, New York and Seattle, and then premieres May 4 on HBO.