“Being good at your job isn’t enough”: A new documentary looks at the history -- and future -- of women in tech

"CODE: Debugging the Gender Gap" shows how far we've come -- and how far we have left to go 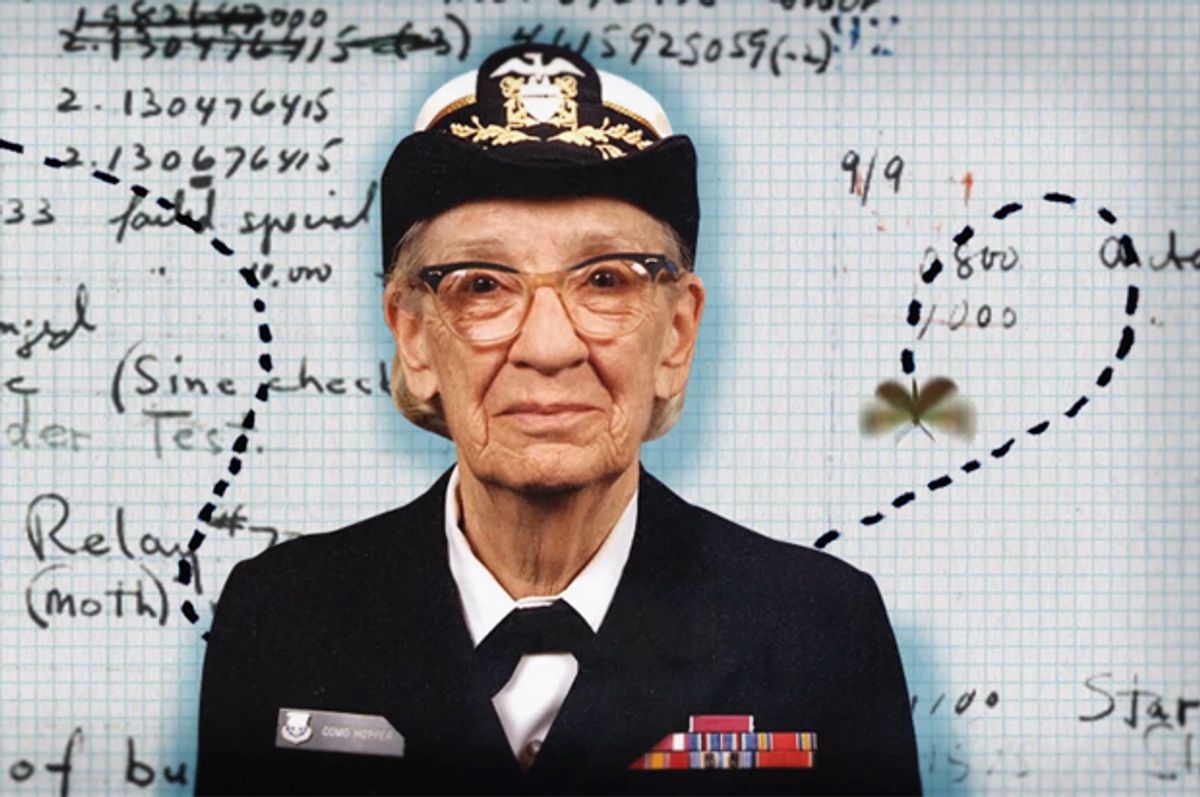 Grace Hopper pictured in a still from "CODE: Debugging the Gender Gap"
--

There is a lot of information out there right now about education and the problem of the “pipeline” when it comes to increasing diversity in tech. A growing number of people are talking about work culture and the kind of networks that connect candidates to jobs in a field that venerates “white, male nerds who’ve dropped out of Harvard or Stanford” at the expense of virtually everyone else. These are major steps forward from even four or five years ago, but progress remains slow.

And one thing that becomes clear after watching “CODE: Debugging the Gender Gap,” a documentary that screened this week at the Tribeca Film Festival, is that the problem is much bigger than the pipeline of computer science majors. If you’re wondering why there are so few women -- and particularly so few women of color -- in tech, start by looking at the messages kids are getting as early as elementary school.

The film opens with a bunch of young girls talking excitedly about, and messing around with, computers. “We can pretty much do anything they can do,” one says of her skills. But when a voice offscreen asks another group of girls if they imagine a coder as a man or a woman, they barely hesitate before saying "man."

The answer might disappoint, but those girls are calling it like they see it. Women earn 57 percent of the college degrees issued in the United States, but only account for 18 percent of computer science degree recipients. The archetypal nerd entrepreneur of our popular imagination is generally a white guy wearing a hoodie and drinking Coke in a basement (or startup garage office!) while plugging away at some string of code. Nathan Ensmenger, an associate professor in the School of Informatics and Computing at Indiana University who was interviewed in the film, refers to this messaging as “stories we tell about who belongs in the industry.” And these are the stories that girls internalize.

But the aloof male coder genius is a bit of a sinister fiction, a narrative popularized over the last few decades. In order to put current disparities in tech into larger context, “CODE” provides a fascinating look at the history of women in computer science. A history that they have been written out of.

Take Grace Hopper, a foremother of computer science that you’ve maybe never heard of. (At least I hadn't, and I love learning about pioneering women with excellent taste in hats and glasses.) Hopper, who passed away in 1992, was a rear admiral in the United States Navy who worked on the first computer and led the team that created COBOL, a programming language that is still used today. (Hopper is also credited with one of the most famous usages of the term “bug” to describe a computer glitch after discovering a moth inside the Harvard Mark II.)

But Hopper isn’t the only woman largely erased from the record. Ada Lovelace, a 19th century mathematician, was credited with writing the instructions for the first computer program. “CODE” breaks down how women were written out of the history of a machines that defines so much of their lives to help viewers understand that the exclusion of women from tech and the male-centric narrative about the development of computers isn't just offensive, it's downright ahistorical.

In order to fill out the contemporary picture, director Robin Hauser Reynolds interviewed female tech luminaries like Meghan Smith, CTO to the United States, to talk about their experiences coming up in the industry. Colleen Lewis, an assistant professor of computer science at Harvey Mudd College, spoke of the “extra work” of fighting preexisting biases, as if any small mistake is confirmation that women don’t belong. And Julie Ann Horvath, a former GitHub employee who made waves last year after going public about what she described as a culture of harassment at her former job, said she felt like “being good at your job isn’t enough” if you’re a woman in tech.

Another remarked that she felt conflicted over encouraging other women to get into tech knowing what she’d been through -- and what they’d likely go through, too. “It’s hard with a good conscience to encourage women to come into a field that will sexually harass you and not fund you,” said Bethany Macri, a software engineer at Etsy, one of the few success stories in the industry.

Etsy managed to increase the number of women coders on its team from 3 percent to 30 percent in just a few years by -- wait for it -- investing considerable time and resources into debugging the problem. And that's the other message in the film: the problem won't be solved by women's bootstrapping. Instead, nearly every woman (and man) interviewed in the film emphasized the importance of bringing computer science into public schools and forcing companies to change how they operate in order to identify, mentor and retain women coders.

This is one thing the film makes remarkably clear, even to a novice like myself: code is essential to basically every aspect of our lives. Leaving the industry in its current sexist shape doesn’t just hurt women who can and should code, it hurts anyone who uses these tools in their daily routines. (Spoiler: that means you.) Progress has been slow, but it seems that more and more people are recognizing the urgency of the problem. Or as another senior developer at Etsy put it: “Whatever it takes to move that number now, we have to do now.”