Bobby Cannavale on his offbeat roles: "The weird f**ked-up friend is more interesting than the lead" 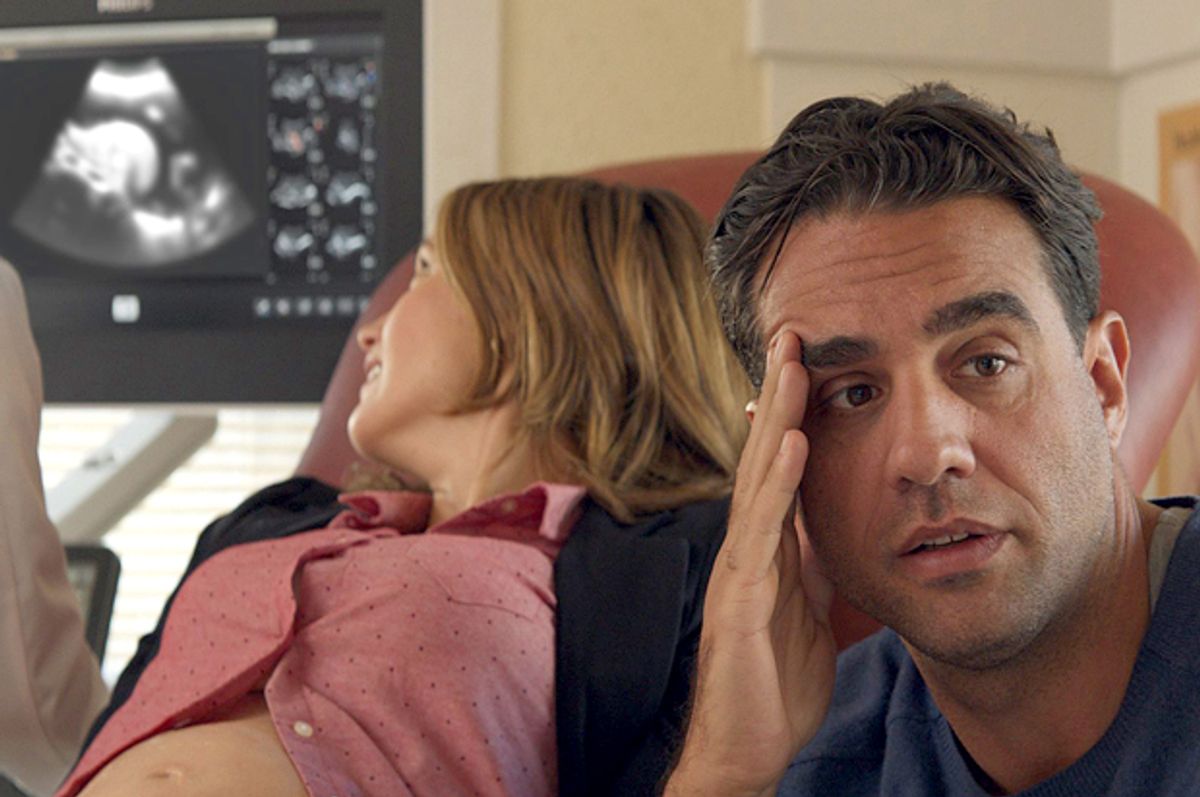 Bobby Cannavale is one of those scene-stealing character actors who enlivens every film he is in. While he’s been working steadily in films, theater and TV, it was his breakout role as the motormouth Joe in “The Station Agent” that got him on most fans’ radar. The actor has distinguished himself again playing two very different father roles in cinemas now. In “Danny Collins,” he is Tom Donnelly, a New Jersey husband and father, who has an unexpected and unwelcome reunion with his absent dad, title character (Al Pacino), who's a famous singer. In “Adult Beginners,” Cannavale plays Danny, who is expecting his second child with his wife, Justine (Rose Byrne), when her brother Jake (Nick Kroll) crashes in their home after a professional meltdown.

Cannavale spoke about his work ethic, playing fathers and desperate characters, as well as acting alongside his girlfriend, Byrne.

Bobby, you pretty much never stop working. How do you maintain the energy to do it all, and do it so well?

Every actor just wants to work — especially after years of auditioning and not getting work. I didn’t stop working in a bar until I was 29. I was at it [auditioning] for a long time. You just want to keep working. It makes me happiest. I have a good work ethic because I come from a long line of people with steady jobs. I’ve been lucky to get good material and roles to sink my teeth into.

You often display a wry comic timing. There’s a great moment in “Adult Beginners” where Danny makes a joke about blazing up while his wife is in labor. How do you make your characters ingratiating, even when they are misbehaving?

I lived in New York City for 22 years, and I come across all kinds of people. To survive in New York City, you need a thick skin. You accept all kinds of people, and they are filled with insecurities. I’m drawn to complicated and messy characters. I’m bored by people who have all the answers. Desperate characters who have a secret are my favorite ones to play. Or guys trying to get to someplace they’re not. So every character I play, I draw on my own insecurities and exploit that. Take “Boardwalk Empire.” There are not many people who would have much in common with Gyp Rosetti, but I had a lot in common with that guy. That’s what makes actors in certain roles compelling — that struggle to fit in in a world that is hard to navigate. On the surface, Danny in “Adult Beginners” has it all, but goddammit, he doesn’t want to grow up. I have friends having kids later in life, and they struggle with that. Do I have to fully grow up or can I still fuck around? Nick is a buddy he can get stoned with and slack off a bit. When I read it, this guy was familiar to me.

What can you say about being a father yourself and how it informed playing Danny in “Adult Beginners”?

I became a parent when I was 24, and my son Jake is almost 20 now. I was working in a bar and terrified. Yet when my son came, I naturally took to it. There was a moment in my life when Jake was 2, and I was working in a bar, and I considered finding a career. Luckily I was talked out of it. That’s what drew me to the script for “Adult Beginners” — that question of what does being an adult even mean anymore? These characters are struggling with that. Danny is at a real crossroads. He has the pressure to provide for his family. When Danny says to Nick, “Look, I’m tired of not being seen in my own house,” I’ve felt like that, and I know people who have felt like that. He justified his actions to himself. He just wants to be seen.

From being a father to being a son: That final scene between you and Al Pacino in “Danny Collins” is extraordinary.

We didn’t plan that. It was interesting. Al and I had conversation before and during shooting — because I just worked with him before the film on a play. We are both admirers of the kinds of films with no easy resolution. The final scene opens the door for these characters a little bit. Tom is a guy in a circumstance where he’s afraid, and he has the one guy with him, his father, showing up for him. In that moment, Tom’s father putting his arm around his son is a reaction. That touch speaks volumes. It happened in the moment. I was quite pleased with it. It’s like the end of “The Station Agent.” I like that ending, too. We don’t know what’s going to happen with those characters either, but they are [together] in the moment for one brief moment.

What observations can you make about your own dad?

My dad won’t wear dungarees. But nowadays you see 65-year-old men in True Religion and Converse.

You are in a relationship with your co-star Rose Byrne. Did it affect your relationship to play a couple with marital tension in “Adult Beginners”?

No. Not at all. I’m in love with my girlfriend. We did three movies back to back to back last year: a kids’ musical [“Annie,”], “Spy” [forthcoming] and “Adult Beginners.” We joke that if we didn’t know each other, we would have met on these films. Why wouldn’t I want to work with her? She’s brilliant and unpredictable, and can play so many things. In this business two actors have to spend a lot time apart so working together for a year was a no-brainer.

I love the line Danny has in “Adult Beginners” that “everyone wants comfort.” What provides comfort to you?

Gosh, the company of the people I love, my girlfriend, my son, my good friends. I have really good friends I’ve been with for many, many years and like to be around. That’s why I love to live in New York City. I’m surrounded by people. I like that.

The siblings in “Adult Begnners,” Jake and Justine, fear swimming. It’s a metaphor for them being afraid to stand on their own, be independent and grow up. What are you afraid of?

Not working. That’s the realm of the artist. An artist not working feels insignificant. We do our art for ourselves, but it is larger than that. If not working, I’m not contributing, and that’s scary to me.

Would you ever want to reinvent yourself? Do you have plans to write or direct?

I’ve been doing theater for years. I didn’t do a play this year, but I did a play every year for the past 15 years. I love to work on stage, and it scares me I haven’t done a show this year. I like to challenge myself to do something I’ve not done before. I’m not into doing what I’ve done before. After “Boardwalk Empire,” had its run, I read so many mafia scripts.  But for me, I want to keep challenging myself, and it’s exciting when I see something and say, “I don’t know if I can do that,” and I’m probably going to do that.

What about being a character actor versus being a lead? Do you feel freer, or less pressure not to have to carry a film, or “open” a movie?

I don’t think about it. I like being a part of an ensemble and I’m attracted to character actors. The weird fucked-up friend is more interesting than the lead. You can do unorthodox things with that character. I’m not turning down leads, but the ones I’ve been offered are not that interesting. When I think of great supporting roles, I think of Samuel L. Jackson in “Jungle Fever.” He was the best part in the movie! I also like walking around in my neighborhood and taking the subway. I don’t mind being “that guy.” When people realize it’s me, I’ve usually passed them by. All the [trappings] involved with being a leading man are not necessary for me. I prefer offbeat projects. Having said that, I’m about to start a new show for HBO, “Rock ‘N’ Roll,” and it’s a lead. It’s an unbelievable and complicated and complex character — a classic antihero.

Can’t wait! You always bring such an intensity and energy to your roles. What is your secret?

Luckily, I hung around enough and didn’t give it up. My life experience gave me ammunition to convey that. I’m grateful. At 45, I’m getting my first lead — not unlike Jimmy [Gandolfini] with “The Sopranos.”