"It's only fair that men should have it all": Skewering the myth of "reverse sexism" in Hollywood and beyond 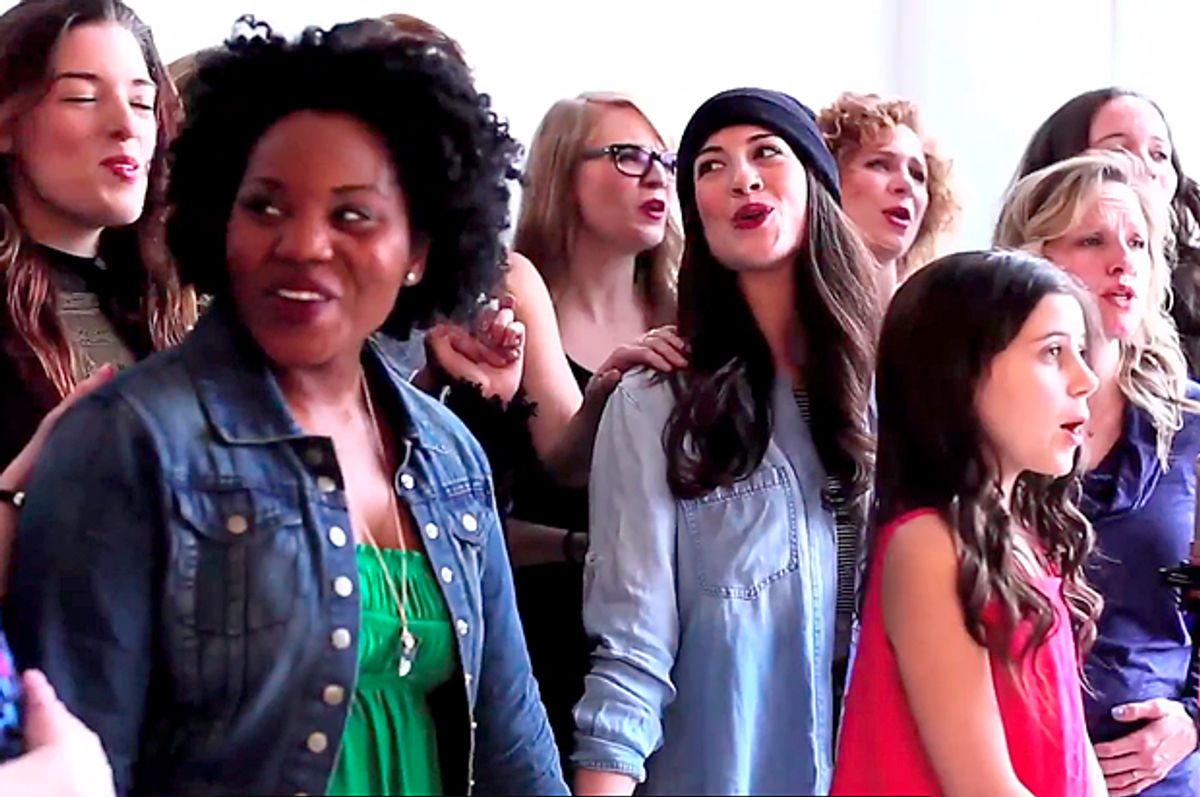 The solemn looking women — over seventy them — have a serious message about a problem that's just not going away. And they've got the ominous statistics to back their warning up. As the vaguely folksy guitar music of their PSA strums and the ladies wince into the camera, they give the hard, cold facts. "In the past few years, only 93 percent of popular films were directed by males," they explain. It gets worse. "Women only get to be naked in films twice as often as men do. And in 2014, only 88 percent of box office hits featured a man in the leading role… Out of thirteen new plays on Broadway last year, only thirteen were written by men." The women point out that this is not a problem that only affects the entertainment industry either. Did you know that men only make up 95 percent of Fortune 500 CEOs? There's a song, too, that reminds us "It's only fair that men should have it all." It's some sobering stuff.

We are in the throes of a creeping crisis in the entertainment industry, and as Fox's Steve Doocy recently pointed out, "It would be nice for Hollywood to have more male figures in those kind of movies as heroes." Breitbart reported just last month, "The real 'everyday sexism' is against men," and an InfoWars piece on the ways in which "masculinity is under attack" from last year noted that "Today’s entertainment industry routinely portrays men as clueless and bumbling oafs at best (think Homer Simpson, Everybody Loves Raymond, Married With Children) or at worst as aggressive sexual predators. Since advertising is primarily aimed at women, men in commercials are also now routinely depicted as either being emasculated losers or stupefied morons." Yes, when will this madness end?

Women are becoming increasingly immune to masculine tone policing of their crazy demands for fact checking in "journalism." They are increasing their ridiculous demands to close the so-called "wage gap" that allegedly affects women in every profession, in every state, and supposedly adds up to a nearly half a million dollar income difference over the span of a career. And they're getting super uppity about the revelations that stars like Amy Adams and Jennifer Lawrence have been paid out less than their male costars. Something needs to be done, before the women take over.

In its debut message, the Make It Fair project says its goal is to "call for gender equality in the stories we tell, the wages we earn, and the future we shape." Wait, this isn't a covert feminist thing, is it? Nah, women couldn't pull that off. I just can't believe that they found that many women, including Rita Wilson, Jessica Hecht and Mamie Gummer — whose mother seems to have some connection to show business by mentoring older female screenwriters or something — to get together to make up the cast. I mean, they can't even get one woman to lead an action or superhero franchise. Good luck in fostering dialogue and raising awareness, ladies. We might be able to stamp the threat of gender diversity and pay equity in our lifetime yet.

#makeitfair from The Make It Fair Project on Vimeo.