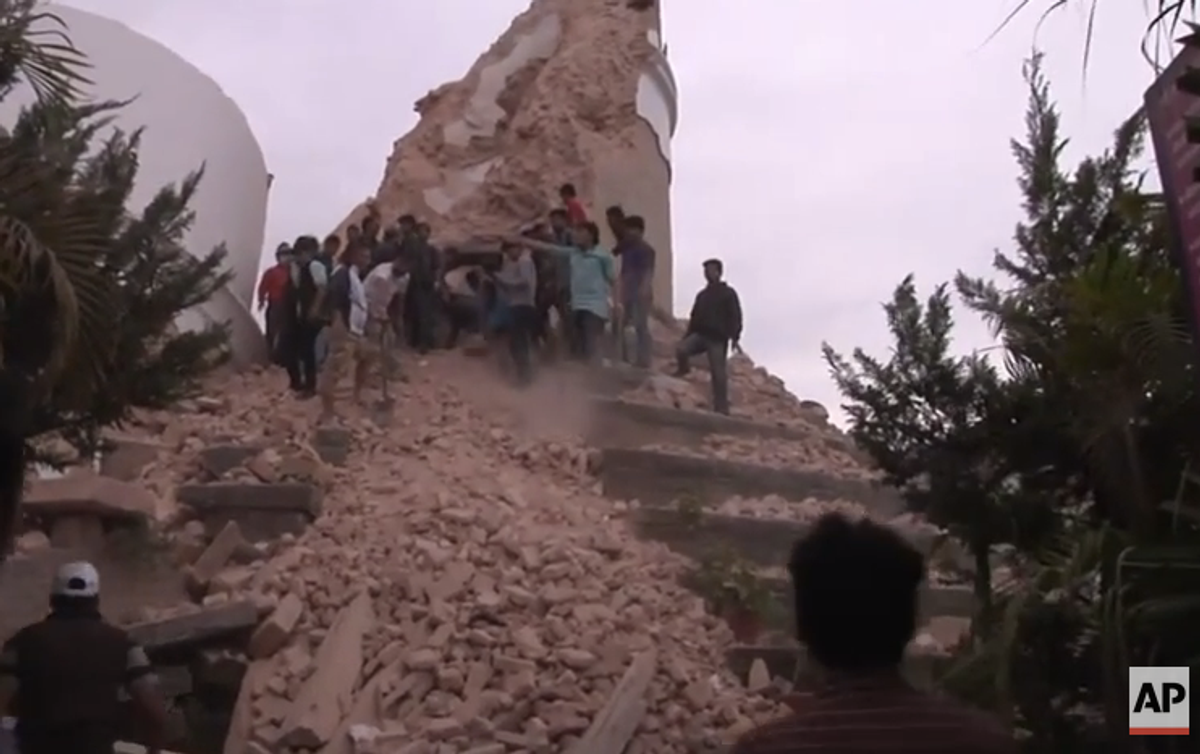 KATHMANDU, Nepal (AP) -- A powerful earthquake struck Nepal Saturday, killing at least 718 people across a swath of four countries as the violently shaking earth collapsed houses, leveled centuries-old temples and triggered avalanches on Mt. Everest. It was the worst tremor to hit the poor South Asian nation in over 80 years.

At least 688 people were confirmed dead in Nepal, according to the police. Another 20 were killed in India, six in Tibet and two in Bangladesh. Two Chinese citizens died at the Nepal-China border. Given the scale of the destruction, the death toll is almost certain to rise, said Home Ministry official Laxmi Dhakal.

It was a few minutes before noon when the quake, with a preliminary magnitude of 7.8, began to rumble across the densely populated Kathmandu Valley, rippling through the capital Kathmandu and spreading in all directions -- north toward the Himalayas and Tibet, south to the Indo-Gangetic plains, east toward the Brahmaputra delta of Bangladesh and west toward the historical city of Lahore in Pakistan.

A magnitude-6.6 aftershock hit about an hour later, and smaller aftershocks continued to jolt the region for hours. Residents ran out of homes and buildings in panic. Walls tumbled, large cracks opened up on streets and walls. Towers collapsed and clouds of dust began to swirl all around.

Within hours, hospitals began to fill up with dozens of injured people. Many came to the main hospital in central Kathmandu. Among them was Pushpa Das, a laborer, ran from the house when the first quake struck but could not escape a collapsing wall that injured his arm.

"It was very scary. The earth was moving ... I am waiting for treatment but the (hospital) staff is overwhelmed," he said, gingerly holding his right arm with his left hand. As he spoke dozens of more people showed up with injuries, mostly from falling bricks.

Following the quake, Kathmandu's international airport was shut down.

While the extent of the damage and the scale of the disaster are yet to be ascertained, the quake will likely put a huge strain on the resources of this poor country best known for Everest, the highest mountain in the world, and its rich Hindu culture. The economy of Nepal, a nation of 27.8 million people, is heavily dependent on tourism, principally trekking and Himalayan mountain climbing.

A senior mountaineering guide, Ang Tshering, said an avalanche swept the face of Mt. Everest after the earthquake, and government officials said at least 30 people were injured.

Tshering of the Nepal Mountaineering Association said the avalanche occurred between the Khumbu Icefall, a rugged area of collapsed ice and snow, and the base camp where most climbing expeditions have their main camps.

Carsten Lillelund Pedersen, a Dane who is climbing the Everest with a Belgian climber Jelle Veyt, said on his Facebook page that they were atKhumbu Icefall , a rugged area of collapsed ice and snow close to base camp at altitude 5,000 meters (16,500 feet) when the earthquake hit.

He wrote on his Facebook that they have started to receive the injured, including one person with the most severe injuries who sustained many fractures.

"He was blown away by the avalanche and broke both legs. For the camps closer to where the avalanche hit, our Sherpas believe that a lot of people may have been buried in their tents," he wrote in English.

The quake's epicenter was 80 kilometers (50 miles) northwest of Kathmandu, and it had a depth of only 11 kilometers (7 miles), which is considered shallow in geological terms. The shallower the quake the more destructive power it carries, and witnesses said the trembling and swaying of the earth went on for several minutes..

Several buildings collapsed in the center of the capital, the ancient Old Kathmandu, including centuries-old temples and towers, said resident Prachanda Sual.

Among them was the nine-story Dharahara Tower, one of Kathmandu's landmarks built by Nepal's royal rulers as a watchtower in the 1800s and a UNESCO-recognized historical monument. It was reduced to rubble and there were reports of people trapped underneath.

Hundreds of people buy tickets on weekends to go up to the viewing platform on the eighth story.

Video footage showed people digging through the rubble of the bricks form the collapsed tower, looking for survivors.

The Kathmandu Valley is densely populated with nearly 2.5 million people, and the quality of buildings is often poor.

In Kathmandu, dozens of people were gathered in the parking lot of Norvic International Hospital, where thin mattresses were spread on the ground for patients rushed outside, some wearing hospital pajamas. A woman with a bandage on her head sat in a set of chairs pulled from the hospital waiting room.

Doctors and nurses hooked up some patients to IV drops in the parking lot, or were giving people oxygen.

The quake - with the same magnitude as the one that hit San Francisco in 1906 - was about 16 times more powerful than the 7.0 quake that devastated Haiti in 2010.

A magnitude 7 quake is capable of widespread and heavy damage while an 8 magnitude quake can cause tremendous damage.

A Swedish woman, Jenny Adhikari, who lives in Nepal, told the Swedish newspaper Aftonbladet that she was riding a bus in the town of Melamchi when the earth began to move.

"A huge stone crashed only about 20 meters (yards) from the bus," she was quoted as saying. "All the houses around me have tumbled down. I think there are lot of people who have died," she told the newspaper by telephone. Melamchi is about 45 kilometers (30 miles) northeast of Kathmandu.

Residents reported seeing trails of destruction -collapsed walls, broken windows and fallen telephone poles - as they drove through the capital, along with streets filled with terrified people.

But scattered reports also indicated that most buildings in the capital did not collapse.

"It's too early to make any assessment but the damage isn't as bad as it could have been," said Liz Satow, the Nepal director for the aid group World Vision. She said she drove from Kathmandu to the nearby town of Lalitpur and said that while there was considerable damage, most buildings were still intact.

Nepal suffered its worst recorded earthquake in 1934, which measured 8.0 and all but destroyed the cities of Kathmandu, Bhaktapur and Patan.

The sustained quake also was felt in India's capital of New Delhi and several other Indian cities.

India's Prime Minister Narendra Modi called a meeting of top government officials to review the damage and disaster preparedness in parts of India that felt strong tremors. The Indian states of Uttar Pradesh, Bihar and Sikkim, which share a border with Nepal, have reported building damage. There have also been reports of damage in the northeastern state of Assam.

© 2015 The Associated Press. All rights reserved.