Sure, Whedon's $250 million superhero sequel is a fun, forgettable summer spectacle. Wasn't he aiming for more? 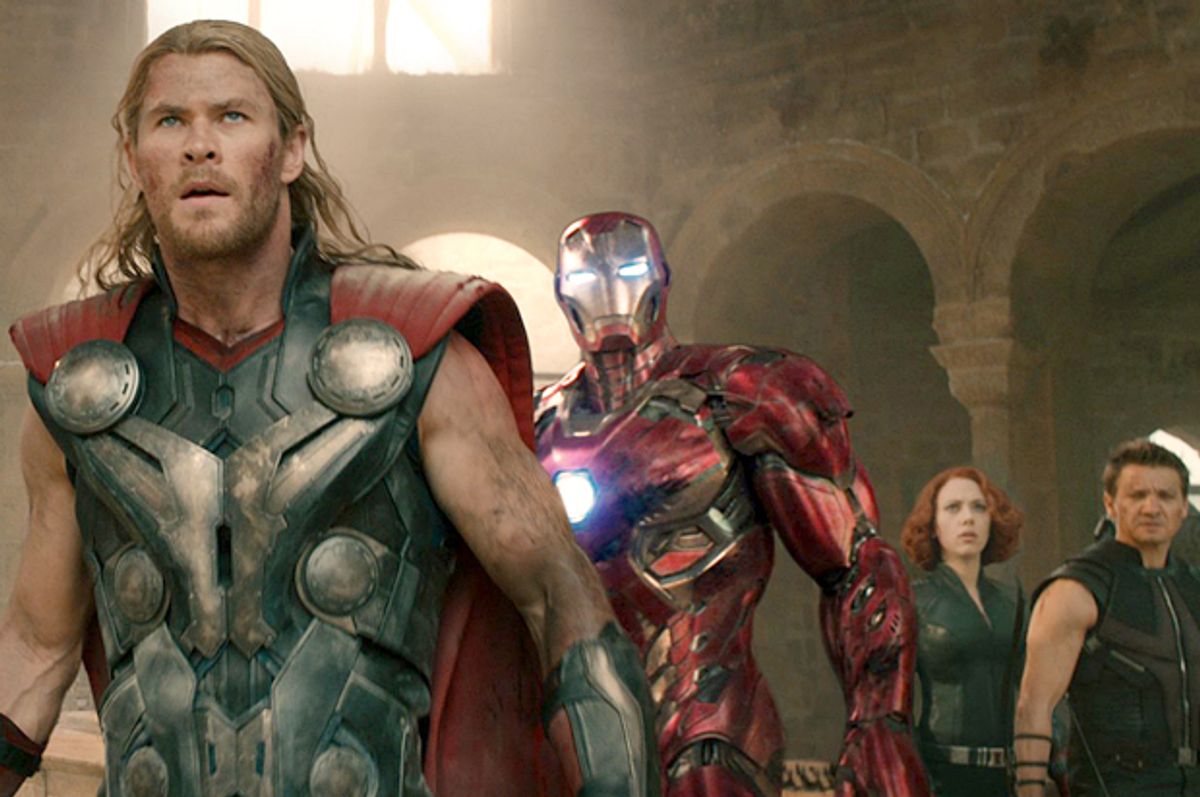 So Joss Whedon, TV cult hero and creator of the Buffyverse, has spent most of the last five years engaged in immensely lucrative struggle with a Marvel Comics mashup franchise. Toward what end, I am genuinely not sure. I have tried to take the question seriously: I went back and watched “The Avengers” again, and now I have seen its sequel, “Avengers: Age of Ultron,” also written and directed by Whedon. It’s a high-spirited, action-packed, overly long adventure movie in which the all-star team of Marvel superheroes takes on a guy called Ultron. OK, he’s not a guy, exactly; he’s one of those ill-fated creations of human genius who redounds upon his creators, after the fashion of Dr. Frankenstein’s monster and HAL 9000 and so on. Anyway, Ultron is deliciously voiced by James Spader, and like every pseudo-demonic villain in this kind of discount-store mythology, he yearns to perfect the human race by exterminating it.

Yeah, we’ve been there and done that, many times over. Such is the essential and insuperable problem of the 21st-century summer tentpole movie – for Hollywood purposes, the first buds of May now count as “summer” – and such is the challenge Whedon has set himself. How much distinctive or idiosyncratic flavoring can an individual writer and director impart to a set of characters as well defined as this assemblage of Marvel superheroes, and to a story that must progress from original sin to existential crisis to redemptive action climax, with very little room for variation? There is honor to this quest, and maybe even a kind of selflessness – if work whose craftsman is paid millions can ever be called selfless. Whedon is trying to meet the expectations of comic-book fans head on, and satisfy them in full, while proving to them and to us that these movies – the fundamental economic basis of the American film industry, at this point -- don’t have to be careless and juvenile and entirely bereft of psychological insight and adult emotion.

This may be a perverse response, but I enjoyed “Age of Ultron” more than its predecessor, despite the fact that it’s almost exactly the same thing. This was probably a result of adjusting my expectations: I wasn’t sitting there waiting for Whedon to revolutionize the genre, or to turn an overdetermined comic-book movie into a Noel Coward comedy. He delivers a clean and capable entertainment, with a handful of distinctive flourishes stuck to the margins. Whedon does well with the darker edges of Robert Downey Jr.’s Tony Stark (aka Iron Man), an arrogant tech genius whose degree of repentance for his war-criminal past is always ambiguous. He adds sparkling notes of screwball comedy, and even tragedy, to the incipient romance between Scarlett Johansson’s Black Widow and Mark Ruffalo’s Dr. Bruce Banner (who, like so many lovable men, has a big, green, ugly side).

Once we get to the supposedly climactic showdown with Ultron the movie is pretty boring; how many ways are there to threaten the planet with CGI destruction and then CGI-save it? Whedon’s complicated setup, however, offers intriguing hints of subtext. (I could write the same two sentences about almost any superhero movie.) I’m never quite sure how to feel about Hydra, the nemesis organization in the Marvel universe, at least as it appears in Whedon’s movies. Of course Hydra is thoroughly despicable and all, but its old-world, pseudo-aristocratic Nazi steampunk vibe has a romantic allure totally absent from the sanitized, corporate headquarters of the Avengers, who are pretty much the secret police of the capitalist world order.

When the Hydra-engineered mutant twins later to be known as Quicksilver and Scarlet Witch show up (played by Aaron Taylor-Johnson and Elizabeth Olsen, respectively), bearing a well-earned grudge against the Stark empire and the Western and/or American war machine, I was on their side firmly and immediately. They are too awesome not to be coerced or compelled into switching to the Avenger team ultimately, and while I understand why that’s necessary in terms of future sequels and the coherence of Marvelology, I wasn’t happy about it. There is no third way in a comic-book universe, no eccentric path that does not lead you to one or the other Manichaean pole. Resistance is literally futile.

Whether or not Whedon’s extended Marvel career bypass was worth doing – how do we even begin to answer that? “Avengers: Age of Ultron” will probably be the second-biggest Hollywood release of 2015 (after the J.J. Abrams “Star Wars” relaunch), so the answer provided by the Invisible Hand of the market would seem clear enough. But beyond the brutish fact of a worldwide billion-dollar gross, or whatever it may be, lie other facts more difficult to decode. As a cultural and commercial artifact, “Age of Ultron” represents the way that Hollywood’s role in the global economy has been altered or transformed. You could even say that its immense success, or at least the specific character of that success, tells us something about the diminished cultural role of cinema.

This is a gigantic movie, by anyone’s definition. It cost something like $250 million to make and should deliver a handsome return on that investment. It has a passel of stars playing archetypal figures: Downey, in what may (or may not) be his final turn in the Iron Man suit, Johansson and Ruffalo, Chris Hemsworth as Thor, Chris Evans as Captain America and Jeremy Renner as Hawkeye, who gets a whole bunch of screen time that doesn’t quite pay off. It will be the No. 1 box-office hit in virtually every country that has movie theaters and diplomatic relations with the United States. People in Iran and Yemen and Somalia and North Korea will watch pirated copies on the Internet if they possibly can.

To some extent, the presence of a well-respected and high-integrity auteur like Whedon mitigates the ambivalent atmosphere of calculation, condescension and cynicism that surrounds so many nine-figure Hollywood productions. The “Avengers” franchise is more than a huge cash grab aimed at the collective Id of the world’s 17-to-24-year-old males. It’s mythic; it’s “ambitious.” No one involved needs to apologize to their artsy friends, or to feel that the renovated hillside mansions and terraced swimming pools and BMW 6 Series convertibles of Los Angeles County were paid for with slightly dirty money, the way they might after a Michael Bay movie.

But this is a big movie whose cultural ripple effects are very small. Much of the anticipation for “Age of Ultron” is meta-anticipation – how big will the opening weekend be? – and I feel no coming groundswell of media thinkpieces or social-media debates or doctoral dissertations in embryo. I don’t dispute that lots of people around the world will flock to see this movie, and I imagine most of them will have fun. I had fun myself, except for the whole thing about realizing that I was not-so-secretly rooting for Hydra and basically concluding that the Avengers are a fascist front group disguised by so many ideological switchbacks that we lose track of their core identity.

No doubt there are circles where every detail of Whedon’s augmentation to the Marvel canon, or his heretical departures therefrom, will be earnestly discussed. But for most people there isn’t that much to talk about, after you’ve seen “Age of Ultron,” except how cool it was and which jokes maybe fell a little flat and whether giving Renner’s character all that oxygen felt more like a dutiful setup for the next chapter than anything else. The text of the film, if you’ll forgive the phrase – its story and its themes and its succession of scenes – is deliberately unsurprising and largely irrelevant. We’re a long way from the kind of Zeitgeist-engorged Hollywood spectacle that appears to distill or refract a larger cultural moment, the way that Tim Burton’s 1989 “Batman” or Sam Raimi’s post-9/11 “Spider-Man” or Christopher Nolan’s first and second “Dark Knight” films did. This movie is fine, honestly. I rather liked it

Even Joss Whedon, an undoubted pop-culture genius, cannot create that kind of significance from whole cloth, at least not after two dozen or more generally similar superhero movies have worn out the cultural resonance of the form. It would be foolish for me to sit here in a tweed jacket with leather patches on the elbows and proclaim that the era of the comic-book movie is coming to an end. That’s not happening anytime soon (and anyway I threw that jacket away). It might be accurate to say instead that superhero cinema has reached a decadent plateau, a long-term steady state of self-nourishing bigness and reverberant meaninglessness. Whedon moves on from the Marvel empire not as its Augustus or its Spartacus, but more like one of the later, non-terrible Christian emperors who won some battles, made some reforms and convinced everybody that the glory of Rome would endure forever. Was it worth doing? That depends on what you think of Rome.