"Mad Men" recap: "Enjoy the rest of your miserable life" 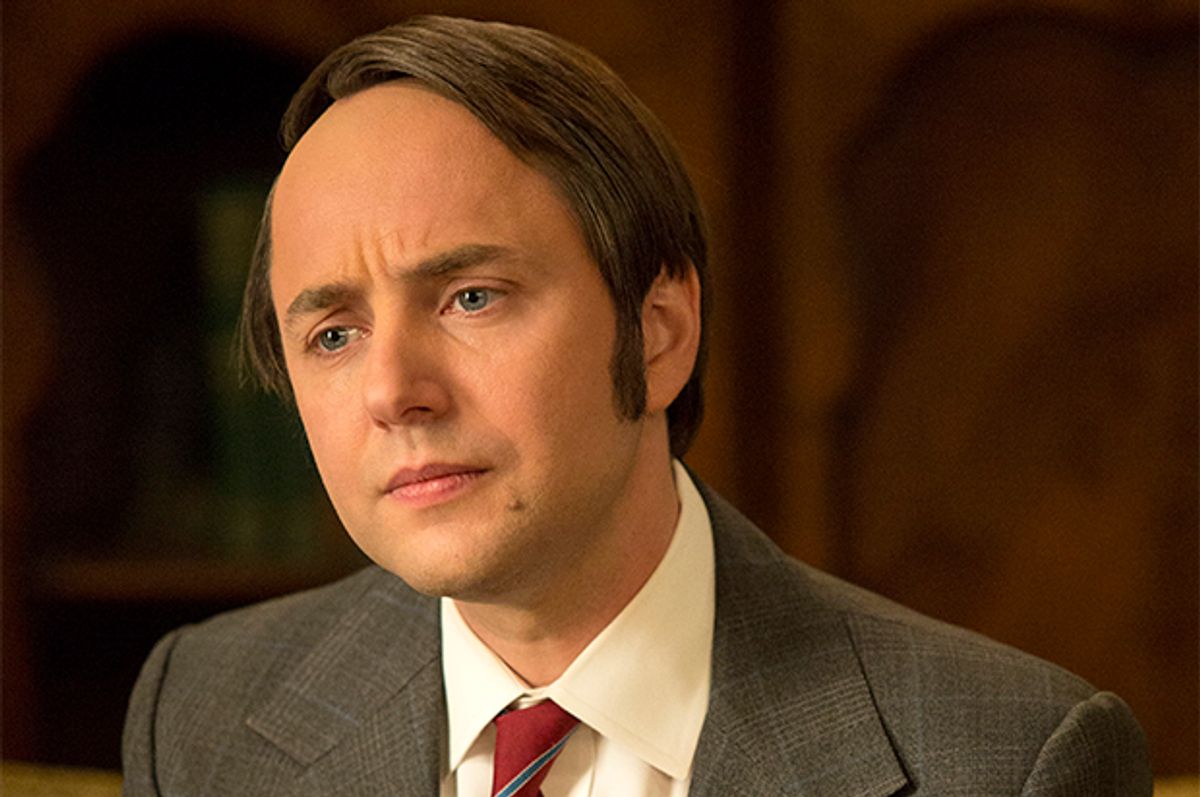 “Time & Life” is an episode about symmetry. The symmetry is in the title, those two four-letter, slant-rhyming words that could be interchanged—life and time, time and life. It’s in the bicoastal balancing act that the five remaining partners of Sterling Cooper & Partners is desperately trying to sell McCann Erickson. And it’s in the framing of shot after shot, starting with Pete obscured by a waiter as Ken drinks wine at a restaurant, moving through Peggy and Pete on a couch, Pete and Trudy on a couch, the five partners in the McCann meeting room, Don and Ted sitting at the SC&P conference table. The shots in this episode are gorgeously composed—a combination of cinematography and production design that makes extraordinary use of color, shape, blocking and furniture. This is an episode of “Mad Men” that is pulling the full weight of “Mad Men,” and the results are fabulous.

In order to create symmetry, you have to approach a situation head-on. That’s how the camera creates those fantastic shots; that’s also how the characters approach “Time & Life,” an episode built on the corporate drama that “Mad Men” tells so well. The five partners remaining discover that McCann is planning to fold SC&P into the parent company—and they go to the mattresses, to use the term from “The Godfather.” The episode moves forward on the galvanic energy of their mission, which is to create an office in Los Angeles. But the plan in which they pour their dreams and energy ends up being an elaborate, detailed red herring: McCann sees this folding as a privilege for the partners (especially the male ones). The head-on approach crashes and burns—symmetrically, of course. The last shot of that scene is the most perfectly composed shot of all—the five partners, with four chairs facing them, backed by a wall of floor-to-ceiling windows. The vertical lines between each pane of glass frame each partner in their moment of failure. Three lights hang down from the ceiling, in evenly spaced columns. Don, as the tallest, takes up the center of the five chairs; the two mustachioed men, Roger and Ted, are on either end. A blue ashtray, awkwardly large, sits on the table in front of Don. The only point of dissonance is a lamp, placed off to the left behind the partners—but even that dissonance is calculated, an eyelinered-on mole next to a Marilyn Monroe pout. The shot is so perfect, indeed, that it’s freeze-framed. Like a photograph of a mushroom cloud.

There is a symmetry, too, in this episode addressing the end of SC&P’s era in the Time-Life building: We saw the company move in, at the beginning of Season 4, and then expand to a second floor, at the end of Season 5. And that decision gave us this shot, of five (somewhat) different partners, looking away from us, toward a more promising (and ultimately fantastical) future.

As I was saying, symmetry. At one point, Stan admires it: “How did that turn into that?” he asks. Even Lou Avery, Don’s doppelganger on the other coast, calls in to remind Don of the parallelism of the two of them, except that he, Lou, has come out ahead. “Enjoy the rest of your miserable life,” he spits, before slamming the phone down. In that scene, as in numerous others in this episode, splashes of red color the frame’s palette.

An old theory of mine regarding “Mad Men” is that certain characters act as unconscious mirrors of others. Peggy and Pete, for example, are almost diametrically opposed characters—ones that found enough common ground to hook up a few times and create a baby, yes. You know who else did that? Roger and Joan. There’s an enormous gulf between these two pairs of characters, and yet in between it, for both, there’s a surprising amount of shared experience—and shared DNA, at this point. This episode nodded to both of those pairings, in what seemed to be like a very deliberate reference back to the early seasons of the show. Pete saw Peggy with a child hugging her knees, and the look on his face was a kind of hopeless despair. Roger whined when Joan left to see her new beau, and then said morosely to Don that now that the company was losing its name, nothing would bear it—he has no (legitimate) sons. But then Joan leaned her head on his shoulder, when the bad news came, and Pete told Peggy she deserved to know about McCann. Neither pairing ends up happily ever after—it seems totally impossible, for both—but they’re still able to reach each other, from time to time. Indeed: Peggy would not have told Stan about the son she gave up for adoption if Pete had not looked at her that way.

And moments of bittersweet triumph like that are all this episode has to offer against what is a lot of unyielding sadness. The firm is over; the thing these people have spent their lives building is over. It’s not-so-subtly a metaphor for the show, “Mad Men”—this vehicle that has been the product of so much work is now ending, too.

But it’s also sort of perfect, for these workaholics who have made work their whole meaning, for these people who bought, hook line and sinker, the vaporous myths of capitalism that they sold on the regular to their unsuspecting clients. It’s only the people who have lives outside work who will make it through this. Peggy and Stan may end up leaning on each other, Roger might retire to hang out with Marie, and Ted will finally get his pharmaceutical—but what about Don Draper? The empty falling man in a suit, constructed wholly to sell? “In another life, I would have been your chauffeur,” he says to Roger. Throughout this episode, Don is in his element—the pitchman for a motley crew of partners, preparing for the hardest sell of all, the sell for the right to continue surviving. And he loses. He takes it gracefully, on the chin, but he keenly feels the loss: There’s nothing left. Not even Diana is living in her crappy apartment, working her crappy job. As the episode ends, he stands, in the middle of the five of them again, desperately preaching calm to a milling, panicked company. “This isn’t the end of something. This is the beginning.” They don’t believe him. He doesn’t believe him, not really. And they file out, while he continues to speak, until he is just gesturing at empty air. His fellow partners aren’t listening, either, caught as they are in their own reveries. The symmetry is broken: It’s supposed to be a balanced conversation, but the other side hasn’t shown up. It’s the most pathetic moment for Don yet, in a series that has spent eight years bringing him to new lows. As bad as it is to be a pitchman without a pitch—what good is a pitchman without someone to pitch to?