This anti-gay movie is true evil: What are Rand Paul and Mike Huckabee doing in the vile "documentary" "Light Wins"? 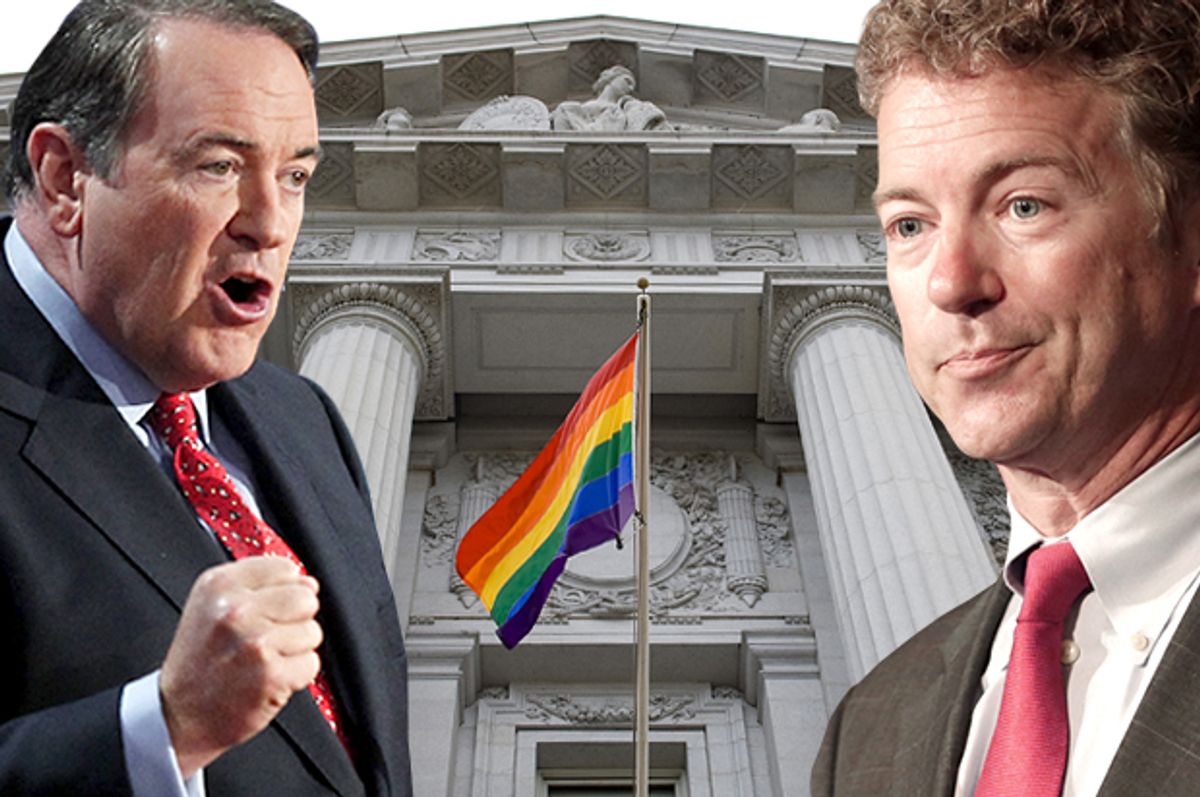 “Prayer, God and his commandments were kicked out of the classroom because they might influence children not to lie, steal and kill.  But ushered into that void was a dark agenda that robs children of their innocence and puts their life [sic] at risk … We now know with the redefinition of marriage comes a state invitation to indoctrinate your child,” says Janet Porter of Faith2Action speaking in her film "Light Wins."

If you actually believe what is said about gay people in "Light Wins" you’d have no choice but to grab a torch and pitchfork and join a Christian mob to drive “homosexuals” into the sea.  The slander against gays is as breathtaking as the ambition and dishonesty of the film.  It first gained notoriety among a wider audience after Right Wing Watch brought attention to some snippets of the film released online.  Those clips come off like a gay version of “Reefer Madness,” that hysterical anti-pot film from the '30s.  I found the clips so absurd, I thought it would be “fun” to buy the whole movie (released in March) and pick it apart.  By the end of this 100-minute misinformation marathon, I was not laughing.  It is as paranoid, dishonest and bigoted a thing as I have ever seen in my life, but it’s also earnest, deeply religious and well organized.

It’s hard to believe such a work could still have any impact, even in the darkest recesses of our superstition-driven society, but the film lays down a step-by-step case on why being gay is “dangerous,” why gays cannot also be Christians and how schools are indoctrinating your children into the “homosexual lifestyle.”  If you could switch off your critical thinking skills, you too could be caught up in the anti-gay hysteria.  It’s easy to dismiss such a collection of bizarre claims, but that’s a mistake.  This movie will damage someone, a gay child in a Christian household, perhaps, or a middle-aged Christian agonizing over his or her sexuality, real people who are too often suffering.

Porter is careful in her movie to avoid slamming individual gay people; instead she leverages the whole “love the sinner, hate the sin” routine.  She uses a lot of roundabout talk about “darkness” and “homosexual acts” and “religious freedom” to mask the cruelty and hate, but the point is more than clear.  “When evil is called good,” Porter says in her opening monologue, “darkness is ushered into the land, and with that darkness comes a threat to our freedoms.”  She equates gay people with the hordes of Sauron but adds a “no offense intended” to make the whole thing seem OK.

As much as I hate to repeat vile awfulness, I have to cite some more examples from the film.  For instance, David Benham compares gays to “adulterers” and “thieves.”  James Dobson, a fundamentalist pillar of cruelty, claims gay marriage could destroy the fabric of society.  John R. Diggs Jr., an actual medical doctor of some kind, likens “homosexual behavior” to bestiality and child sacrifice, all while quoting scripture to back up his insults.  Throughout the movie, the Bible is used less as a book and more as a blunt instrument.

The film features a rogue’s gallery of discredited villains, kooks and bigots, people like Ken Ham, David Parton, Gordon “Court Martial” Klingenschmitt and Phyllis Schlafly, just to name a few.  There are too many to mention by name, although I want to point out that Schlafly takes an extra moment to brag about defeating equal rights for women.  Basically, if you’ve ever said something really stupid and have been called out by Right Wing Watch, you got invited to be in this movie.

Besides the usual suspects, Porter has cajoled some “serious” politicians to appear in the film.  Mike Huckabee courts the terrified Christian vote, and Rand Paul shows up but seems almost confused about what’s being discussed.  There’s a parade of lesser-known politicians, like Rep. Gary Glenn of Michigan who says, “If some young person hears at school it’s OK to be gay, and then comes down with a fatal disease as a result, school officials should be held legally liable.” (Note to Michigan: How in the fuck did you elect this guy?)  Any politician who is willing to stand behind the vile statements in this film has sacrificed all legitimacy.

Perhaps the most troubling aspect of the film is the through narrative that being gay can be “cured.” Many “ex-gays” show up to “testify.” It might be possible for some gay people to abandoned their natural sexual inclinations, fake heterosexuality and marry someone of a different gender.  There are also bisexual people and sexuality itself can be fluid, but I am more than certain that at least a few of the “former gays” in this film are closeted and miserable.  If they choose religion over their own happiness and wellbeing, that’s none of my business, but let’s all stop pretending anyone is “cured.” By continuing to push this debunked theory of “reparative therapy” real people will suffer.

This movie, far from making gays seem bad, makes Christians look petty and cruel.  As an atheist myself, it doesn’t hurt my feelings to see Christianity reduced to such a pathetic state, but I feel a twinge of sadness for sensible Christians, those who might even support gay rights.  Their religion has been hijacked by fundamentalists who’ve turned gay marriage into a battle between the forces of good and absolute evil.  This dichotomy leaves no room for compromise, and Christians of conscious are going to have to find a way to take their religion back or it will be forever diminished.

I do agree with Porter that she has every right to hold and express her opinions.  I don’t like that “Memories Pizza” was run out of business for saying they would not cater a theoretical gay wedding.  Never mind that the premise is nonsense, this understandable but angry reaction adds legitimacy to otherwise outlandish claims of “Christian oppression.”  How can Christians possibly be oppressed when they make up 70 percent of America and 100 percent of all U.S. presidents ever?  For the first time in our history, Christians like Porter have to compete in the marketplace of ideas. Liberals should give religious extremists plenty of rope and let nature take its course.

I corresponded with Porter over email to try to better understand her.  She seems pleasant and earnest but is also delusional.  Her biggest concern is what she sees as a loss of “religious freedom,” a nonsensical idea that gay marriage somehow prevents her from practicing Christianity.  No one likes to be called out and challenged, but none of us is free from criticism over what we say or believe.  As an “out” atheist and an opinion writer, I’ve felt scorn for my beliefs, but that’s real freedom of speech and religion.  Porter is free to say or believe whatever she likes and so am I.  And I think her movie and her particular view of Christianity is hateful, bigoted filth.

I was torn about even reviewing it for fear of giving it attention, but this movie will have consequences.  Some well-meaning Christian family will watch this movie—probably in church—and end up shunning a gay son or daughter.  Unlike the unfounded assertion of “religious freedom under attack,” the epidemic of suicide among gay youths is real, and this film has the potential to make it worse.  It must be reviewed and exposed.

The good news is that Porter seems to be struggling.  I had a hard time getting my hands on the movie.  Not because I planned to analyze it for Salon, but because Porter forgot to send it and then my payment was returned by PayPal because of an error.  When the movie finally arrived, she included a handwritten note apologizing for the confusion and included this extra bit of wisdom: “Praying God uses [this movie] through you to push back the darkness.”  Never in my life did I expect to do the atheist equivalent of “God’s bidding,” but by exposing this ugly piece of shit, I feel like I am pushing back against the darkness.