The American dream goes to hell: How colleges are shutting their doors—and leaving students with the bill

At its height, Corinthian Colleges ran 127 different campuses. Now it's abandoning its students to crippling debt 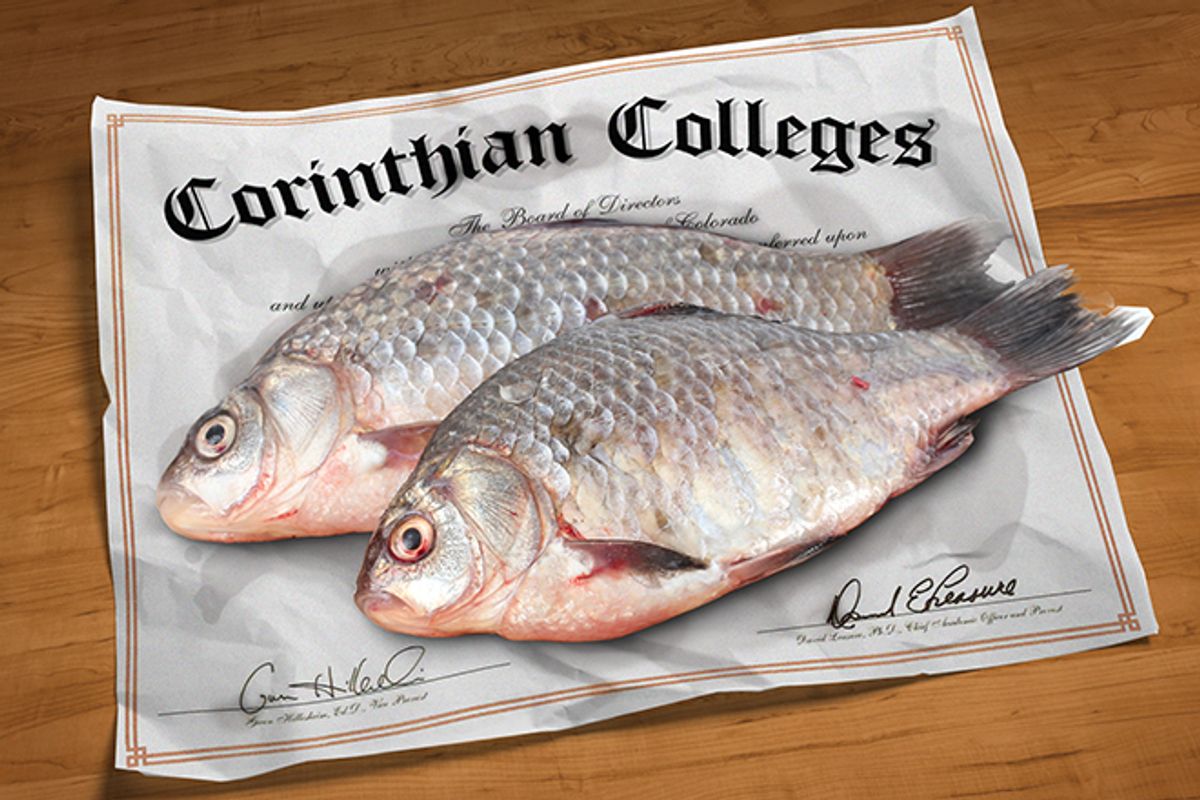 For years, financial-industry mouthpieces warned of the dangers of strategic default, the idea that if you give homeowners relief on their mortgages, they would simply stop paying to get a better deal. This was a great theory, except for the fact that it never happened in large numbers. But we did just see a giant strategic default over the weekend – from a for-profit college.

Corinthian Colleges shut down 30 campuses nationwide on Sunday, abandoning 16,000 students they promised to provide a worthwhile education. As the Institute for College Access & Success points out, while Corinthian was barred from enrolling new students in California on April 17, they were still signing up students at campuses outside the state up until a few days ago.

This had been coming for some time, which makes it incredible that students were still being enrolled. As I wrote for Salon back in March, Corinthian, a conglomerate that ran a total of 127 campuses, with names like Everest, Heald and Wyotech, faced numerous state and federal lawsuits accusing them of lying to students, producing worthless diplomas, and engaging in illegal debt-collection schemes. A couple weeks back, the Education Department slapped Heald College with a $30 million fine for inflating its job-placement statistics to sell students on joining. In one particularly notorious example, “A 2011 graduate of an accounting program at a Hawaii campus was counted as being employed in her field even though her job was serving fast food at a Taco Bell.”

Under the Education Department order, Heald had to plan for the graduation or transfer of all its remaining enrollees. But instead of taking those steps, Corinthian strategically defaulted the Heald campuses, walking away from its obligations. The company claims it will work to place the 16,000 students at other colleges, but it is evident that’s a secondary concern. Given the low esteem of Corinthian, it’s not clear whether any accredited colleges will recognize credits from their students.

But in many respects, these 16,000 students are the lucky ones. That’s because, since their college closed down, they have the option to discharge their student loans. Before absconding, Corinthian sold off another 56 of its campuses to ECMC, a for-profit corporation with no experience in educating students, whose connection to the industry comes mostly from acting as a federal debt collector on student loans. Students with the misfortune of being enrolled at one of those 56 campuses cannot discharge their loans and start over, along with the 41 other campuses Corinthian managed to offload before closing down.

The Education Department has authority, under the Higher Education Act of 1965, to forgive all Corinthian loans. But so far, they have only offered a partial forgiveness, mostly of loans considered uncollectible, and only covering private student loans, not federally issued ones. So if you were duped into wasting several years getting bogus career training at one of these colleges, you have to hit the lottery to get relief. If you have a private loan instead of a federal one, and if you attended the campuses that were shut down instead of sold, and if you resisted the bullying by Corinthian employees to accept a transfer instead of a discharge, then maybe, just maybe, you can get help.

Like Alexis Goldstein says, there’s an eerie resemblance to the HAMP program for foreclosed borrowers. Applicants for HAMP had to basically roll lucky seven at a craps table to receive aid. And while the Education Department bailed out Corinthian with emergency cash, and even brokered their deal with ECMC, they have done too little for students suffering from broken promises and bleak futures. Enrollees at the Corinthian campuses that shut down experienced the same deceptive practices as those at the ones still limping along under new management. The end result is likely to be just as useless for their career paths. But only one of these groups can cancel their debts, no questions asked.

Everyone else is supposed to have a “defense-to-repayment” process, to discharge loans when their colleges commit fraud. But under defense to repayment, they would reportedly need to “prove injury and the amount of his or her loss,” a legal process that could take lots of time and effort and still be open to interpretation. The Education Department would lose money on discharging these loans, and they would be the ones making the determination of who qualifies. They have little incentive to grant relief.

This hurdle for students is especially unnecessary given that the Education Department and other officials have already built a fact pattern around Corinthian’s wrongdoing. And keep in mind that Corinthian, which doubled in size from 2007 to 2011, basically lived off of loans facilitated through the federal government. $1.4 billion in Corinthian revenue came from federal student loans annually.

The red carpet gets rolled out for the fraudulent college, but students face tremendous burdens to get the compensation they deserve.

Six Democratic lawmakers – Senators Elizabeth Warren, Al Franken, Dick Durbin, Jack Reed and Ed Markey, and Representative Elijah Cummings --wrote to the Education Department yesterday in the wake of Corinthian’s collapse, asking how they are informing students of their options under defense to repayment, and why students should have to re-engineer a process of discovering fraud that the Department of Education has already undertaken. “Students should not have to hire attorneys or become private investigators to find out what the government already knows – that they are eligible for student loan relief under federal law,” the letter reads. The lawmakers joined multiple others in demanding student debt relief for students of these crooked institutions.

One hundred and seven Corinthian students have joined a movement refusing to pay their debts until the Education Department cancels them. These borrowers, many of them minorities from low-income households, were sold on the dream of a college education, hustled into diploma mills that had no intention of putting them on a better career path. They don’t deserve disparate treatment simply because Corinthian managed to sell off their campus before skating away with their fortunes.

Education Under-Secretary Ted Mitchell told Bloomberg yesterday that they would reach out to students at the closed-out colleges, and discuss potential loan discharges. “What these students have experienced is unacceptable,” he said in a blog post. That’s right – and it’s just as unacceptable for the tens of thousands of students who didn’t happen to see their college close down this weekend.