A destructive company moves in a constructive direction 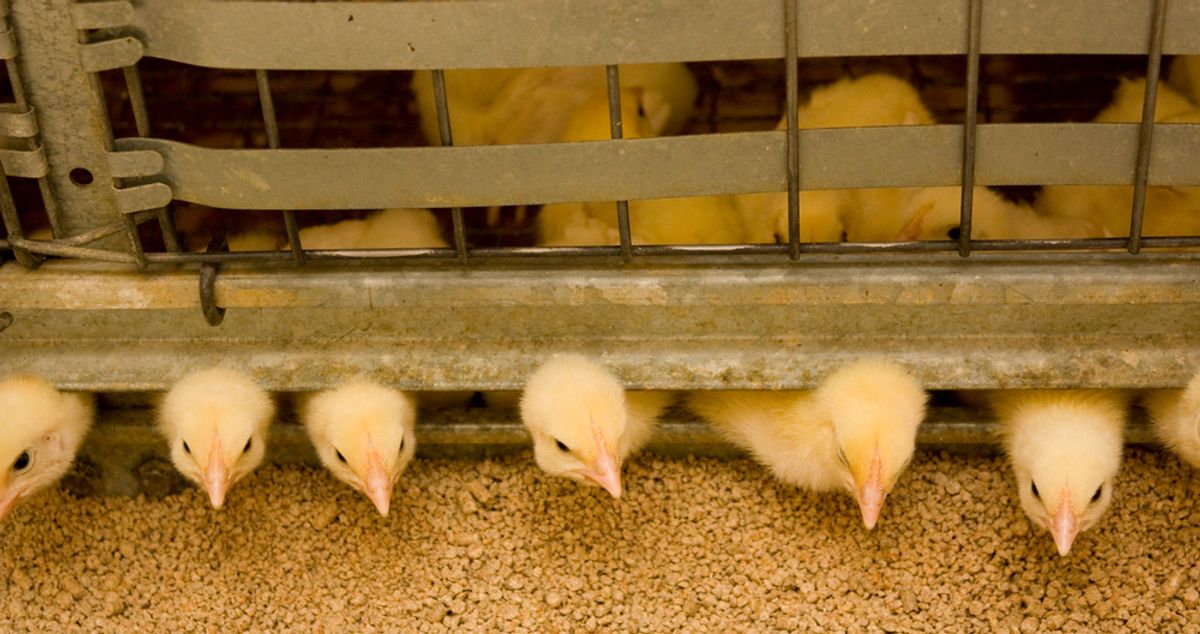 Tyson Foods, the nation's largest poultry supplier, is going antibiotic-free. In just over two years' time, the company announced Tuesday morning, it plans to eliminate the use of human antibiotics from its U.S. flocks, the final step in a years long process of reform.

This may have been inevitable ever since McDonald's announced it was going to stop purchasing chicken raised with antibiotics that are important to human medicine -- the fast food giant, after all, is one of Tyson's biggest buyers. But it's nonetheless a major development in the growing crisis of antibiotic resistance, in which the misuse and overuse of antibiotics on factory farms is understood to play a role.

And it could, ventures Sasha Stashwick, a policy analyst for the Natural Resources Defense Council, represent a tipping point for the entire industry. Tyson's commitment, she writes in a blog post, means that a third of the nation's poultry producers are now on their way to eliminating the routine use of medically important antibiotics, if they haven't already.

"Antibiotic resistant infections are a global health concern," Donnie Smith, president and CEO of Tyson Foods, said in a statement. "We're confident our meat and poultry products are safe, but want to do our part to responsibly reduce human antibiotics on the farm so these medicines can continue working when they're needed to treat illness." Of course, the industry has also gotten to the point where making the switch is a good business decision: significantly, Smith said that the announcement isn't expected to affect the company's financial performance. Chicken producers have already been experimenting with niche, antibiotic-free lines for some time now, Stashwick told Salon; it's also just easier to make changes to the system when you're working with chickens, whose life cycles are much shorter than cows and pigs. (Tyson said it plans to start looking into ways to reduce antibiotic use in its beef, pork and turkey supply chains soon.)

There's another, more disquieting reason why Tyson may have been able to make this leap: the poultry industry is notoriously consolidated, meaning an edict from the powers that be can quickly be adopted throughout the tightly controlled supply chain. Think of it, if you will, as Tyson taking its evil empire and using it, in this case, for good. That doesn't change the fact that this is still a terrible deal for the famers contracted under the major poultry suppliers, which have a virtual monopoly over the market -- a far more preferable alternative would be for federal regulators to crack down on antibiotic abuse in a real way, as they've so far failed to do.

And because this reform is voluntary on the part of Tyson, the same public pressure that presumably got the company to this point is going to have to see it through to meaningful action. The company said in its press release that it's going to be fully transparent in reporting on its progress over the next two years, but already, Stashwick identifies one major thing it's yet to clarify: what, exactly, are "human antibiotics"? If it means what it sounds like -- antibiotics that are used on humans -- it would mean Tyson's chicken producers could continue to use antibiotics that are "medically important," a larger category that includes drugs not taken by humans, but in the same class as those that are. This is more than just a matter of semantics, because the development of resistance to medically important antibiotics can lead to cross-resistance in human antibiotics.

But there are other benefits, too, to eliminating antibiotics from factory farms. Namely, this could mean positive changes for the chickens. A big reason why poultry are regularly doused with antibiotics, Stashwick pointed out, is that doing so allows them to survive the abysmal conditions on factory farms: antibiotics prevent the very disease that's made more likely by the crowded, stressed and feces-ridden environments in which many chickens raised for human consumption live. Once the antibiotics are no longer part of the picture, she told Salon, other management changes will necessarily follow. "Our hope," she said, "is that this kind of change goes hand in hand with better living conditions for the animals."