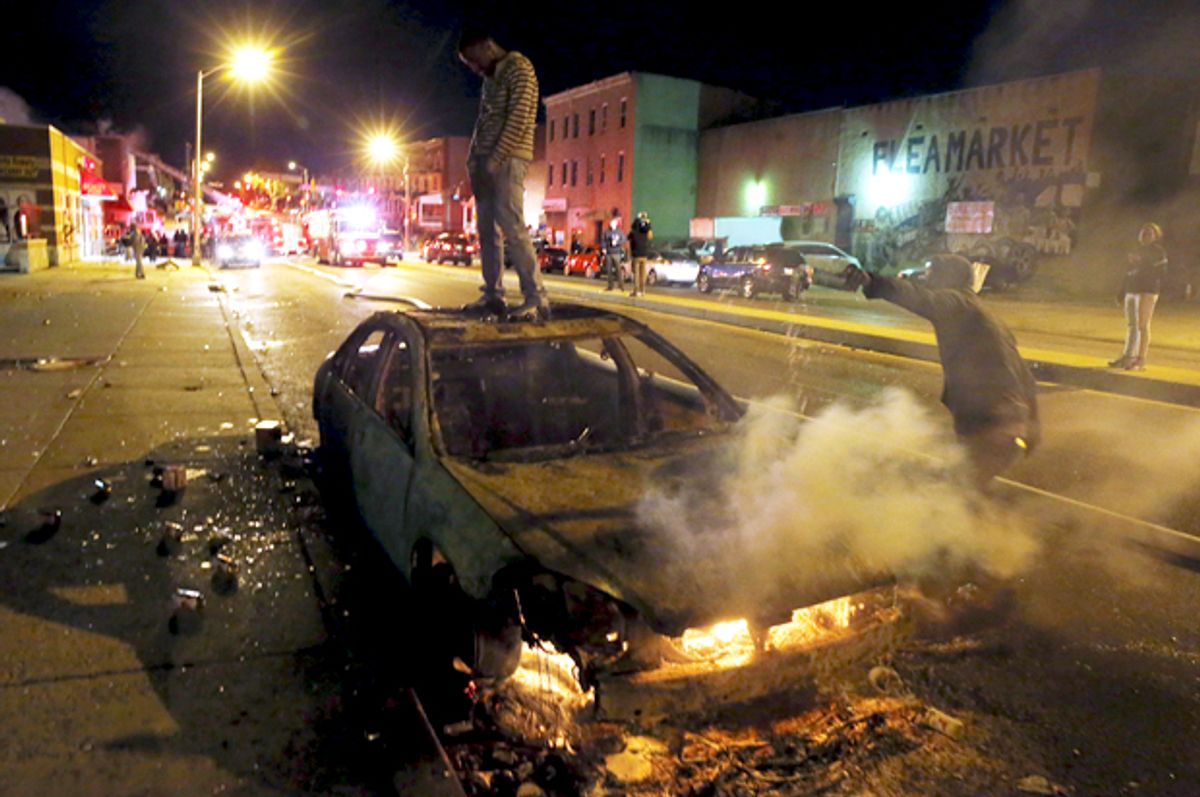 Freddie Gray’s death in the custody of Baltimore police has drawn our attention not only to the terrible history of that police department, but of Gray’s blighted neighborhood, Sandtown-Winchester. Those 72 blocks in West Baltimore are home to more state prison inmates than any other Maryland census tract. The poverty and unemployment rate are double the city average. One out of four juveniles were arrested between 2005 and 2009. The mortality rate for 25-44 year olds -- Freddie Gray was 25 -- is 44 percent higher there than for the same demographic elsewhere in the city, according to the Baltimore Sun.

Sandtown-Winchester sounds like so many other neglected inner-city landscapes of despair, though it’s just a few miles from the city’s gleaming and redeveloped harbor district, and 50 miles from our nation’s capital.

Except Sandtown-Winchester hasn’t been neglected, exactly. In the mid-1990s, it was home to an ambitious community building initiative driven by Maryland megadeveloper James Rouse and the city’s new and ambitious mayor Kurt Schmoke. The work was supposed to help make sure none of this nightmare – Freddie Gray’s awful death at the hands of police; the terrible rioting that’s ensued -- ever happened. But obviously it didn't.

In about eight years, $130 million in public and private funding went into the neighborhood, $60 million from the Rouse Foundation alone. Impressive aspects of the “neighborhood transformation initiative” were featured in Lisbeth Schorr’s influential book “Common Purpose.” George Will praised its work on healthy parenthood as an example of “Jeffersonian democracy” in action. Its success in spotlighting West Baltimore’s problems, but also its capacity for self-renewal, helped the city win designation as a federal Empowerment Zone in 2000.

I spent time in Sandtown-Winchester, almost 20 years ago, documenting the innovative effort for a Rockefeller Foundation survey of community building nationwide. I called it promising, even as I wrote about the problems that would help unravel it: “Sandtown is still a struggling low-income neighborhood, with more than its share of problems. But the vision of rebuilt community is starting to become reality.”

Ultimately, it didn’t. And I didn’t call out the two issues that would doom it: lack of attention to the underlying problem of inner city job flight, and the enduring scourge of police brutality, over-incarceration and the “war on drugs.”

That’s not to say that the Sandtown-Winchester work failed. At least 1,000 new housing units were built, and another thousand renovated. There were reductions in violent crime for a while and infant mortality, too, along with increases in school attendance. But you can’t look at the statistics in the Baltimore Sun profile of Sandtown-Winchester, poignantly headlined “Why Freddie Gray ran,” and call it a success.

Questions about its stumbles resist easy answers. Some critics have said it was too focused on housing alone, but the umbrella organization leading it, Community Building in Partnership, worked on everything from teen pregnancy reduction and outreach to single fathers, to school reform and job training.

It was critiqued as a top-down project driven by an ambitious mayor and wealthy developer, and it certainly was. But there was a surprising surge of community outreach and planning, too: hundreds of meetings, culminating in an inch-thick planning book laying out the community’s vision on housing, employment and more. The project employed 100 residents as block captains and outreach workers, going door to door to link neighbors with prenatal care, Head Start, job training. There were even fledgling attempts at political mobilization. I walked the streets with an organizer named Norman Yancey, who saw himself as a ward captain of old.

Then Rouse died and Schmoke moved on, and the effort sputtered. The recession hit, and much of the infrastructure of the change initiative crumbled. Doni Glover, an activist, radio host and publisher of BmoreNews, who grew up there, charted the course in the local business journal on Monday:

When the Sandtown-Winchester Transformation Project, known as Community Building in Partnership Inc., finally closed down, this community — of which I call home — began to lose all of the very resources that were changing things around for many people. Not only did we lose CBP, we lost our community newspaper, a senior center, an AmeriCorps Program, a job placement office, a high blood pressure program sponsored by Johns Hopkins well as a couple community development corporations. We also lost a program that addressed vacant properties. All of these programs are gone with the wind.

Still, if the recession ultimately swept away most of the effort, the seeds of its undoing were sown a long time ago. Here, I pretty much have to speak for myself, because I was just one individual examining nationwide efforts that many thousands of people have given their lives to. That work goes on. Twenty years later, I’m struck by its optimism, which was a necessary counter to the despair of the Reagan years.

And yet the work couldn’t adequately grapple with the hole at the center of these communities: disinvestment, job flight, wage erosion; the “disappearance of work,” in the words of William Julius Wilson. Foundation-driven community building efforts alone couldn’t power the engines of middle class mobility that helped the white poor and working class move up in the years after World War II.

And if there weren’t organic, dynamic reasons for Sandtown-Winchester residents to get up and go, there were also powerful forces holding them back, chief among them a brutal police department and a cruel “war on drugs,” conducted under Democrats and Republicans alike. If anything, unbelievably, over-incarceration got worse in the 20 years since Baltimore fatherhood activist Joe Jones, now nationally renowned, told me why he started an employment project for single dads, many of them fresh out of prison. Jones began working with mothers, and would run into fathers, who’d say, “Can you get me a job?” He started a range of programs for the fathers, including one, eerily, given that Freddie Gray suffered from lead paint poisoning as a child, to get rid of lead paint in public housing. But of course, it wasn’t enough.

All isn’t lost; there are lessons we can learn from that decade of hard work in Sandtown-Winchester. But it has to be driven by the recognition of what disinvestment, police violence and over-incarceration have wrought. Just before Freddie Gray’s death, Jim Rouse’s biographer looked at the project in a Baltimore Sun op-ed, found it a disappointment, and concluded that maybe some neighborhoods “are too lost to be helped much." I’d put it another way: Maybe we, the wannabe outside saviors, are too lost to be much help.