It's not about Islam, it's about courage: Authors protesting Charlie Hebdo's PEN award are missing the point 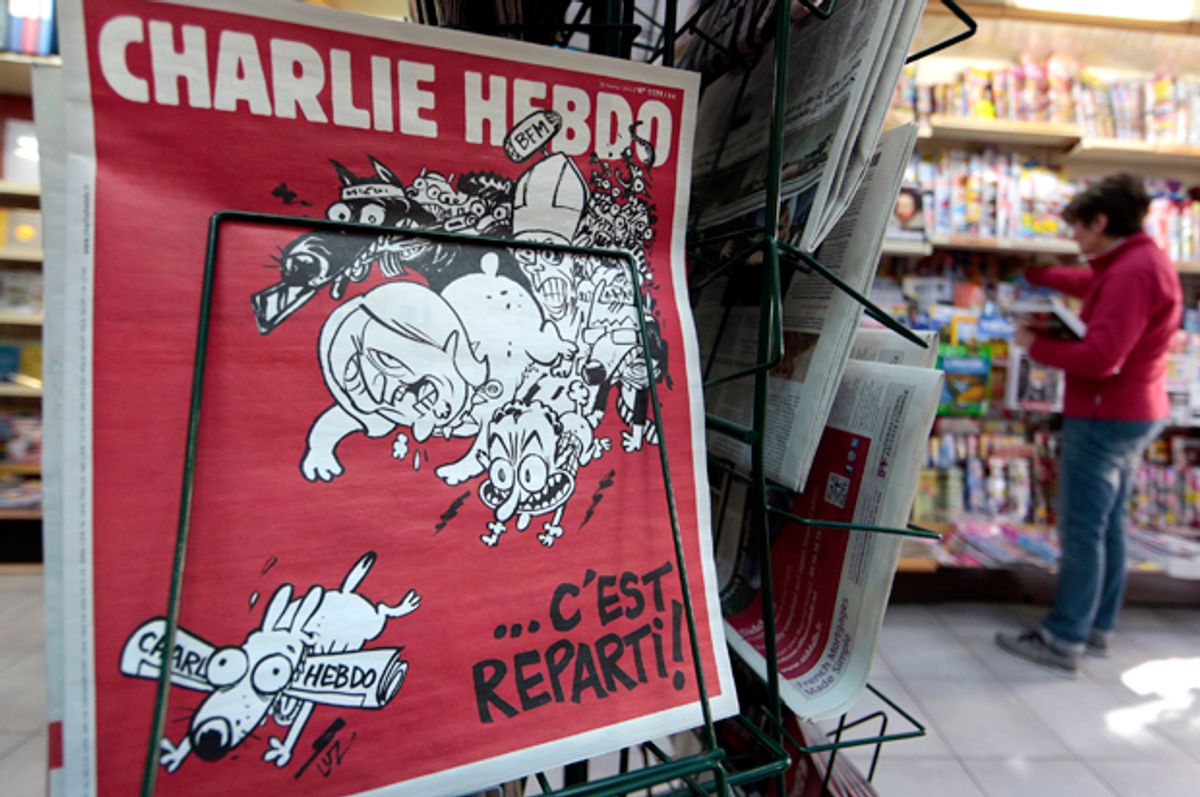 How would the slaughtered staff of the French satirical publication Charlie Hebdo react if they knew their work and their deaths had caused a schism at the PEN American Center, an association of writers and artists dedicated to “working to ensure that people everywhere have the freedom to create literature, to convey information and ideas, to express their views, and to make it possible for everyone to access the views, ideas, and literatures of others?” No doubt they’d cackle derisively, since PEN is composed of exactly the sort of solemn, highbrow types the raunchy, scatological and chronically bratty Hebdo crew loved to mock.

At issue is an award, the PEN/Toni and James C. Goodale Freedom of Expression Courage Award, which the organization decided to present to the surviving staff of Charlie Hebdo at its annual gala on May 5. Six writers slated to act as “literary hosts” — Peter Carey, Michael Ondaatje, Francine Prose, Teju Cole, Rachel Kushner and Taiye Selasi — have withdrawn from the event in protest; Cole had previously criticized the magazine’s “racist and Islamophobic provocations.” Several other PEN members have written to express their disapproval as well, including the celebrated short story author Deborah Eisenberg, who engaged in an extended correspondence with PEN’s executive director Suzanne Nossel, which you can read here.

It’s clear that all of the PEN members who object to giving the award to Charlie Hebdo support the magazine’s freedom to speak and in no way condone the actions of the militants who massacred its staff. “I’m a free-speech fundamentalist,” Cole wrote to the organization, “but I don’t think it’s a good use of our headspace or moral commitments to lionize Charlie Hebdo in particular.”

Fair enough: You can defend the right to speak without admiring the content of the speech. However, PEN’s citation states that “in paying the ultimate price for the exercise of their freedom, and then soldiering on amid devastating loss, Charlie Hebdo deserves to be recognized for its dauntlessness in the face of one of the most noxious assaults on expression in recent memory.” In other words, it is the act of continuing to speak in the face of a murderous effort to silence them that the award commemorates, not the particular content of that speech.

Nevertheless, if Charlie Hebdo were a routine peddler of hate speech — much of which is actually outlawed in France and other European nations — and jailed for it, PEN would not be singling the magazine out for its award. (Eisenberg sarcastically asked why PEN wasn’t also considering “those recently responsible for the desecrations of a Jewish cemetery.”) The content of Charlie Hebdo can’t help but be relevant to this controversy, because there are limits, even if unstated limits, when it comes to the content PEN is inclined to honor with this citation.

At the heart of the ongoing debate about Charlie Hebdo is the question of whether it is possible to satirize or criticize Islam without attacking Muslims. In a fascinating report for the Progressive earlier this year, Jack Craver interviewed ordinary French Muslims — shopkeepers, teachers, cafe operators — about their feelings on the matter. French Muslims are highly secularized: only 41 percent described themselves as “practicing” in a 2011 poll. The more secularized the Muslims Craver spoke with were, the less likely they were to be offended by the magazine. A couple of them grew up reading it and did not perceive its representations of Mohammed as anti-Arab.

But the more religious among the Muslims interviewed do feel wounded by such cartoons. “When you insult our prophet like that, it hurts,” a kebab stand owner said. “There’s liberty of expression but leave religions alone.” Still, they perceive the satire as aimed at the prophet and the religion, not at Muslims as a class. Islam should be sacrosanct, they maintain, because it is a religion, not because it is the faith of a vulnerable group. It seems unlikely they’d change their mind about this exemption if they happened to live in a nation where Islam was the dominant religion.

As Eisenberg sees it, French Muslims are “already embattled, marginalized, impoverished, and victimized, in large part a devout population that clings to its religion for support.” (It isn’t clear on what basis she believes that they are “in large part devout.”) Therefore, “Charlie Hebdo’s cartoons of the Prophet must be seen as intended to cause further humiliation and suffering.” In this light, the magazine’s staff were a bunch of bullies who “expended their courage, and ten of them lost their lives, in what was essentially a parochial, irrelevant, misconceived, misdirected, relatively trivial, and more or less obsolete campaign against clericalism.”

Presumably, Eisenberg and the other PEN members who protest the honoring of Charlie Hebdo would not object if the recipient were, for example, someone like Kamel Daoud, an Algerian novelist who last year became the target of a fatwah issued by an extremist imam. Daoud was condemned as “an enemy of religion” who should be executed by the government for the “war he is leading against God and the prophet.” Daoud’s novel — told from the perspective of the brother of the nameless Arab murder victim in Albert Camus’ “The Stranger” — features a hero who dares to question the authority and relevance of a neighborhood imam. The novelist, a former Muslim, was forced to cancel speaking engagements and to retreat into semi-seclusion after receiving death threats. Unlike Charlie Hebdo, he criticizes Islam from within a society run by Muslims; he’s also unlike Charlie Hebdo because he hasn't been killed. Yet.

Charlie Hebdo’s campaign against clericalism looks a lot less obsolete in this light. This is what makes the magazine’s status among the anti-authoritarian left such a thorny issue. It isn’t always easy to judge where power resides. Islamophobia is a real problem, but so is Islamic fundamentalism — and even just good ol’ fashioned patriarchal religious authoritarianism. Most of the targets of Muslim extremism are other Muslims. Muslim writers, artists and cartoonists are subject to religious censorship on a routine basis across the Muslim world. Islam cannot be simply or easily equated with victimhood, even if Muslims are discriminated against in French society.

And yet even in France, extremist Muslims seized the power to impose the ultimate punishment on the staff of Charlie Hebdo for, in the words of Salman Rushdie, “drawing pictures.” They were able to do so only with the backing of an organized, well-funded international network that, when it comes to criticism of their beliefs, would gladly shut down the speech rights of everyone, regardless of faith or nationality. The attack on Charlie Hebdo was a significant initiative in their campaign to do just that. It was not a one-off, or an uprising of the powerless, even if its organizers are able to play on real grievances to hoodwink young men into executing homicidal and suicidal actions.

As I’ve written before, Charlie Hebdo’s humor is too crude and obvious to appeal to me, but I’m predisposed to favor anyone who takes religious authorities down a peg. Raised in the Catholic Church, I regard anti-clerical campaigns as anything but passé; my own experience suggests to me that some French Muslims might find irreverent portrayals of the prophet, however crass, to be a crowbar prying open the confining box of tradition and piety. I don’t think anyone should be forced into secularism, but history tells us that this is far less of a threat than the compulsion — enforced by the state or by a more intimate community — to believe and observe. For this reason, I feel that no religion should be shielded from ridicule and satire; organized religion is always a form of power.

Rushdie has excellent cause to fear violent Islamic extremism, which Charlie Hebdo always maintained was the true object of its mockery. It’s likely that Eisenberg, a Jew, and Cole, a black man, have a heightened sensitivity to scenarios in which racial caricatures appear in publications indulged or encouraged by a prejudiced state. And from what my French friends tell me, there are all kinds of cultural signals in those cartoons that Anglophones miss, leading them to radically misinterpret the jokes. We’re all entitled to interpret them in our own way, of course, and even to repudiate them for what we think we see there. But what we can’t do with any real credibility is decide what they mean to somebody else.