One small step against the "masculine as default" 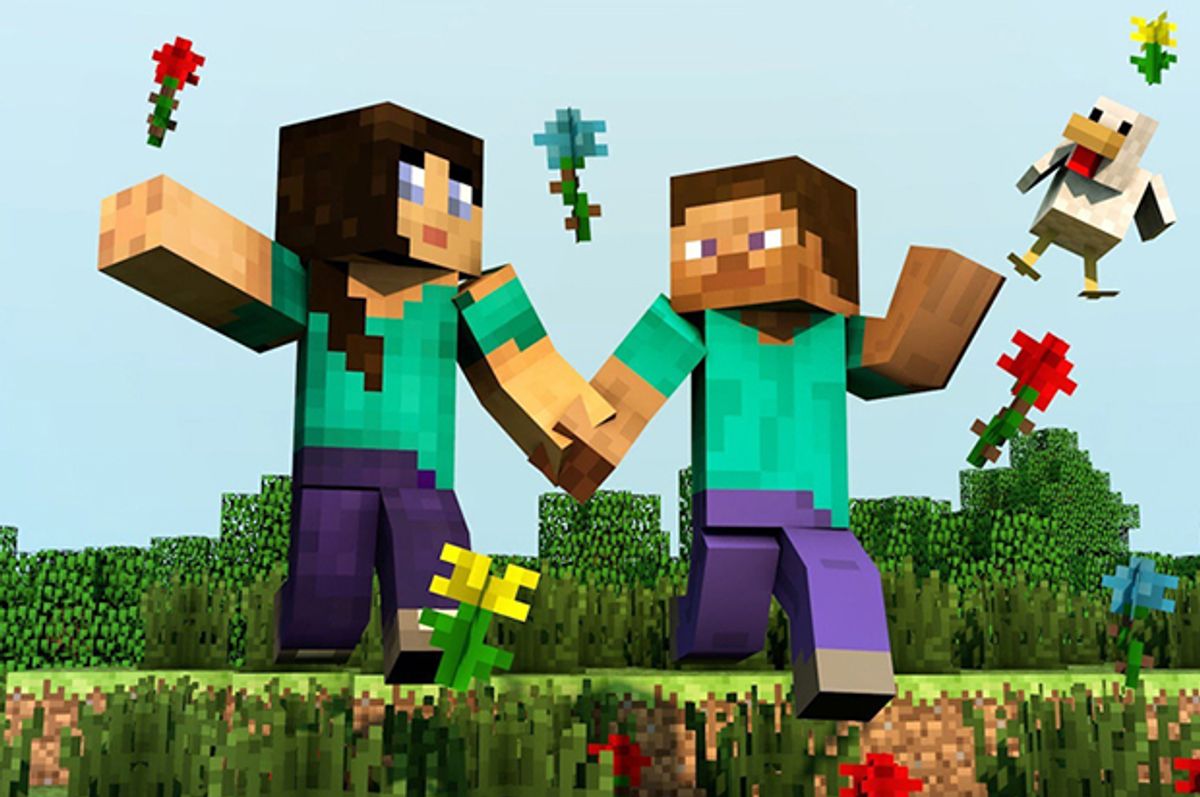 Well, it only took a couple of years. Thanks for really getting it that girls can be game characters too, Minecraft.

One Wednesday, Minecraft will officially introduce Alex, a new and female character to be offered along with the longstanding default figure Steve. Writing on parent company Mojang's blog Monday, Minecraft’s Owen Hill announced, "When most players begin their Minecraft adventure there aren't many looks to choose from. In fact, you only get to play as our blue-shirted friend. Now, everyone loves Steve – he’s probably the most famous minecrafter in the world, and has excellent stubble. But jolly old Steve doesn’t really represent the diversity of our playerbase. For that reason, we're giving all players opportunity to play with an Alex skin instead. She brings thinner arms, redder hair, and a ponytail." Oh, and a male name, but why quibble, right?

The character is already familiar to many players — the Alex skin was introduced on the Minecraft PC version last summer and the mobile version in December. And as far as games go, Minecraft is also already famously female-friendly. As Thea de Gallier noted in The Debrief last fall, the signature blocky figures lack the typically sexist, va va voom window dressing appeal of other games, and Minecraft's family-friendly format has made ardent gamers of a traditionally less catered to audience: kids and moms.

Yet by finally making Alex a free, across the board option, Minecraft is acknowledging the pervasiveness of the masculine as default. Just earlier this month, Temple Run 2 did some similar soul searching and made Scarlett Fox a free character. The decision, notably, came soon after a 12 year-old girl wrote a persuasive Washington Post op-ed in which she observed that in popular "endless running" games, "Of the apps that did have gender-identifiable characters, 98 percent offered boy characters. What shocked me was that only 46 percent offered girl characters. Even worse, of these 50 apps, 90 percent offered boy characters for free, while only 15 percent offered girl characters for free." And she warned, "If our character choices tell us these games aren’t for us, eventually we’ll put them down."

The idea that when we think of a person we are thinking of a male is deeply embedded in our culture, and it affects us in ways big and small. Maybe the fact that a female wasn't a default option on Minecraft all along doesn't seem like a big deal, but it's a reflection of the way that, for example, medical research for decades assumed that a typical patient was a man — and even the typical lab rat was male as well. It's a part of a system in which we have both "literature" and the separate, lesser esteemed genre of "women's literature," "movies" and the separate, much mocked "chick flicks." It's one in which even representations on signs tend to be male — unless there's housework or child care involved.

This is not necessarily overt sexism at work here; it's just often a total lack of looking at things from two perspectives. You have to wonder, for example, if the iPad would have been so named if it had been run past a few more women in the development stage, or if the Apple store's clear staircases were created with consideration for the privacy concerns of human beings who wear skirts. As "BoJack Horseman" creator Raphael Bob-Waksberg has admitted, "The underlying assumption there is that the default mode for any character is male, so to make the characters female is an additional detail on top of that. In case I’m not being a hundred percent clear, this thinking is stupid and wrong and self-perpetuating unless you actively work against it." And if we women make up half the world, it should be pretty obvious that we're not special or unusual characters in our games. We're just characters, just like the guys.